Interpreting interactions in a regression model

A simple question I hope.

I have an experimental design where I measure some response (let's say blood pressure) from two groups: a control group and an affected group, where both are given three treatments: t1, t2, t3. The data are not paired in any sense.

Here is an example data:

What I am interested in is quantifying the effect that each treatment has on the affected group relative to the control group. How would I model this, say using an linear model (for example lm in R)?

Am I wrong thinking that:

which is equivalent to:

is not what I need? I think that in this model the treatment:group interaction terms are relative to the mean over all baseline group and baseline treatment measurements.

I therefore thought that this model:

So perhaps this model:

is the correct one?

Help would be appreciated.

Also, let's say I ran a fourth treatment which is actually the combination of two treatments, say t1+t3, where I don't know what the expectation of their combined effect is: additive/subtractive or synergistic. Is there any way this can be combined?

You should not exclude the intercept. Instead, you should make sure that the control is the reference group for treatment contrasts:

Then you should of course plot your data: 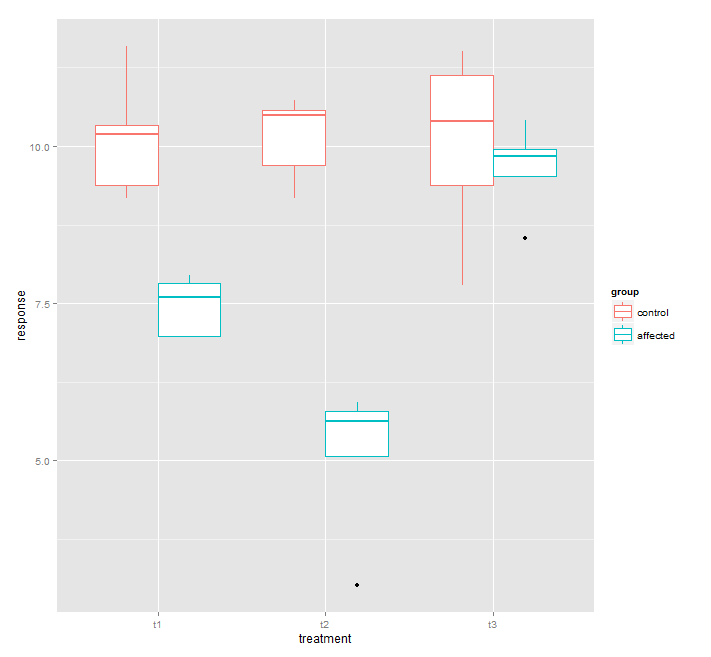 It looks like the control group doesn't differ between treatments and the affected group seems to exhibit lower values for treatments t1 and t2, but not t3.

I would now fit the following model:

Here, the intercept represents the mean of the control group at t1. We see that the control groups at t2 and t3 don't differ significantly from this mean (as the treatment coefficients tell us). We also see that we have a significant difference between the groups at t1 and an even larger difference at t2, but approximately no difference (-2.67 + 2.28) at t3. You could test the significance of the latter using a post-hoc test, but it is probably sufficient to look at the least squares means:

As you see, the confidence intervals of the groups at t3 overlap strongly.

Obviously, you need to employ the usual diagnostics to check for variance heterogeneity, influential points etc.

Not the answer you're looking for? Browse other questions tagged r regression interaction linear lm or ask your own question.