In Jaynes' book "Probability Theory: The Logic of Science", Jaynes has a chapter (Ch 18) entitled "The $A_p$ distribution and rule of succession" in which he introduces the idea of $A_p$ distributions, which this passage helps illustrate:

[...] To see this, imagine the effect of getting new information. Suppose we tossed the coin five times and it comes up tails every time. You ask me what’s my probability for heads on the next throw; I’ll still say 1/2. But if you tell me one more fact about Mars, I’m ready to change my probability assignment completely [that there was once life on Mars]. There is something which makes my state of belief very stable in the case of the penny, but very unstable in the case of Mars

This might seem to be a fatal objection to probability theory as logic. Perhaps we need to associate with a proposition not just a single number representing plausibility, but two numbers: one representing the plausibility, and the other how stable it is in the face of new evidence. And so, a kind of two-valued theory would be needed. [...]

"where $E$ is any additional evidence. If we had to render $A_p$ as a verbal statement, it would come out something like this: $A_p$ $≡$ regardless of anything else you may have been told, the probability of $A$ is $p$."

I'm trying to see the distinction between the two-number idea ("plausibility, and the other how stable it is in the face of new evidence") with just using the Beta distribution which satisfies those criteria. 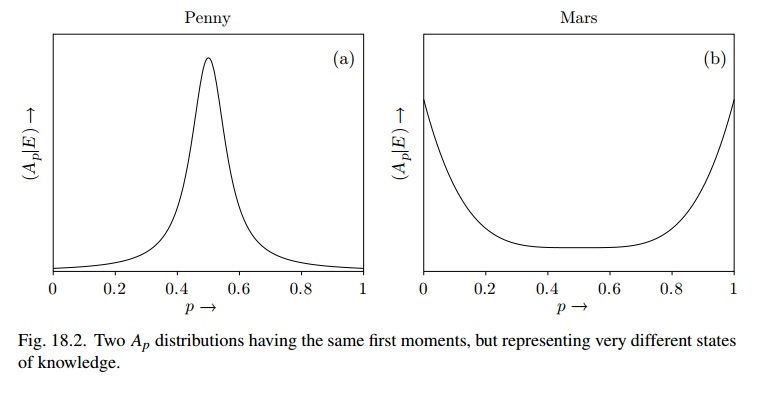 Beta distribution is discussed throughout the book, so am I missing something that the distinction here is subtle and warranting a new theory ($A_p$ distribution)? He does mention in the very next paragraph "It seems almost as if we are talking about the ‘probability of a probability’."

The main point of $A_p$ theory is to describe how cumulative knowledge changes the probability distributions of new observations, given a model.

Jaynes argues that the $A_p$ densities are the core idea to describe how human brain summarizes previous experience into models (inner robot). The inner robot continuously encodes experience updating $A_p$ and combining it into complex forms can be the basis of creativity (Chapter 18.4).

In practice, it is like you said. The difference between the $A_p$ for the coin and Mars examples are captured by the parameters of the $\text{Beta}$ distributions, but the concept is deeper than that.

Not the answer you're looking for? Browse other questions tagged probability bayesian beta-distribution or ask your own question.

2
Does it ever make sense to talk about the confidence (faith) in a probability value?

7
What does Jaynes' continous pdf notation “g(x)dx” actually mean?
5
Posterior distribution for multinomial parameter
2
Calculate the probability that the difference between two populations is >= d
8
Formal justification of Bayesian inference as a model for belief
11
How exactly do Bayesians define (or interpret?) probability?
3
Cox's Theorem: controversy surrounding universal comparability
4
Updating the parameters of a Beta distribution in a “real life” situation