Is it possible to get a negative infinite differential entropy without delta function and limit?

There's no avoiding some kind of limit, because the differentiable entropy itself is defined in terms of an integral (a limit) and the very meaning of "$=\infty$" refers to a diverging sequence. But let's see what we can do with a minimum of fuss.

Since $f_0 \ge 0$ everywhere and is obviously measurable, the function

is a probability density function. (Alas, $f$ is no fun to plot: it rises incredibly rapidly as its argument approaches $0.4284407\ldots$ and so looks just like a spike there. But the spike gets so skinny so quickly that it still has finite area. It's not a delta function, though: $f$ is a genuine function, as you can see from its explicit construction.)

which diverges (compare it to the integral of $x^{-1/2}\mathrm{d}x$): that's what it means for the (negative of the) entropy to be infinite.

This $f$ is a step function, which makes it discontinuous. The construction can be modified to make $f$ continuous--or even continuously differentiable of any order--by using a probability density function $g$ defined on $[0,1]$ which is sufficiently differentiable at the endpoints $0$ and $1.$ (A Beta$(a,a)$ distribution for large $a$ will work.) In the construction multiply $f_0$ by a scale, shifted version of $g.$ That is, replace $f_0$ by the function

Exploit the inequality $x(n) - x(n-1)\lt 1$ (for $n\gt 1$) to establish that the measure of the set $f_0^{-1}[e^n,\infty)$ relative to the interval $x(n)-x(n-1)$ exceeds the measure $\pi$ of the set $g^{-1}[1,\infty),$ which must be positive. This easily shows the summation in the entropy calculation (for the modified construction) exceeds $\pi$ times the summation in the original calculation, whence the modified entropy diverges too.

One problem remains: At the point $\lim_{n\to\infty} x(n),$ where the spike soars to infinity, $f$ cannot be continuous. Address this with an additional modification: instead of defining $f_0$ on the intervals $[x(n-1),x(n)],$ define it on the intervals $[n+x(n-1), n+x(n)].$ This just pushes the probability around and thereby doesn't change the entropy at all. However, it also pushes the problem at the spike off to $+\infty.$ The graph of $f$ looks like an infinite comb with teeth of exponentially increasing heights (and more than exponentially decreasing widths): see the figure. With the preceding modification, each tooth is continuous and merges continuously with the $0$ values between the teeth.

The figure shows the effects of this second modification on the original step function and a smoothed version. Note the semilogarithmic scale. 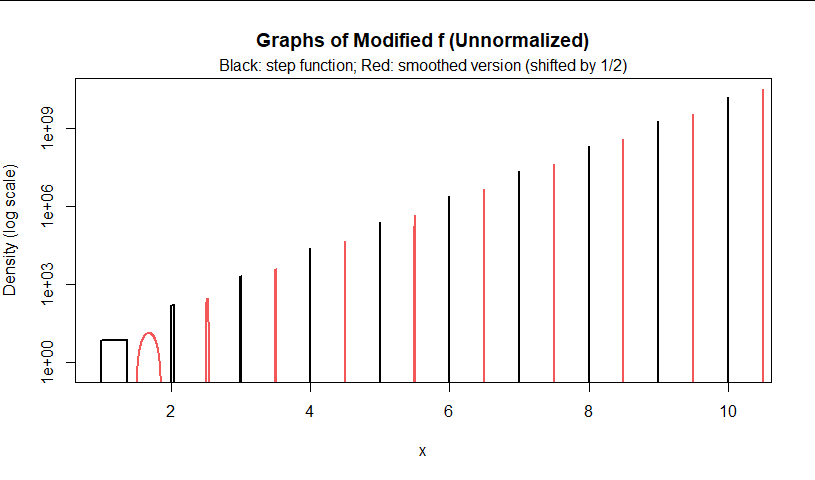 To augment the wonderful answer given by whuber, it is worth noting an additional aspect of dealing with continuous functions defined on the real numbers or subsets of the real numbers. Given a function of this kind, one can define an "extension" function on the closure of the domain (which is a subset of the extended real numbers) which explicitly gives each boundary value a function output equivalent to its limit value. This allows you to work with a function where the limit values are defined explicitly. It also gives a representation of the function that is closer to how these things look in mathematical/statistical computing platforms, where there are explicit values representing positive and negative infinity.

How does this work: Suppose you have a continuous function $H: \mathcal{D} \rightarrow \mathbb{R}$ that is defined on some subset of the real numbers. Continuity of the function means that limits of the function are defined at the boundary points of the domain $\mathcal{D}$ (with some limits possibly being infinite). It is natural to define an extension function on the set of extended real numbers as follows. Define the extension function $H_*: \text{closure}(\mathcal{D}) \rightarrow \bar{\mathbb{R}}$ by:

An example: Consider the real version of the logarithm function $\log: (0, \infty) \rightarrow \mathbb{R}$. This is a continuous function with well-known limits at the boundaries, so we can extend it to $\log_* : [0, \infty] \rightarrow \bar{\mathbb{R}}$ as:

Note: For explanatory convenience, I have denoted the extended functions using different notation than the initial functions, but in practice they are usually denoted with the same notation. For example, the extended logarithm function would usually just be denoted as $\log$ irrespective of its domain.

Not the answer you're looking for? Browse other questions tagged entropy information-theory maximum-entropy or ask your own question.