Neural net with hidden layer performing worse than without?

I'm attempting to train a classifier on a single input vector of length 3000, and trying to predict which of 30 classes each input vector belongs to.

With 1M labeled input/output examples (split 80% training, 20% validate), I can get about 50% accuracy by simply training weights on a 3000 by 30 matrix. In other words, 50% accuracy with no hidden layer.

When I add a hidden layer with 100 neurons, or 500, or 50, I am consistently seeing worse performance than in my network with no hidden layers. I expect this is somehow a function of my hyperparameters, but I have tried tweaking the learning rate and batch size across a wide range of values. I've also tried sigmoid, tanh, and relu outputs on the hidden layer.

No matter what I try, I'm not seeing better than 20% accuracy when I add a hidden layer.

Happy to provide more detail as needed, but basically I'm looking for advice about how to debug (I'm using this as an excuse to explore Tensorflow.) I'd expect that my network with a hidden layer should at least as well as without.

Here is how I'm training the model (note that I've also tried sigmoid and tanh units, and adding a regularization term to my cost). The next_batch function creates a batch by randomly choosing a set of input/output pairs from a pool of about a million lableed examples. If I cut the hidden layer out altogether, it learns just fine.

Training on 500k examples, batched into 50-sample batches, with a test evaluation after every 200 batches:

Note that attempting to lower the learning rate and resume after these 500k training samples produced no improvement in accuracy or cost.

Here are my thoughts on what could be going wrong:

Accuracy (what is being measured)

Perhaps your network is in fact doing well.

No matter what I try, I'm not seeing better than 20% accuracy when I add a hidden layer.

If the accuracy is 20%, just negate the output and you have 80% accuracy, well done! (well at least for the binomial case).

I believe that in your case the accuracy is misleading. This is a good read on the matter. For classification, the AUC (area under the curve) is often used. It's common to also examine the Receiver operating characteristic (ROC) and the confusion matrix.

For the multi-class case this becomes more tricky. Here is an answer that I found. Ultimately, this involves a strategy of 1-vs-rest or 1-vs-1 pairs, more on that here.

As to the learning rate and momentum, if you're not in a big hurry, I would just set a low learning rate and the algorithm will converge better (although slower). This is valid for stochastic gradient descent where examples are shown at random (are you shuffling the data?). From your code I can't figure out how this happens. Are you going one pass only through the training data? For SGD, multiple iterations are made. Perhaps try smaller batches? Have you tried weight decay as a regularization method?

Might be a longshot at this point but have you tried projection to a higher dimension in the first hidden layer then collapsing to a lower space in the next one two hidden layers?

There is also the cost in your output, I wonder if it could be scaled to make more sense. I would try to plot the evolution of the cost (log loss here) and see if it fluctuates or how steep it is. Your network might be stuck in a local minima plateau. Or it might be doing very well in which case double check the metric?

Hope this helped or generated some new ideas.

Example of how normalization (L2) can make things worse when features are not scaled relative to the other features. Plots for one sample:

In the left image the blue line is a vector of 10 values generated randomly with a mean zero and std of 1. In the right image I added an 'outlier' or out of scale feature no.6 where I set its value to 10. Clearly out of scale. When we normalize the out of scale vector, all other features become very close to 0 as it can be seen in the orange line on the right.

Standardizing the data might be a good thing to do before anything else in this case. Try plotting some histograms of the features or box plots.

You mentioned you are normalizing the vectors to sum up to 1 and now it works better with 10. That means you are dividing by the 1-norm = sum(abs(X)) instead of the 2-norm (Euclidean) = sum(abs(X).^2)^(1/2). The L1 normalization generates sparser vectors, look at the figure below, where each axis is one feature, so this is a two dimensional space, however it can be generalized to an arbitrary number of dimensions. 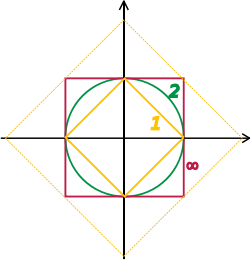 Normalizing effectively places each vector on the edge of either shape. For L1 it will lie on the diamond somewhere. For L2 on the circle. When it hits the axis it is zero.

93
How to plot ROC curves in multiclass classification?