Relation between confidence interval and testing statistical hypothesis for t-test

Yes, there are some simple relationships between confidence interval comparisons and hypothesis tests in a wide range of practical settings. However, in addition to verifying the CI procedures and t-test are appropriate for our data, we must check that the sample sizes are not too different and that the two sets have similar standard deviations. We also should not attempt to derive highly precise p-values from comparing two confidence intervals, but should be glad to develop effective approximations.

In trying to reconcile the two replies already given (by @John and @Brett), it helps to be mathematically explicit. A formula for a symmetric two-sided confidence interval appropriate for the setting of this question is

where $m$ is the sample mean of $n$ independent observations, $s$ is the sample standard deviation, $2\alpha$ is the desired test size (maximum false positive rate), and $t_\alpha(n)$ is the upper $1-\alpha$ percentile of the Student t distribution with $n-1$ degrees of freedom. (This slight deviation from conventional notation simplifies the exposition by obviating any need to fuss over the $n$ vs $n-1$ distinction, which will be inconsequential anyway.)

Using subscripts $1$ and $2$ to distinguish two independent sets of data for comparison, with $1$ corresponding to the larger of the two means, a non-overlap of confidence intervals is expressed by the inequality (lower confidence limit 1) $\gt$ (upper confidence limit 2); viz.,

This can be made to look like the t-statistic of the corresponding hypothesis test (to compare the two means) with simple algebraic manipulations, yielding

The analysis so far justifies the reply by @Brett: there appears to be no simple relationship available. However, let's probe further. I am inspired to do so because, intuitively, a non-overlap of confidence intervals ought to say something!

First, notice that this form of the hypothesis test is valid only when we expect $s_1$ and $s_2$ to be at least approximately equal. (Otherwise we face the notorious Behrens-Fisher problem and its complexities.) Upon checking the approximate equality of the $s_i$, we could then create an approximate simplification in the form

Here, $s \approx s_1 \approx s_2$. Realistically, we should not expect this informal comparison of confidence limits to have the same size as $\alpha$. Our question then is whether there exists an $\alpha'$ such that the right hand side is (at least approximately) equal to the correct t statistic. Namely, for what $\alpha'$ is it the case that

It turns out that for equal sample sizes, $\alpha$ and $\alpha'$ are connected (to pretty high accuracy) by a power law. For instance, here is a log-log plot of the two for the cases $n_1=n_2=2$ (lowest blue line), $n_1=n_2=5$ (middle red line), $n_1=n_2=\infty$ (highest gold line). The middle green dashed line is an approximation described below. The straightness of these curves belies a power law. It varies with $n=n_1=n_2$, but not much. 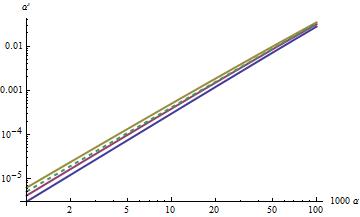 The answer does depend on the set $\{n_1, n_2\}$, but it is natural to wonder how much it really varies with changes in the sample sizes. In particular, we could hope that for moderate to large sample sizes (maybe $n_1 \ge 10, n_2 \ge 10$ or thereabouts) the sample size makes little difference. In this case, we could develop a quantitative way to relate $\alpha'$ to $\alpha$.

This approach turns out to work provided the sample sizes are not too different from each other. In the spirit of simplicity, I will report an omnibus formula for computing the test size $\alpha'$ corresponding to the confidence interval size $\alpha$. It is

This formula works reasonably well in these common situations: 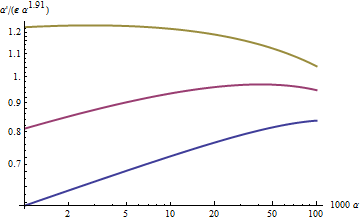 This is more than good enough for eyeballing a bunch of confidence intervals.

To summarize, the failure of two $2\alpha$-size confidence intervals of means to overlap is significant evidence of a difference in means at a level equal to $2e \alpha^{1.91}$, provided the two samples have approximately equal standard deviations and are approximately the same size.

This result justifies (and I hope improves upon) the reply by @John. Thus, although the previous replies appear to be in conflict, both are (in their own ways) correct.

No, not a simple one at least.

This is not the same as overlap between confidence intervals for each of the two means.

Under typical assumptions of equal variance, yes, there is a relationship. If the bars overlap by less than the length of one bar * sqrt(2) then a t-test would find them to be significantly different at alpha = 0.05. If the ends of the bars just barely touch then a difference would be found at 0.01. If the confidence intervals for the groups are not equal one typically takes the average and applies the same rule.

Alternatively, if the width of a confidence interval around one of the means is w then the least significant difference between two values is w * sqrt(2). This is simple when you think of the denominator in the independent groups t-test, sqrt(2*MSE/n), and the factor for the CI which, sqrt(MSE/n).

There's a simple paper on making inferences from confidence intervals around independent means here. It will answer this question and many other related ones you may have.

0
Trying to migrate from P values to CI... how to know when to reject null hypothesis?
1
Introductory Statistics, Hypothesis testing vs CI
1
Interpretation of values contained in a confidence interval
1
Intuition For Overlapping Confidence Intervals and Statistical Significance
1
Looking at the plot of two sample's distribution of means which are compared cannot reveal significance?
0
Given two non-overlapping confidence intervals, calculate confidence interval for difference between means
15
Alternative graphics to "handle bar" plots
12
If p-value is exactly 1 (1.0000000), what should the confidence interval limits be to support null hypothesis being true?
24
Safely determining sample size for A/B testing
14
Can you explain why statistical tie is not naively rejected when $p_1-p_2 < 2 \,\text {MOE}$?
See more linked questions