I know that Kendall's tau is given by:

However I cannot see how this gives:

Where $S$ and $R$ are ranks and $n$, the number of samples. Is there a standard undergraduate textbook that covers this? Clearly the first equation can be written as:

But there is seems to be an assumption or reason that:

Tau is an "indicator" version of covariance.

Recall this image from How would you explain covariance to someone who understands only the mean: 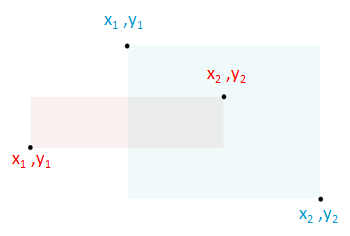 The cyan pairs are "negatively" oriented (or "discordant"): the larger of the x-coordinates is associated with the smaller of the y-coordinates, and vice versa. The association is negative.

Any scatterplot of $n$ points $(x_i, y_i), i=1, 2, \ldots, n$ determines $\binom{n}{2}=n(n-1)/2$ such rectangles, because each rectangle is uniquely associated with an unordered pair of those points. Whereas the covariance averages the (signed) areas of these rectangles, Kendall's Tau averages their signs. That's all the formulas are doing.

There are two ways to understand the initial probability statement. One is the empirical probability. It contemplates writing each unordered pair of points in a sample, $\{(x_i,y_i), (x_j,y_j)\},\ i\ne j,$ on a slip of paper. Also on each slip write $+1$ for the concordant pairs and $-1$ for the discordant pairs. Put those slips into a box, mix them up, and randomly draw one out. The expression

That probability-weighted sum of values on the tickets is, by definition, an expectation. Obviously it is the expected value of the signs on those slips of paper.

$\tau$ is the average value of the signs of the rectangles in the scatterplot.

The average in the box is obtained, of course, by adding up all the values and then dividing by the number of tickets in the box. That's precisely the formula for $\tau$ in the question.

This description extends to any box of pairs of tickets constructed in this manner. Thus, $\tau$ can also be thought of as a property of any bivariate distribution. For distributions with infinite support (such as continuous distributions), it would have to be computed as a double integral rather than a sum, but that changes nothing about the underlying ideas or interpretations.

Not the answer you're looking for? Browse other questions tagged mathematical-statistics kendall-tau or ask your own question.

231
How would you explain covariance to someone who understands only the mean?

4
How to show this curious combination of Exponential order statistics has a Chi-squared distribution?
5
Population version of Kendall's tau
4
Prove that $ \mathbb{E}[XY] - \mathbb{E}[X] \mathbb{E}[Y] = \int_{- \infty}^\infty \int_{- \infty}^\infty (F(x,y)-F_X(x) F_Y(y)) \,dx\,dy,$
3
Why is Kendall's tau not consistent?
6
How to justify that $(Y_1,Y_2)$ is not bivariate normal without finding its exact distribution?
1
Finding the MVUE from two independent random samples
1
Why Kendall's Tau-c?
1
Bivariate probability inequality into an integral
0
Test statistics for hypothesis that values in one group always larger than the other group