Testing for significant differences in skewness

How do you test for significant differences in skewness across two distributions of citation data, using R? I'm trying to compare the two power-law distributed histograms below (I'm just using histograms to visualize it, the data is not actually reduced to histograms). The sample sizes are 121 and 85 respectively. The skewness is very different (roughly 3 and 6 respectively), but how do I test if this difference is significant? 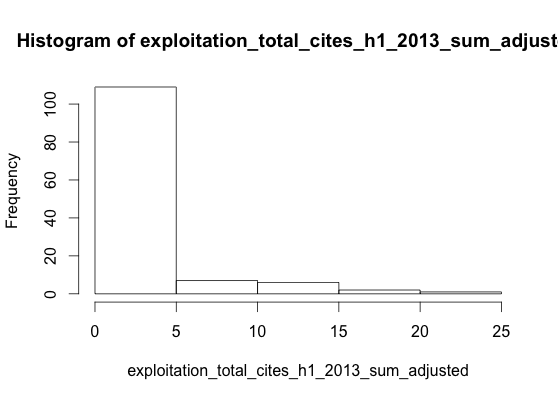 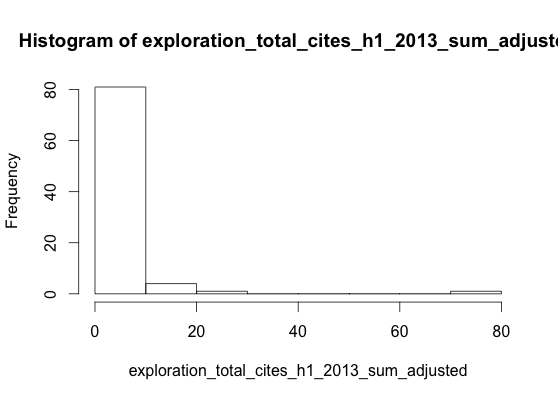 Presumably your variable is continuous (otherwise a histogram like that would be a really bad choice of display), so I assume by "power-law" distribution you intend the Pareto, $f_X(x;\alpha,c) = \frac{\alpha}{c}\left(\frac{x}{c}\right)^{-\alpha-1}\cdot\mathbb{I}_{x>c}$, and by the look of it, with a common value for $c$ for your two populations (not that it matters all that much for this, but it's simpler in that case).

If the lower bound, $c$ is known (for an unshifted Pareto it would have to be $>0$), then $\log(x/c)$ is exponential and you're dealing with comparing scale parameters of exponentials, which could be done in a couple of ways, (for example, you can derive an F-test for equality of exponential parameters) but I'd probably just do it via a GLM unless the sample sizes were fairly small.

If $c$ is unknown it's a little bit more involved, and if $c$ is not the same for both, there's a little more to it again, but both cases would be doable.

If you only expect it to be a power-law above some threshold, then there's some more discussion required.

If your variable is a count (a possibility you gave no indication of, but it now occurs to me that you might have that case) you're dealing with a different situation again, and presumably want a zeta distribution or Zipf's law.

Edit: It now appears you do have a count. This is critical information and should have been made clear to start with. Your histogram is both not very informative and actively misleading, so it helped lead me astray. I'll come back and edit some more, but for now, some advice (besides "explicitly mention when your data are counts"): 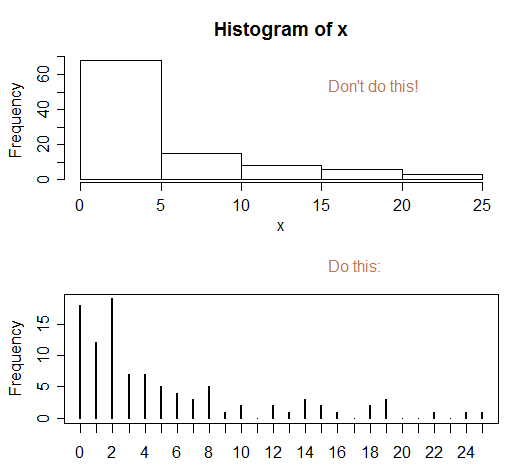 I made that second plot using something like
plot(table(factor(x,levels=(min(x):max(x)))),ylab="Frequency") and the third one using a similar command followed by points (on the same argument) with type="p" and pch=16.

Not the answer you're looking for? Browse other questions tagged r hypothesis-testing skewness or ask your own question.