If we do not know the normalizing constant for a posterior distribution, why does it imply we can only sample dependent draws?

Suppose we want to draw from our posterior distribution $p(\theta|y)$, but we cannot sample independent draws from it. For example, we often do not know the normalizing constant.

If you know a density $f(\cdot)$ up to a normalising constant,$$f(x)\propto p(x)$$there are instances when you can draw independent samples, using for instance accept-reject algorithms: if you manage to find another density $g$ such that

produces iid simulations from $f$, even though you only know $p$. 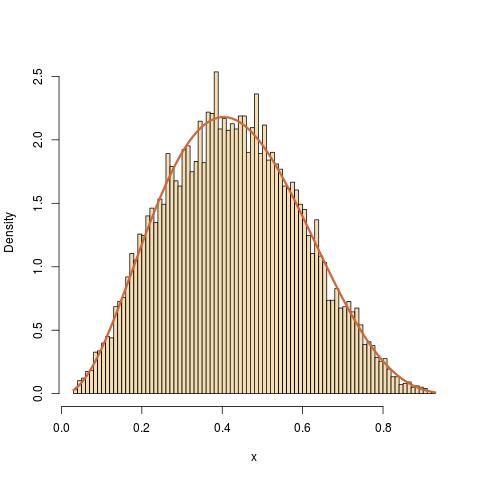 In practice, finding such a $g$ may prove a formidable task and an easier approach is to produce simulations from $f$ by Markov chain algorithms, such as the Metropolis-Hastings algorithm. Given $p$, you chose a conditional distribution with density $q(y|x)$, for instance a Gaussian centred at $x$, and run the following algorithm:

It will generate a sequence $x_0,x_t,\ldots$ which has the following properties

To get back to the Beta example, if I use for $q(\cdot|x)$ the normal density with mean $x$ and variance $1$, the code of the Metropolis-Hastings algorithm is

(where the constant in dbeta(x,a,b) does not matter). The result gives a perfect fit to the Beta B(3.3,4.4) distribution, while the sample is correlated. 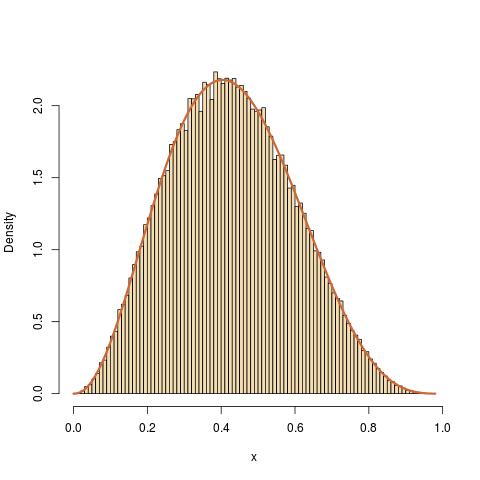 Another possibility is to use the uniform U(0,1) as transition, independently of the current value:

with a similar great and even greater fit. Once again, the sample is made of dependent random variables. 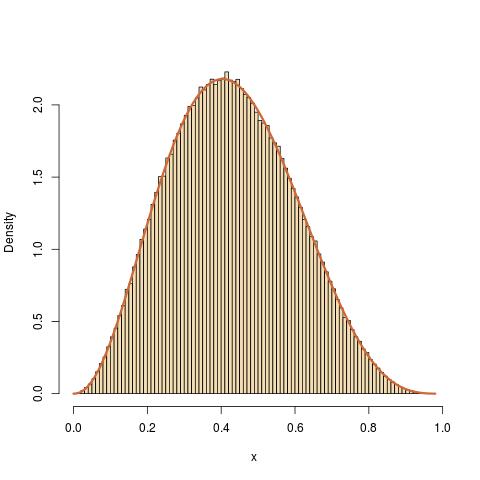 7
What does it mean intuitively to know a pdf "up to a constant"?
6
What is the most computationally efficient way to sample from an unnormalized density?

12
MCMC; Can we be sure that we have a ''pure'' and ''large enough'' sample from the posterior? How can it work if we are not?
6
Bayesian MCMC when a likelihood function cannot be written
3
Monte Carlo simulation of posterior distribution
1
On the predictive distribution of a Bayesian structural time-series model
2
MCMC with using MAP as starting value
5
Is my understanding of the Metropolis sampling algorithm correct?