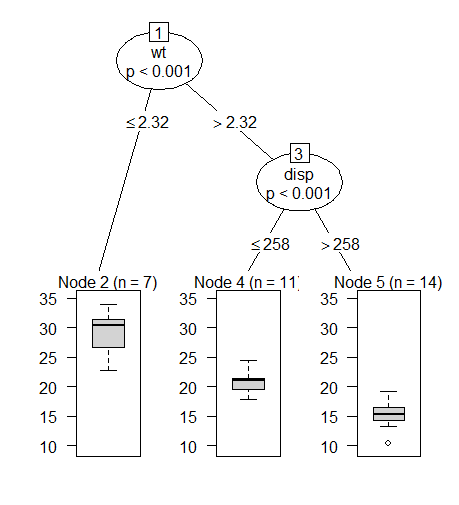 The plot gives me the distribution at each terminal node, but is it possible to extract the actual regression coefficients associated with a terminal node or am I misunderstanding how ctree works?

In conditional inference trees there is no regression model fitted in the nodes (unless you use a non-standard transformation function). Thus, in your example the prediction is simply based on the mean of the response in each terminal node.

If you want to fit a tree with regression models in each node, consider using lmtree or glmtree from the partykit package (based on the mob algorithm).

Not the answer you're looking for? Browse other questions tagged machine-learning cart or ask your own question.

5
Analyzing CART type trees in R--options for grouping results, formatting plots
5
Residual plot for regression tree: What should it look like?
3
How can I cluster data in a grid-like fashion and heat map the averages in R?
2
How do Conditional Inference Trees do binary classification?
1
Random Forest for Regression: How does a decision tree decides the value of a terminal node when outcome is many continues values?
2
What are the final predictions in tree based models?
4
Please correct my assumption on how regression trees work