Based on data from a scenario-based experiment, I am running a $2\times2\times2$ ANCOVA with one continuous covariate (sample size 320). Without including the covariate, the ANOVA model and two of the main effects are significant on the 5% level. However my $R^2$ is only around 3%.

The assumptions for including the covariate are met. How should/can I interpret such a result? Does it mean that the manipulated variables do only have a minor effect on the dependent variable and explain much less than the covariate? If so, is the experiment actually useless as the manipulated variables barely explain variance of the dependent variable?

When you run the ANOVA you get a unique prediction for each cell. So if you have 320 observations you have about 40 per cell. Since each of them gets the same prediction there is bound to be a lot of residual variability unaccounted for. When you add a covariate which has many values there will be many different predictions which can potentially be closer to the actual values leading to the phenomenon you observed.

Interpreting group differences in an ANCOVA

A quick example to illustrate: Let's say you're testing the effectiveness of a weight loss program. You randomly assign pariticipants to either your weight loss program or a control group. At the end you measure their weight. Now, if you tried to test the effectiveness of your program by just comparing the end weights of people in your program vs. the control, that would be silly --- their weight at the end of the program will be strongly related to their weight going into the program! Just examining the end weights could be misleading. For example, if it just so happened that folks randomly assigned to your program were lighter on average to begin with, then showing that they're lighter at the end doesn't necessarily mean anything. What you really want to do is to look at their weights at the end of the study controlling for their weights going in, i.e. the change in weight. This is a case where an ANCOVA is a great model, because you know there's an important covariate (weight before starting the program) and you want to look at the effect of group assignment (treatment vs. control) after controlling for that covariate.

What it means is that you're asking a different question than you ask in an ANOVA. With an ANCOVA, you're looking for differences in the estimated marginal means (aka conditional means, adjusted means, or least-squares means, depending on the software you're using and your field). You're generally not asking whether the covariate or the grouping variable(s) are more important. Instead, you're assuming that the covariate is important, and you're partialing it out so that you can look at the group differences after removing the covariate's effect from the data.

The second part of this question ("is the experiment actually useless") is really a question about effect sizes.

How to tell if your effects matter

Significance tests (i.e. your p values) depend strongly on sample size. It can be very hard to tell whether, for example, the group differences you're seeing are meaningful by looking at significance tests alone. I encourage you to look at effect size estimates (e.g. partial $\eta^2$) in addition to significance tests, so that you can get a better sense for how big these differences actually are.

Similarly, plotting your data can provide a great reality check, especially in cases where the effects are harder to interpret from the numbers alone (such as interpreting group differences in an ANCOVA vs. an ANOVA, as you point out).

Example code and output in R

(Note that some of the output has been truncated to keep the post more readable.)

Since we have an ANCOVA in mind, test the assumption of homogeneity of slopes:

It looks like the assumption is met (i.e. there's no interaction between the covariate and the grouping variable), which is unsurprising since I generated the data as an ANCOVA example. ;)

Check out the results of an ANOVA analysis and an ANCOVA analysis, like you did your question:

These data are similar to yours in that including the covariate makes a big difference ($R^2$ jumps from .06 in the ANOVA to .53 in the ANCOVA). Let's break that down.

Get effect size estimates to measure the importance of the grouping variable in the ANCOVA model. Partial eta squared is pretty easy to calculate by hand if you have the sums of squares for each effect, so that's how I usually do it. There's probably a package that provides a nice function for this, though, if you prefer.

This produces a nice-looking table that inlcudes partial eta squared for each effect:

This shows that, yes, the covariate has a big effect, but the grouping variable also has a pretty sizable effect in the ANCOVA. What counts as a "big" effect varies a lot by context (and research field), but .15 is definitely nothing to sneeze at in the social sciences (where I got my training). Remember that this test of group differences is asking a fundamentally different question from the test in the ANOVA; you're measuring weight loss here, not just overall weight at the end of the study.

Note there are lots of other estimates of effect size you could consider here, and pros and cons of each. Here is a nice CV post to get your started on some of those considerations.

This plot (p) is just a scatterplot of all of the participants in my (made-up) weight loss study. They are colored by group assignment, but as you can see, their weight at the end of the study is largely a function of their weight coming in. 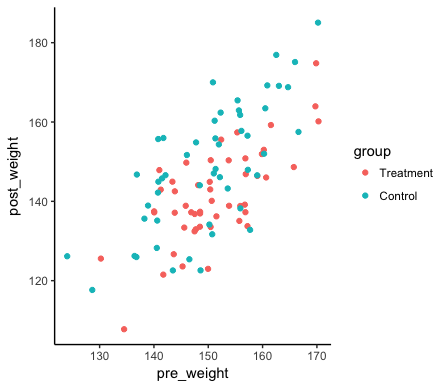 We can add regression lines for each group with stat_smooth: 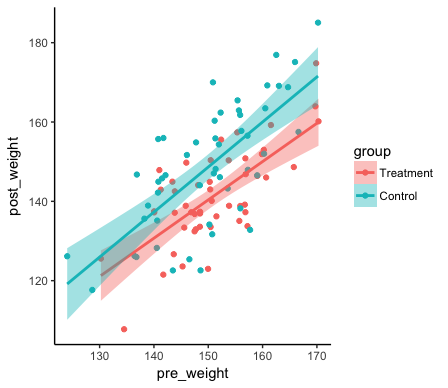 This helps to make clear that while pre_weight has a large predictive effect for post_weight (the slopes of both lines are clearly non-zero), there is also an effect of group assignment: People assigned to the treatment group have a lower post_weight after controlling for pre_weight than people in the control group do (the regression line for Treatment is lower than for Control).

It's difficult to tell since you are not providing sufficient background information regarding your experiment and the nature of your independent variables (IVs) - especially the nature of the covariate. Ideally provide a snapshot of your dataset, the output of your analysis incl. the code you ran to generate that output.

The reason that the two main IVs came out significant, even without including the covariate, is probably due to your large sample size of 320.

After adding the covariate things change and your $R^2$ goes up, which to me suggests that your covariate explains quite a bit of the variation in your dependent variable (DV). On that note, how did you decide that the assumptions for using the covariate were met?

Generally, I would say that your IVs did not manipulate the outcome in a way you would expected it, i.e. the IVs did not quite support your tested hypothesis (or better, left you with a good amount of unexplained variation).

Is the experiment useless? I don't think so. No experiment is useless since you had an initial hypothesis to test. Now comes the important part and thinking about why the IVs showed a rather weak influence on your DV. Also, it might be worthwhile thinking about why the covariate had such a big influence on your DV? There might be something interesting about this covariate which should be discussed and followed up upon.

Not the answer you're looking for? Browse other questions tagged anova experiment-design r-squared ancova predictor or ask your own question.

7
Checking factor / covariate independence in ANCOVA
5
Repeated-measures ANCOVA in R?
7
ANCOVA in observational studies: what are the assumptions?
0
Can you put more than one factor in ANCOVA analysis?
1
Multivariate analysis (Ancova)
0
ANCOVA or Multiple Regression
1
p-value of Covariate differs between Regression and ANCOVA