I have fitted a two stage generalized additive model to zero inflated data ("hurdle model"). I am modeling fishery spatial data (catch rates) as a function of different environmental variables (temperature, Chlorophyll, etc). I would like to predict fish abundances, but I'm kind of lost with the procedure.

I have used GAMs and linear models before, so I'm familiar with the predict functions in R. However, I now have two models for one single prediction (such as fish abundance given probability of occurence, or the prediction of the count model given the prediction of the binomial model). My first approach was to multiply the predictions, but that would assume that both events are independent, which is not the case. I also explored conditional probability, but without much success.

This is a nice question.

You don't specify what R packages and functions you use, so I'll take the excellent vignette for the pscl package and walk along that. Specifically, I'll jump off the description of a hurdle model in section 3.5.

As described in the vignette, you can download the example data file here. Save it locally. Then we can load it, extract the columns we want, load the package and fit a hurdle model:

Now, we can look at the specific predict method for objects of class hurdle like this:

The key parameter is type. By default, this is "response", that is, the conditional mean given covariates:

Thus, our point prediction for this new instance is 6.68.

However, I'd argue that the point prediction is definitely not everything. After all, we are fitting a specific hurdle model because variance is "nonstandard" - we have zero inflation. So we should definitely try to get an idea of the overall shape of the likely response. This means that we really want the full predictive density. Happily, we can get that using type="prob":

Let's visualize that, including the predicted mean as a vertical line: 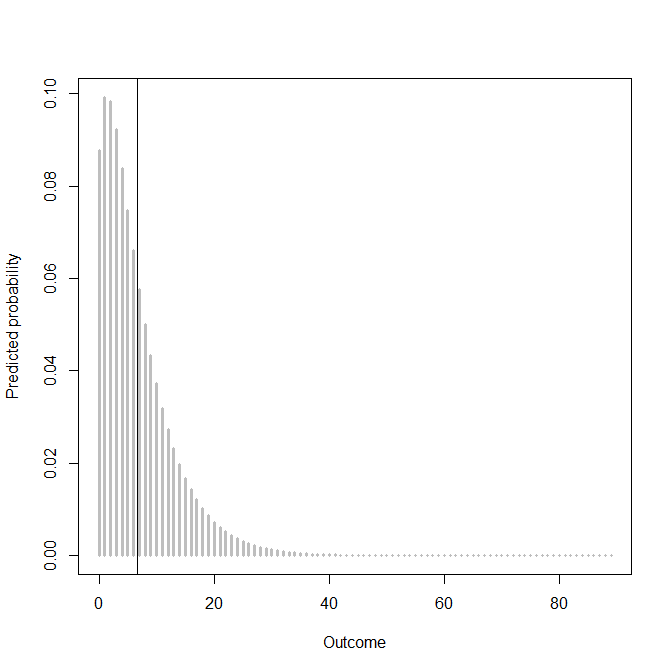 For double-checking, we can recover the predicted mean from the predictive density (up to numerical accuracy):

You can also have predict.hurdle give you

If you use a different function, this may give you some ideas but may not be enough. You may then want to post a follow-up question focusing on the R aspects at StackOverflow in the R tag.

Not the answer you're looking for? Browse other questions tagged prediction generalized-additive-model zero-inflation or ask your own question.