A structure will fail if subjected to a load greater then its own resistance:

We can assume that the load and the resistance are independent. 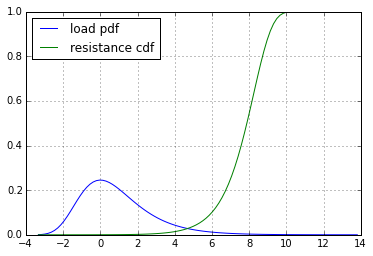 I'm trying to teach myself statistics, but sometimes without a good reference it's difficult to know what to look for. What this "tool" would be called by the way? I'm sure there's a proper name for this.

As a practical matter, $X$ and $Y$ are likely to take on nonnegative values only, in which case the above integral need only be on the positive real line.

Rephrased, the probability of failure is equivalent to the probability that resistance - load is less than zero. What you're looking for is the distribution of the difference of random variables.

Since these are independent, you can use convolution to solve for their difference. But it's applied to the densities, not a cumulative density. Also, the convolution is itself an infinite integral. Let $X$ represent load, $Y$ resistance. You'd want to convolve $p_{X}(-t)$ and $p_{Y}(t)$, called the cross-correlation in signal processing:

Strictly, cross-correlation is equivalent to the convolution of $p_X^*(-\tau)$ and $p_Y(\tau)$, where the asterisk is the complex conjugate. Since densities are real-valued, $p_X^*(-\tau) = p_X(-\tau)$ and there's no need to worry.

Not the answer you're looking for? Browse other questions tagged probability density-function terminology cumulative-distribution-function or ask your own question.

9
Discrete analog of CDF: "cumulative mass function"?
4
Cumulative distribution function: what does $t$ in $\int\exp(-t^2)dt$ stand for?
2
How to derive the cdf of a lognormal distribution from its pdf
4
How to compute the median of a continuous distribution?
5
CDF*[1-CDF]/PDF --- name? integrable?
3
What should the integral of a CDF be called?