How to fit an ARIMAX-model with R?

I have four different time series of hourly measurements:

I want to be able to predict the heat consumption inside the house. There is a clear seasonal trend, both on a yearly basis, and on a daily basis. Since there is a clear correlation between the different series, I want to fit them using an ARIMAX-model. This can be done in R, using the function arimax from the package TSA.

I tried to read the documentation on this function, and to read up on transfer functions, but so far, my code:

where the black line is the actual measured data, and the green line is my fitted model in comparison. Not only is it not a good model, but clearly something is wrong.

I will admit that my knowledge of ARIMAX-models and transfer functions is limited. In the function arimax(), (as far as I have understood), xtransf is the exogenous time series which I want to use (using transfer functions) to predict my main time series. But what is the difference between xreg and xtransf really?

More generally, what have I done wrong? I would like to be able to get a better fit than the one achieved from lm(heat ~ tempradiwind*time).

Edits: Based on some of the comments, I removed transfer, and added xreg instead:

where dayy is the "number day of the year", and time is the hour of the day. Temp is again the temperature outside. This gives me the following result: 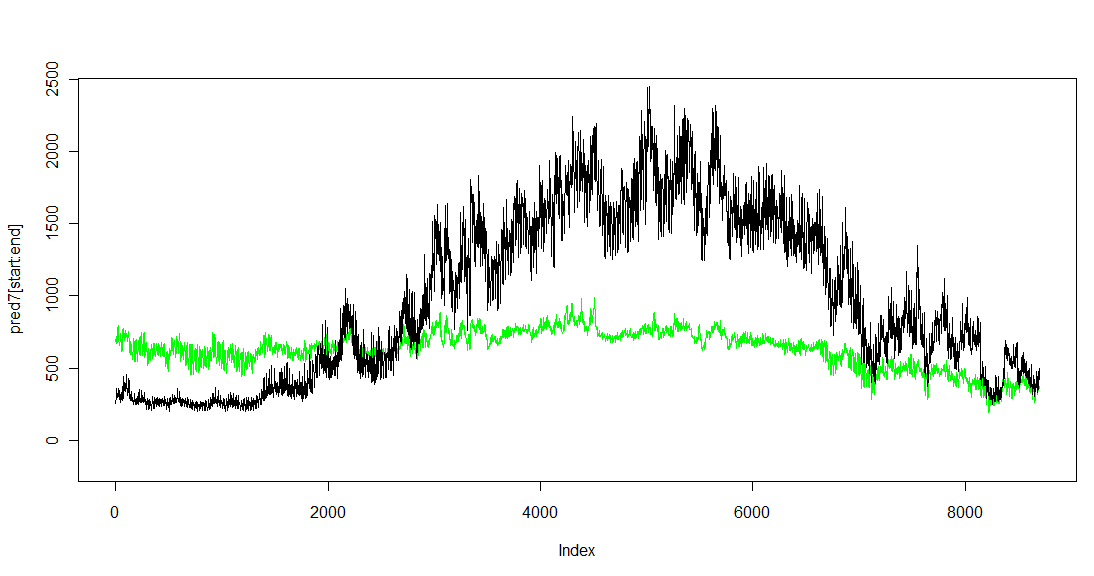 which is better, but not nearly what I expected to see.

You're going to have a little bit of trouble modeling a series with 2 levels of seasonality using an ARIMA model. Getting this right is going highly dependent on setting things up correctly. Have you considered a simple linear model yet? They're a lot faster and easier to fit than ARIMA models, and if you use dummy variables for your different seasonality levels they are often quite accurate.

Here is an example of how I would approach this:

I've been using R to do load forecasting for a while and I can suggest you to use forecast package and its invaluable functions (like auto.arima).

You can build an ARIMA model with the following command:

with y your predictand (I suppose dayy), order the order of your model (considering seasonality) and exogenous_data your temperature, solar radiation, etc. The function auto.arima helps you to find the optimal model order. You can find a brief tutorial about `forecast' package here.

I personally don't understand transfer functions, but I think you got the xtransf and xreg reversed. At least in R's base arima it is xreg that contains your exogenous variables. It's my impression that a transfer function describes how (lagged data affects future values) rather than what.

I'd try using xreg for your exogenous variables, perhaps using arima if arimax demands a transfer function. The problem is that your model is daily, but your data has both daily and yearly seasonality, and I'm not sure right now if a first difference (the order=(*, 1, *)) will take care of that or not. (You certainly won't get magical year-round forecasts out of a model that only considers daily seasonality.)

P.S. What is the time that you use in your lm? Literal clock time or a 1-up observation number? I think you could get something by using a mixed-effect model (lmer in the lme4 package), though I haven't figured out whether doing that correctly accounts for the autocorrelation that will occur in a time series. If not accounted for, which anlm does not, you might get an interesting fit, but your concept of how precise your prediction is will be way too optimistic.

Not the answer you're looking for? Browse other questions tagged time-series modeling arima or ask your own question.

23
How to setup xreg argument in auto.arima() in R?
4
What is the purpose of and how to use the xreg argument when fitting ARIMA model in R?
2
Fitting a multivariate ARIMA model with R
3
ARIMA double seasonality with dummy in R error xreg
3
ARIMA - SARIMAX modelling with R
3
How do I model the variation over time?
0
Multivariate Box-Jenkins in Python
1
ARIMAX model in R
0
Statistical method for analysing time series with correlated datasets

2
How can I produce a de-seasonalized time series in R?
1
Adjusting energy consumption per day for average temperature
2
How to test whether covariates are significant with "xreg=" and "auto.arima()" (Error message)
1
How to decide on parameters for transfer function in intervention analysis using ARIMA?