What exactly is a hypothesis space in machine learning?

Whilst I understand the term conceptually, I'm struggling to understand it operationally. Could anyone help me out by providing an example?

Lets say you have an unknown target function $f:X \rightarrow Y$ that you are trying to capture by learning. In order to capture the target function you have to come up with some hypotheses $h_1,...,h_n$ where $h \in H$. Here, $H$ is your hypothesis space or set.

Suppose an example with four binary features and one binary output variable. Below is a set of observations:

This set of observations can be used by a machine learning (ML) algorithm to learn a function f that is able to predict a value y for any input from the input space.

We are searching for the ground truth f(x) = y that explains the relation between x and y for all possible inputs in the correct way.

The function f has to be chosen from the hypothesis space.

To get a better idea: The input space is in the above given example $2^4$, its the number of possible inputs. The hypothesis space is $2^{2^4}=65536$ because for each set of features of the input space two outcomes (0 and 1) are possible.

The ML algorithm helps us to find one function, sometimes also referred as hypothesis, from the relatively large hypothesis space.

Here is an example I borrowed and modified from the related part in the classical machine learning textbook: Pattern Recognition And Machine Learning to fit this question:

We are selecting a hypothesis function for an unknown function hidding in the training data given by a third person named CoolGuy living in an extragalactic planet. Let's say CoolGuy knows what the function is, because the data cases are provided by him and he just generated the data using the function. Let's call it(we only have the limited data and CoolGuy has both the unlimited data and the function generating them) the ground truth function and denote it by $y(x, w)$. 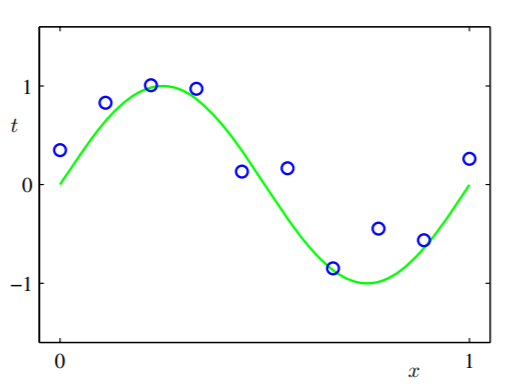 The green curve is the $y(x,w)$, and the little blue circles are the cases we have(they are not actually the true data cases transmitted by CoolGuy because of the it would be contaminated by some transmission noise, for example by macula or other things).

We thought that that hidden function would be very simple then we make an attempt at a linear model(make a hypothesis with a very limited space): $g_1(x, w)=w_0 + w_1 x$ with only two parameters: $w_0$ and $w_1$, and we train the model use our data and we obtain this: 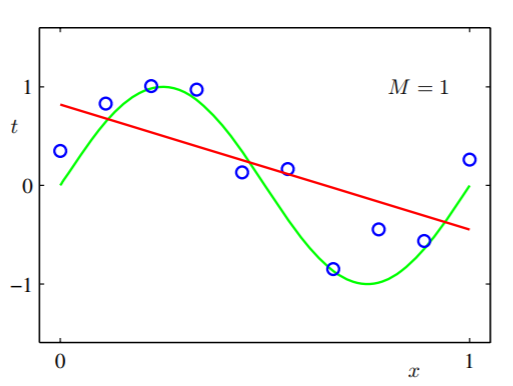 We can see that no matter how many data we use to fit the hypothesis it just doesn't work because it is not expressive enough. 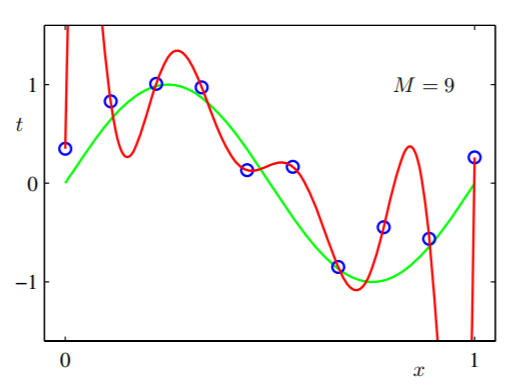 We can see that it is just too expressive and fits all data cases. We see that a much larger hypothesis space(since $g_2$ can be expressed by $g_9$ by setting $w_2, w_3, \cdots, w_9$ as all 0) is more powerful than a simple hypothesis. But the generalization is also bad. That is, if we recieve more data from CoolGuy and to do reference, the trained model most likely fails in those unseen cases.

Then how large the hypothesis space is large enough for the training dataset? We can find an aswer from the textbook aforementioned:

One rough heuristic that is sometimes advocated is that the number of data points should be no less than some multiple (say 5 or 10) of the number of adaptive parameters in the model.

Not the answer you're looking for? Browse other questions tagged machine-learning terminology definition or ask your own question.

3
What is Hypothesis set in Machine Learning?
2
How to estimate the bias/variance percentages?
1
in a binary features and one binary output case, is the size of a hypothesis space = $2^{\text{the size of input space}}$?