What algorithm could be used to predict consumables usage given data from past purchases?

Thinking about a supposedly simple but interesting problem, I'd like to write some code to forecast consumable I'll need in the near future given the full history of my previous purchases. I'm sure this kind of problem has some more generic and well studied definition (someone suggested this is related to some concepts in ERP systems and the like).

The data I have is the full history of previous purchases. Let's say I'm looking at paper supplies, my data looks like (date, sheets):

I have no data on the actual stock levels every time. I'd like to use this simple and limited data to predict how much paper I'll need in (for example) 3,6,12 months.

So far I came to know that what I'm looking for is called Extrapolation and not much more :)

What algorithm could be used in such a situation?

And what algorithm, if different from the previous one, could also take advantage of some more data points giving the current supply levels (e.g., if I know that on date X I had Y sheets of paper left)?

Please feel free to edit the question, title and tags if you know a better terminology for this.

EDIT: for what it's worth, I will be trying to code this in python. I know there are lots of libraries that implement more or less any algorithm out there. In this question I'd like to explore the concepts and the techniques that could be used, with the actual implementation to be left as an exercise to the reader.

Several models are possible. Given the move to a paperless office (which has been ongoing for about 25 years :-), we might adopt an exponential (decrease) model. The result is portrayed by the following scatterplot of the consumption, on which are drawn the exponential curve (fitted via ordinary least squares to the logarithms of the consumption) and its 95% prediction limits. Extrapolated values would be expected to lie near the line and between the prediction limits with 95% confidence. 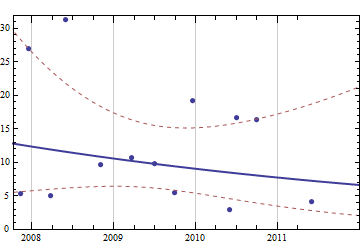 The vertical axis shows pages per day on a linear scale. The dark blue solid line is the fit: it is truly exponential but comes remarkably close to being linear. The effect of the exponential fit appears in the prediction bands, which on this linear scale are asymmetrically placed around the fit; on a log scale, they would be symmetric.

A more precise model would account for the fact that consumption information is more uncertain over shorter periods of time (or when total purchases are smaller), which could be fitted using weighted least squares. Given the variability in these data and the rough equality of the size of all purchases, it's not worth the extra effort.

What weights to use? We might consider the paper consumption, which necessarily accrues in integral amounts of paper, as a count which varies independently from day to day. Over short periods, the variance of the count would therefore be proportional to the length of the period. The variance of the count per day would then be inversely proportional to the length of the period. Consequently the weights should be directly proportional proportional to the periods elapsed between inventories. Thus, for example, the consumption of 1000 sheets between 2007-05-10 and 2007-11-11 (about 180 days) would have almost five times the weight of the 1000 sheet consumption between 2007-11-11 and 2007-12-18, a period of only 37 days.

The same weighting can be accommodated in the prediction intervals. This would result in relatively wide intervals for predictions of consumption during one day compared to prediction for consumption over, say, three months.

Please note that these suggestions focus on simple models and simple predictions, appropriate for the intended application and the obvious large variability in the data. If the projections involved, say, defense spending for a large country, we would want to accommodate many more explanatory variables, account for temporal correlation, and provide much more detailed information in the model.

In theory, it is also possible that not only time intervals between purchases, but also moments in time themselves influence on the amounts. For example, for some reason in January people may want more paper than, say, in April. In this case you cannot use number of month as independent variable itself due to the nature of linear regression itself (number of the month is just a label, but will be used as amount). So you have 2 ways how to overcome this.

First, you can add 12 additional variables, one for each month, and set each variable to 1 if it represents month of purchase and to 0 if it doesn't. Then use same linear regression.

Second, you can use use more sophisticated algorithm, such as M5', which is mix of linear regression and decision trees (you can find detailed description of this algorithm in Data Mining: Practical Machine Learning Tools and Techniques).

Here is an idea about how to forecast the purchases: consider the data as an intermittent demand series. That is, you do have a time series sampled at regular intervals, but the positive values are obviously irregularly spaced. Rob Hyndman has a nice paper on using Croston's method for forecasting intermittent demand series. While I also program a lot in Python, you'll save a lot of exploration time by using Croston's method, as well as other time series forecasting methods, readily available in Rob's excellent R package forecast.

I'm pretty sure you are trying to do some regression analysis to fit a line to your data points. There are plenty of tools out there to help you - MS Excel being the most accessable. If you want to roll your own solution, best to brush up on your statistics (here and here, perhaps). Once you fit a line to your data, you can extrapolate into the future.

EDIT: Here is a screenshot of the excel example I mentioned in the comments below. The bolded dates are random dates in the future that I typed in myself. The bold values in column B are extrapolated values calculated by Excel's flavor of exponential regression. 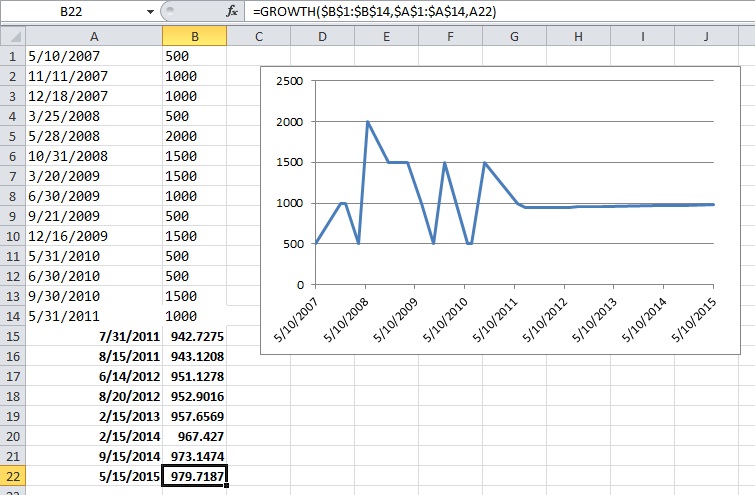 EDIT2: OK, so to answer the question of, "What techniques can I use?"

Please see this page for a little intro on each: http://www.decisioncraft.com/dmdirect/forecastingtechnique.htm

it's not 'sampled' at regular intervals, so I think it doesn't qualify as a Time Series data

This is an erroneous conclusion - it's certainly time series. A time series may be irregularly sampled, it just tends to require different from the usual approaches when it is.

This problem appears to be related to stochastic problems like dam levels (water is generally used at a fairly stable rate over time, sometimes increasing or decreasing more or less quickly, while at other times its fairly stable), while dam levels tend to only increase rapidly (essentially in jumps), as rainfall occurs. The paper usage and replenishment patterns may be somewhat similar (though the amount ordered may tend to be much more stable and in much rounder numbers than rainfall amounts, and to occur whenever the level gets low).

It's also related to insurance company capital (but kind of reversed) - aside initial capital, money from premiums (net operating costs) and investments comes in fairly steadily (sometimes more or less), while insurance policy payments tend to be made in relatively large amounts.

Both of those things have been modelled, and may provide a little insight for this problem.

you should have a look at WEKA. It is a tool and a Java API with a suite of machine learning algorithms. In particular you should look for classification algorithms.

I would use linear least squares to fit a model to the cumulative consumption (i.e. running total of pages by date). An initial assumption would be to use a first degree polynomial. However the residuals indicate that the first degree is underfitting the data in the example, so the next logical step would be to increase it to a second degree (i.e. quadratic) fit. This removes the curvature in the residuals, and the slightly negative coefficient for the squared term means that the consumption rate is decreasing over time, which seems intuitive given that most people probably tend to use less paper over time. For this data I don't think you need to go beyond a second degree fit, as you may start overfitting and the resulting extrapolation may not make sense.

You can see the fits (including extrapolation) and the residuals in the plots below. 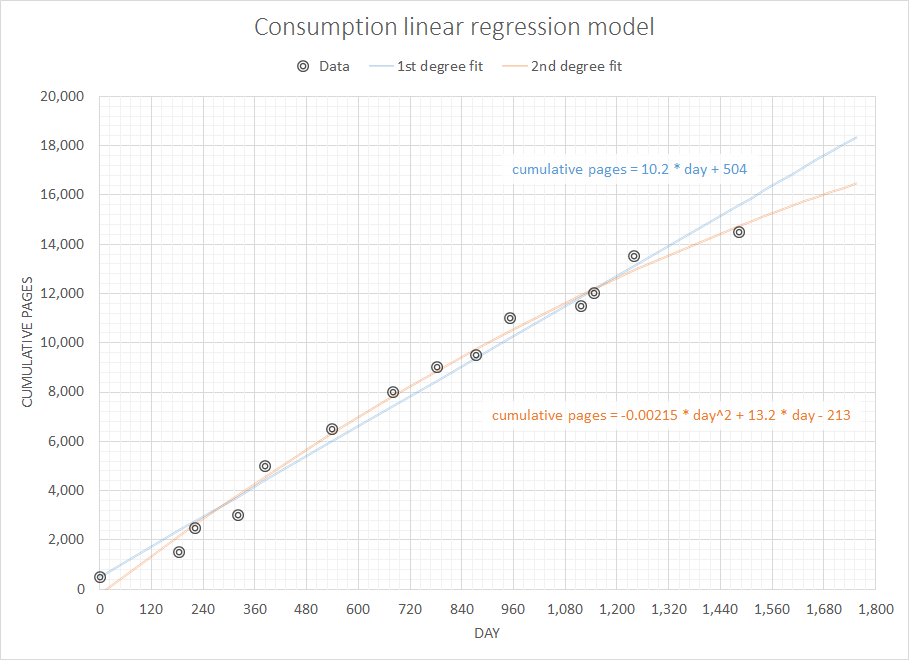 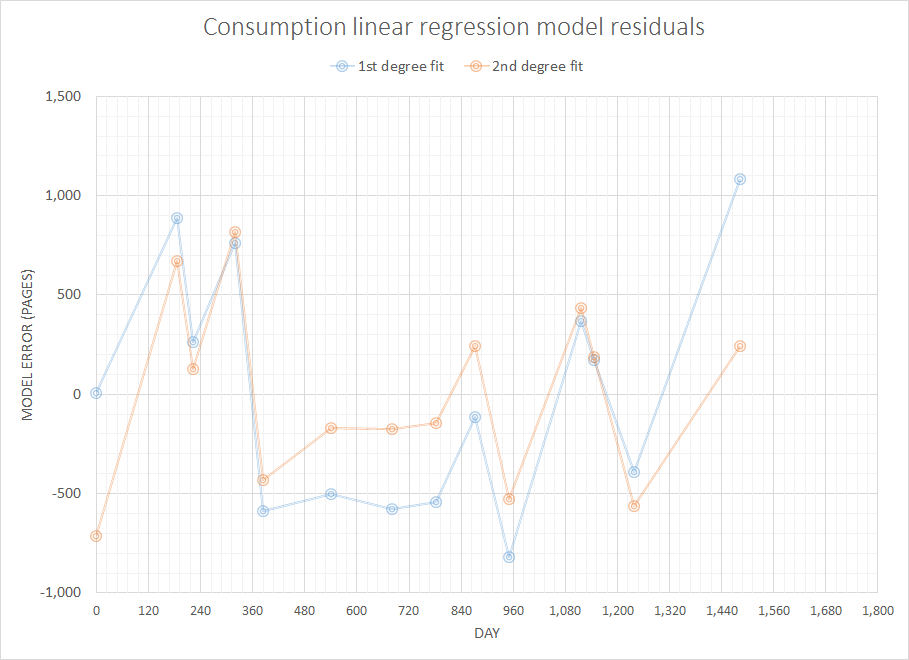 If you can, it might be good to perform bootstrapping to get a better estimate of the prediction errors.

I think you can get your data using operations research.

Why don't you try to find some equations that takes as variables the amount of paper used per time period, users of the paper, etc?

Not the answer you're looking for? Browse other questions tagged time-series machine-learning forecasting or ask your own question.

10
Combining two time-series by averaging the data points
1
How can I perform weibull analysis on monthly recorded data of wind speeds?
2
How to compare yearly categorical data?
6
Pandas Time Series DataFrame Missing Values
0
How do you model the average value of a customer subscription based on historical data that is ongoing up till the present?
0
Classification of users by purchase history
0
Predict ride destination based on historical data
1
How to plot sparse timeseries data (preferably using Google Sheets)?
1
Demand forecasting: what is the proper validation strategy to objectively compare a new algorithm with the one already used in the system?