I have three datasets, let's call them X and Y1 and Y2. A scatterplot is produced out of them, with Y1 and Y2 sharing them same X dataset.

My question: if the two regression lines are different in both slope and intercept, is there a way to evaluate if the X dataset has more influence on Y1 or Y2?

Based on the image below, this is to say - which Y dataset is more influenced by the X dataset?
Is there any metrics for measuring this? 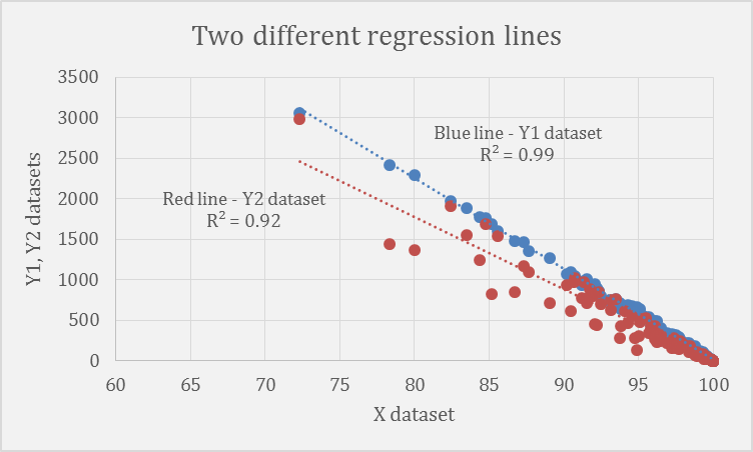 If by "influence" you mean the magnitude of output change for a unit change in the input, then slope is your measure.

R^2 gives you a measure of "explained variance" (as Ivo already noted), that is - how well your model describes the output variations against input variations.

So, to answer your specific question:

"which Y dataset is more influenced by the X dataset?"

Y1, because it has a higher average difference in output magnitude for the same levels of change in input magnitude.

Y1 accidentally has also a higher R^2 value, but even if it was lower than for Y2, with the same slope, the answer would be the same.

This plot gives you two things: First, X is more strongly correlated with Y1 than with Y2, since R2 is higher for Y1. R2 is a quantification of the explained variance. Second, the slope of Y1 is more steep than Y2 meaning that it changes more as X changes. Does that answer your question?

Not the answer you're looking for? Browse other questions tagged regression predictive-models or ask your own question.