Is this Simpson's Paradox on the Titanic data set?

With the well known "Survival of passengers on the Titanic" data set I get a strange behaviour by plotting the fare vs. the age (see below). Without a constraint on Pclass the correlation is positive. In contrast for all Pclasses the correlations seems to be negative.

I assume that's a form of "Simpson's Paradox". But I am not sure. How can this behaviour best explained for this special case? 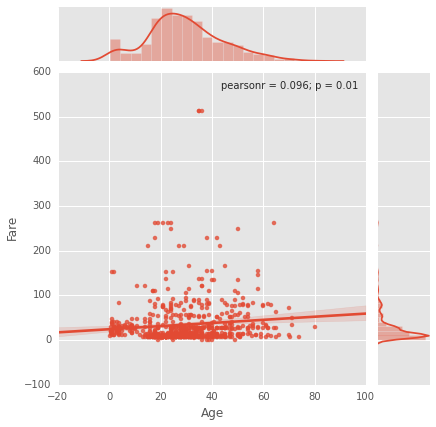 Although Simpson's paradox (or Simpson's reversal) is more often referred in 3-way contingency tables than in correlation between continuous variables, it's the same phenomenon.

About the fact that people is younger in the lower classes, you can see in the plot that there are a lot of children (age<18) in 3rd class, less of them in 2nd class (clearly less people in 0-20 than in 20-40), and very few children in 1st class. Comparing the 40-60 and 60-80 bands with the 20-40 band would also show that people tend to be younger in lower classes.

And just a as a side comment: this one is not the only occurrence of Simpson's paradox in the Titanic dataset. In https://select-statistics.co.uk/blog/hidden-data-and-surviving-a-sinking-ship-simpsons-paradox/ or https://www2.stat.duke.edu/courses/Fall12/sta611/SimpsonsParadox.pdf another one is noticed.

7
Why is my regression insignificant when I merge data that produced two significant regressions?
1
question about multiple regression with categorical predictors