I have a series with double seasonality, one daily and one weekly. I modelled the daily seasonality with SARIMA, and I want to include weekly dummy variables.

I only included weekday variables for the times when spikes occur in my data, and dropped the rest. That's how a long term forecast looks with this model:

Regardless of the exact SARIMA specification, there is always no trend without dummies, and always a trend when i include "variablewochentag" (German for weekday variable). There are 2 spikes per day in my data, and my data is Mo-Fr, so i have 10 weekday variables. There is also a seasonal difference (65 = daily seasonality) in my estimation, and i have no constant. I have 2080 observations which i used for estimation, added weekday dummies for future observations and then have run the forecast which results in the above picture. 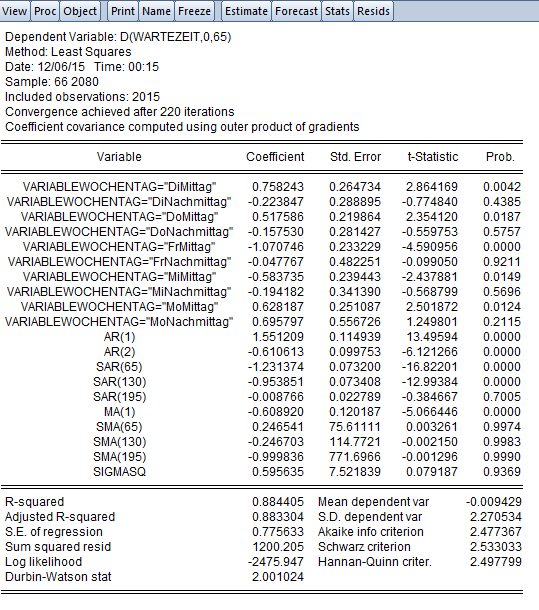 http://www.filedropper.com/data_10 Here is my data. Note: the first 2080 data points are my actual observations, the rest are just zeros + the relevant variables to do the long term forecast. Seasonality is 65 for daily, 325 for weekly.

Your model is way over-specified (kitchen-sink modelling) probably because of your reliance on a simple statistic like AIC/BIC which premises no outliers/level shifts/time trends/constant parameters/constant error variance and many other things. If you have redundant/cancelling parameters like AR(65) and MA(65) as you do all bets are off with the normal expectation of stable (i.e.non-trending) forecasts. Furthermore if your coefficients are non-invertible or nearly non-invertible like your AR(1) and AR(2) this can lead to "explosive forecasts" . Consider an AR(2) model with coefficients .6 and .5 ....which is non-invertible because the coefficients sum to more than 1.0 , you get explosive forecasts . KISS is the order of the day. Model identification is important.

Not the answer you're looking for? Browse other questions tagged time-series forecasting arima seasonality or ask your own question.