The question is about stimulating different type of species (coded 1-10) based on given species frequencies, and other parameters (eg. mean of normally distributed mass and ratio) using gibbs sampling. I have done all the work above and get a trace plot(shown below), and I want to know after burn in period, how dependent the subsequent points from the Markov chain are. Someone told me to use pacf and acf from time series class but I never learned that before. Could some one explain that or is there any other way to show the dependency? 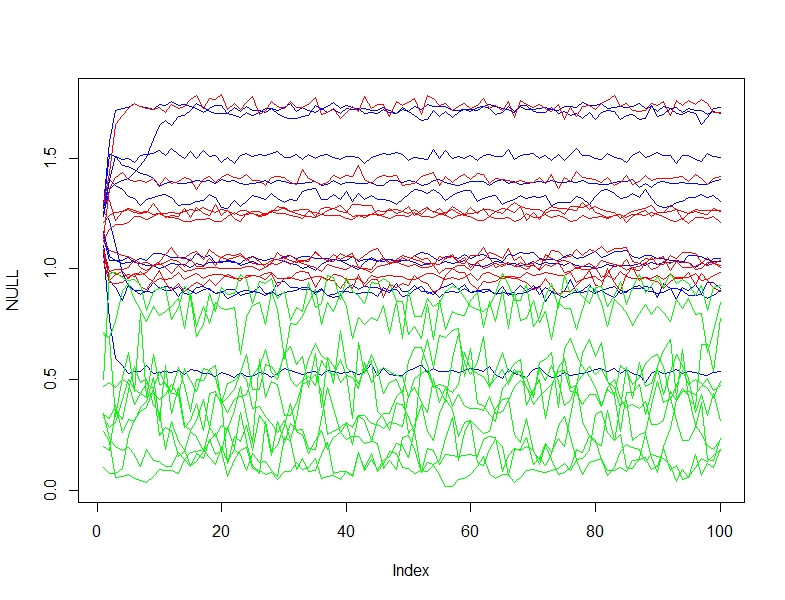 What you are looking for is autocorrelation (R acf function computes it). If $X_t$ is a random variable, a time-series with $t = 1,...,T$ cases, $\mu$ is its mean, then we can define its autocovariance for lag $\tau$ as

for $\tau = 0$ this reduces to regular variance

it can be computed as:

With autocorrelation we compute the correlation between each $t$ value and $t+\tau$ value of $X$. It lies in $[-1, 1]$ range, as standard correlation. Autocorrelation is a commonly used summary statistics in time-series analysis (e.g. here). In your case, if you are interested in dependence on previous observation only, you need to compute it only for lag $\tau = 1$, but in many other cases you would probably look also for other lags since the dependence structure could be more complicated.

If you want to visualize it to yourself, let me use a simple random walk example: 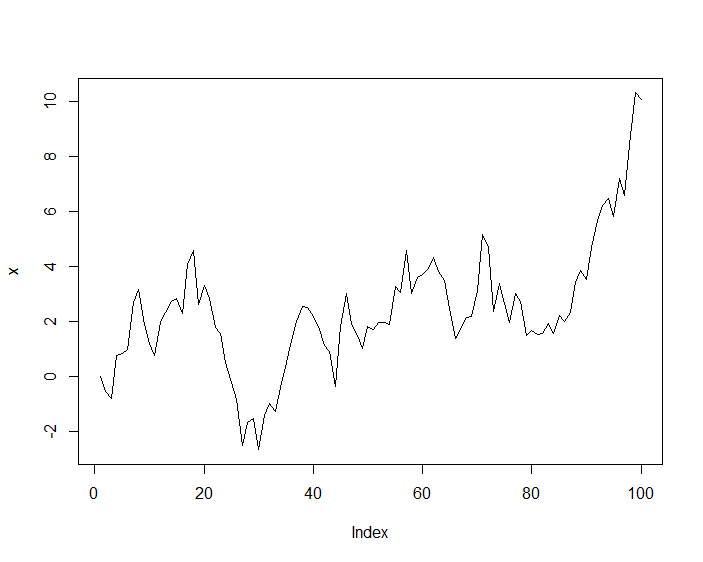 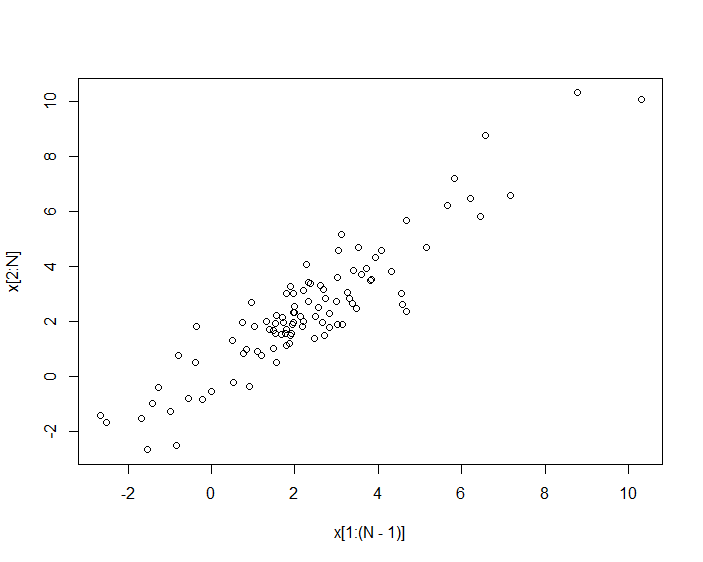 as you can see, values of autocorrelation are not exactly the same like with simple correlation, because they are calculated differently but the general idea is the same like with regular correlation. For general introduction you can check some time-series handbooks, for example Chatfield (2003) or Hyndman and Athana­sopou­los (2013, available online).

Chatfield, C. (2003). The Analysis of Time Series: An Introduction. Chapman and Hall/CRC.

Not the answer you're looking for? Browse other questions tagged r time-series autocorrelation markov-chain-montecarlo markov-process or ask your own question.

20
Why isn't variance defined as the difference between every value following each other?
14
Formula for autocorrelation in R vs. Excel
10
Interpreting seasonality with ACF and PACF
2
Predicting future values with a regression model
2
How to calculate $\phi$ (phi) - a first order autocorrelation coefficient
2
Modelling a time-series with lags
1
Machine learning for regression of a function that is dependent on its own previous state?

5
How do you use draws from a Markov chain (Monte Carlo) for (bayesian) inference?
6
Variance stabilization “rule” for MCMC jumps…anyone?
11
Markov chain Monte Carlo (MCMC) for Maximum Likelihood Estimation (MLE)
3
Optimal decision process to estimate Markov chain limiting distribution
8
When approximating a posterior using MCMC, why don't we save the posterior probabilities but use the parameter value frequencies afterwards?
1
Limiting distribution of Markov chain; two approximations
3
Homework Help on Simple Markov Chain
2
What should be the burn in period for Metropolis-within-Gibbs?