How to read the Interaction effect in multiple linear regression with continuous regressors?

If the interaction happens between a continuous and a discrete variable it is (if I'm not mistaken) relatively straightforward. The mathematical expression is:

So if we take my favorite dataset mtcars{datasets} in R, and we carry out the following regression:

But when it is two continuous variables that are interacting, are we really creating an infinite number of slopes? How do express the output without corny sentences like "the slope we would get with cars that weight $0\,\text{lbs.}$, or $1\,\text{lb.}$? For example, take the explanatory variables wt (weight) and hp (horsepower) and the regressand mpg (miles per gallon):

[Quick note, safe to skip: I really appreciate the answers and help provided, and will accept - it is rather difficult with such outstanding Answers, though. So please don't take this edit as anything more than a way of sharing what I've been doing for a little while this morning: basically hacking away at the R coefficients until I got what I wanted because despite the generous help provided I still couldn't "see" how one of the coeff's worked. Also, all this pre-emption will be erased shortly.]

We can "prove" how these coefficients "work" by simply taking the first values of mpg, wt and hp, which happen to be for the glamorous Mazda RX4: 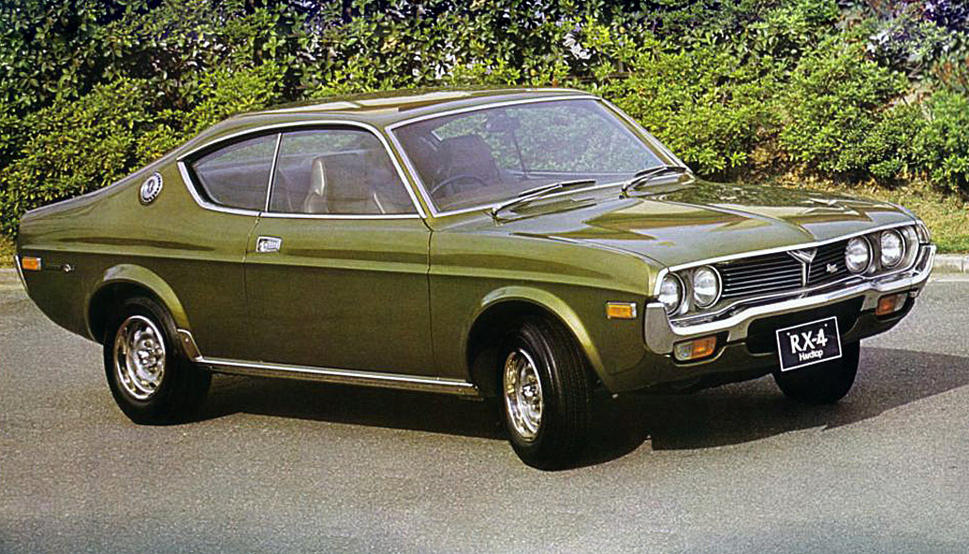 And simply run predict(fit)[1] Mazda RX4, which returns a $\hat y$ value of $23.09547$. No matter what, I have to rearrange the coefficient to get this number - all possible permutations if necessary! No just kidding. Here it is:

The math expression is:

So, as pointed out in the answers, there is only one intercept (the first coefficient), but there are two "private" slopes: one for each explanatory variable, plus one "shared" slope. This shared slope allows obtaining uncountably infinite slopes if we "zip" through $\mathbb{R}$ for all the theoretically possible realizations of one of the variables, and at any point we combine ($+$) the "shared" coefficient times the remaining random variable (e.g. for hp = 100, it would be 0.02785 * 100 * wt) with its "private" slope (-8.21662 * wt). I wonder if I can call it a convolution...

We can also see that this is the right interpretation running:

Having rediscovered the wheel we see that the "shared" coefficient is positive (0.02785), leaving one loose end, now, which is the explanation as to why the weight of the vehicle as a predictor for "gas-guzzliness" is buffered for higher horse-powered cars... We can see this effect (thank you @Glen_b for the tip) with the $3\,D$ plot of the predicted values in this regression model, which conforms to the following parabolic hyperboloid: 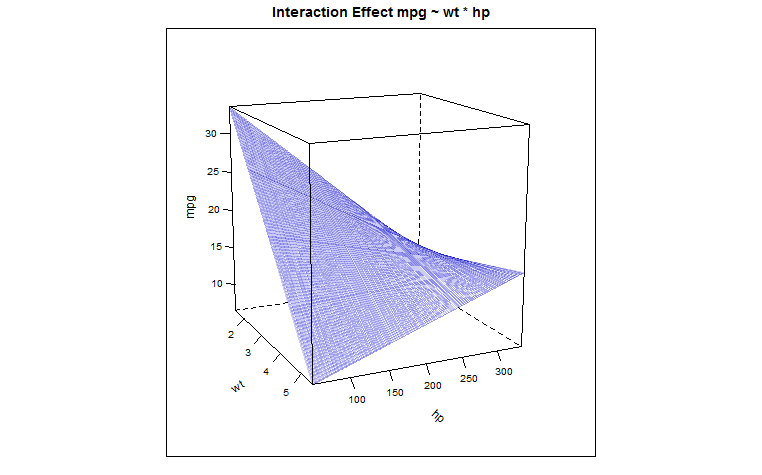 There seems to be one single intercept 49.80842, whereas it would make sense to have two different intercepts

No, it usually wouldn't make sense to have two intercepts; that only makes sense when you have a factor with two levels (and even then only if you regard the relationship holding factor levels constant).

In that sense - whether we have factor variables or numerical variables - there's only one intercept for the whole equation.

Unless, that is, you're considering different parts of the model as separate equations.

Imagine that we had one factor with three levels, and one continuous variable - for now without the interaction: 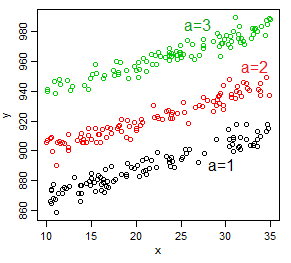 But now let's consider the relationship with $a$. Now for each level of $a$, if $x$ had no impact, there'd be a very simple relationship $E(Y|a=j)=\mu_j$. There's one intercept, the baseline mean (or if you conceive it that way, three, one for each subgroup -- where the intercept would be the average value in that subgroup). 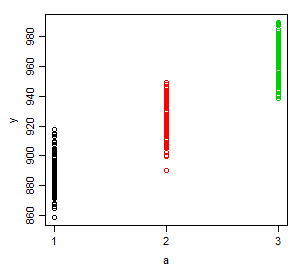 (nb It may be hard to see here but the means are not equally spaced; don't be tempted by this plot to think of $y$ as linear in $a$ considered as a numeric variable.) 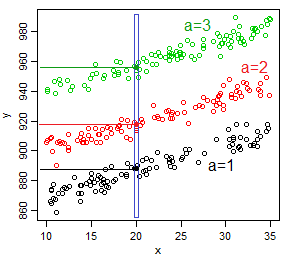 So that would be one intercept (the black dot if it's the baseline group) ... at each value of $x$.

For each of infinite number of different values that $x$ might take, there's a new intercept.

So depending on how we look at it, there's one intercept, or three, or an infinite number... but not two.

Now if we introduce an $x:a$ interaction, nothing changes but the slopes! We still can conceive of this as having one intercept, or perhaps three, or perhaps an infinite number.

So how does this all relate to two numeric variables?

Even though we didn't have it in this case, imagine that the levels of $a$ were numeric and that the fitted model was linear in $a$ (perhaps $a$ is discrete, like the number of phones owned collectively by a household). [i.e. we're now doing what I said earlier not to do, taking $a$ to be numeric and (conditionally) linearly related to $y$]

So how do we interpret the interaction term when both variables are numeric?

Now if we replace this now numeric but discrete $a$ with a continuous variate, you'd have an infinite number of slopes for both one-on-one relationships, one at each value of the third variable.

You effectively say as much in your question of course.

are we constrained to expressing this with absurd scenarios, such as if we had cars with 1hp we would have a modified slope for the weight equal to (−8.21662+0.02785)∗1∗weight? Or is there a more sensible way to look at this term?

Sure there is, consider values more like the mean. So for a typical relationship between mpg and wt, hold horsepower at some value near the mean. To see how much the slope changes, consider two values of horsepower, one below the mean and one above it.

Where the variable-values aren't especially meaningful in themselves (like score on some Likert-scale-based instrument say) you might go up or down by a standard deviation on the third variable, or pick the lower and upper quartile.

Where they are meaningful (like hp) you can pick two more or less typical values (100 and 200 seem like sensible choices for hp for the mtcars data, and if you also want to look at something near the mean, 150 will serve quite well, but you might choose a typical value for a particular kind of car for each choice instead)

Nope. Some calculus should confirm that the derivative of mpg with respect to wt, which is the only kind of slope you should be interested in, is

That whole expression is the expected increase in mpg from increasing wt by one. Similarly the derivative of mpg with respect to hp is

because interactions are symmetric.

I'm not sure what you mean here. If you're worried about talking about cars with zero hp or wt or whatnot, then it's probably just easier to redefine those variables to have a zero that's more meaningful.

For example, subtract the Mazda RX4 from each row. Now you have a rotary-engined early seventies zero point to compare to. That is, you are no longer considering cars with an hp of one, but rather cars an hp one higher than that of a Mazda RX4.

The easiest way is to have a look at different quantiles of one of your variables of interest, depending on your research question. Assuming that you want to know the effect of one additional unit of horse power on the miles per gallon a car uses, you look at the distribution of the weight and use e.g. the percentiles 1, 10, 25, 50, 75, 90 and 99. For each of these percentiles you compute the effect of hp on mpg.

Concerning interaction terms and parent variables (variables which are interacted) Chipman put forward the Heredity principle (http://arxiv.org/abs/bayes-an/9510001). Basically he differentiates between strong and weak heredity, depending on how much parent variables are included in the regression. From a statistical point of view it would also be correct to just add the interaction term, without the variables themselves. But this makes the results hard (/impossible) to interpret.

Not the answer you're looking for? Browse other questions tagged r regression interaction regression-coefficients or ask your own question.