I'm trying to wrap my head around the result of Bayes Theorem applied to the classic mammogram example, with the twist of the mammogram being perfect.

Probability of a positive mammogram, given the patient has cancer: $1$

Probability of a positive mammogram, given the patient does not have cancer: $.01$

So, if a random person from the population takes the mammogram, and obtains a positive result, there is a 50% chance they have cancer? I'm failing to intuitively understand how the tiny 1% chance of a false positive in 1% of the population can trigger a 50% result. Logically, I would think a perfectly true positive mammogram with a tiny false positive rate would be much more accurate.

I will answer this question both from a medical and a statistics standpoint. It has received a lot of attention in the lay press, particularly after the best-seller The Signal and the Noise by Nate Silver, as well as a number of articles in publications such as The New York Times explaining the concept. So I'm very glad that @user2666425 opened this topic on CV.

First off, let me please clarify that the $p\,(+|C) = 1$ is not accurate. I can tell you that this figure would be a dream come true. Unfortunately there are a lot of false negative mammograms, particularly in women with dense breast tissue. The estimated figure can be $20\%$ or higher, depending on whether you lump all different types of breast cancers into one (invasive v DCIS), and other factors. This is the reason why other modalities based on sonographic or MRI technology are also applied. A difference between $0.8$ and $1$ is critical in a screening test.

Bayes theorem tells us that $\small p(C|+) = \large \frac{p(+|C)}{p(+)}\small* p(C)$, and has recently gotten a lot attention as it relates to mammography in younger, low risk women. I realize this is not exactly what you are asking, which I address in the final paragraphs, but it is the most debated topic. Here is a taste of the issues:

So, recalculating and very importantly, for younger women without risk factors:

The probability of having cancer when a screening mammogram has been read as positive can be as low as $15\%$ in young, low-risk women. As an aside, mammographic readings come with an indirect estimate of the confidence in the diagnosis the radiologist has (it is called BI-RADS), and this Bayesian analysis would change radically as we progress from a BI-RADS 3 to a BI-RADS 5 - all of them "positive" tests in the broadest sense.

This figure can logically be changed depending on what estimates you consider in your calculation, but the truth is that the recommendations for the starting age to enter a screening mammography program have recently been pushed up from age $40$ to $45$.

In older women the prevalence (and hence the pre-test probability) increases linearly with age. According to the current report, the risk that a woman will be diagnosed with breast cancer during the next 10 years, starting at the following ages, is as follows:

This results in a life-time cumulative risk of approximately $10\%$: 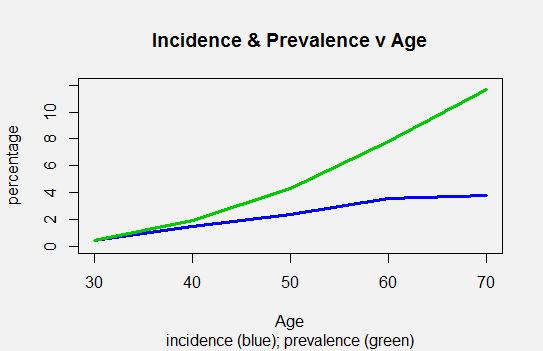 The calculation in older women with a prevalence of $4\%$ would be:

I can't overemphasize how many "scares" there are even in older populations. As a screening procedure a mammogram is simply the first step so it makes sense for the positive mammogram to be basically interpreted as there is a possibility that the patient has breast cancer, warranting further work-up with ultrasound, additional (diagnostic) mammographic testing, follow-up mammograms, MRI or biopsy. If the $p(C|+)$ was very high we wouldn't be dealing with a screening test it would be a diagnostic test, such as a biopsy.

Specific answer to your question:

It is the "scares", the $p(+|\bar C)$ of $7-10\%$, and not $1\%$ as in the OP, in combination with a relative low prevalence of disease (low pre-test probability or high $p(\bar C)$) especially in younger women, that accounts for this lower post-test probability across ages. Notice that this "false alarm rate" is multiplied by the much larger proportion of cases without cancer (compared with patients with cancer) in the denominator, not the "the tiny 1% chance of a false positive in 1% of the population" you mention. I believe this is the answer to your question. To emphasize, although this would be unacceptable in a diagnostic test, it is still worthwhile in a screening procedure.

Intuition issue: @Juho Kokkala brought up the issue that the OP was asking about the intuition. I thought it was implied in the calculations and the closing paragraphs, but fair enough... This is how I would explain it to a friend... Let's pretend we are going hunting for meteor fragments with a metal detector in Winslow, Arizona. Right here:

... and the metal detector goes off. Well, if you said that chances are that it is from a coin a tourist dropped off, you'd probably be right. But you get the gist: if the place hadn't been so thoroughly screened, it would be much more likely that a beep from the detector on a place like this came from a fragment of meteor than if we were on the streets of NYC.

What we are doing with mammography is going to a healthy population, looking for a silent disease that if not caught early can be lethal. Fortunately, the prevalence (although very high compared with other less curable cancers) is low enough that the probability of randomly encountering cancer is low, even if the results are "positive", and especially in young women.

Since we never have a perfectly accurate measuring device or system, the fraction $\frac{\text{likelihood}}{\text{unconditional p(+)}}=\frac{p(+|C)}{p(+|C)\,*\,p(C)\, +\, p(+|\bar C)\,*\,p(\bar C)}$ will be $<1$, and the more imperfect it is, the lesser the fraction of the $p(C)$, or prior, that will be "passed on" to the LHS of the equation as the posterior. If we settle on a particular type of detector, the likelihood fraction will act as constant in a linear equation of the form, $\text{posterior} = \alpha * \text{prior}$, where the $\text{posterior} < \text{prior}$, and the smaller the prior, the linearly smaller will the posterior be. This is referred to as the dependence on prevalence of the positive predictive value (PPV): probability that subjects with a positive screening test truly have the disease.

A key problem with mammography that hasn't been adequately addressed in the discourse is the faulty definition of "positive". This is described in the Diagnosis chapter in http://biostat.mc.vanderbilt.edu/ClinStat - see the link for Biostatistics in Biomedical Research there.

One of the most widely used diagnostic coding systems in mammography is the BI-RADS score, and a score of 4 is a frequent "positive" result. The definition of category 4 is "Not characteristic of breast cancer, but reasonable probability of being malignant (3 to 94%); biopsy should be considered." With a risk range that goes all the way from 0.03 to 0.94 for one category, i.e., incredible heterogeneity in what "positive" really means, it is no wonder that we have a mess on our hands.

It is also a sign of unclear thinking that the BI-RADS system has no category for someone with an estimated risk of 0.945.

As Nate Silver so eloquently argues in The Signal and the Noise, if we were to think probabilistically we would make better decisions all around. Removing terms such as "positive" and "negative" for medical tests would remove false positives and false negatives and convey uncertainty (and justification for more tests before making a diagnosis) optimally.

Much of the book is about finding clearer ways of talking about, and thinking about, probability and risk. An example:

Perhaps this line of thinking is correct?:

So it is intuitively close to a coin flip for a random person. I'm not sure how to explain the additional $0.0025$ in favor of cancer given a positive mammogram.

Here's an oversimplified but intuitive way to look at it. Consider 100 people. One has cancer and will test positive. Of the 99 who don't, one of them will get a false positive test. So of the two positives, one will have cancer and one won't.

Not the answer you're looking for? Browse other questions tagged bayesian binning faq diagnosis or ask your own question.

-1
If someone has been diagnosed with a disease does he actually have the disease?
0
Bayes theorem for a rare disease
40
Combining probabilities/information from different sources
25
Is everyday probability just a way of dealing with the unknown (not talking quantum physics here)?
10
Conditional probabilities - are they unique to Bayesianism?
11
Is sensitivity or specificity a function of prevalence?
7
Posterior vs conditional probability
5
What's the difference between prior and marginal probabilities?
4
Why would considering $\theta$ to be a random variable not be 'Bayesian'?
4
In courts, should we assume that $\Pr(Y=y)$ is constant, for all $y \in \mathcal{Y}$?
See more linked questions