Just because people often ask what I've tried although I couldn't make it work: I let $A$ be the desired distribution and then considered that after a tiny interval of time $\delta$, $A$ decays to $e^{-\delta}A$; and it jumps to $A+1$ with probability $\delta$. I reasoned that the resulting mixture should equal $A$ since $A$ is the stationary distribution.

From there, without justification, I figured that the density of $A$, $f$ satisfies something like:

The answer may be surprising. Here is a brief sketch of a solution. As with a somewhat related problem, the idea is to obtain a recurrence relation for a quantity related to the asymptotic distribution and then solve that relation.

Since all uniform distributions are symmetric, the sum can equally well be expressed by changing each $s$ into $t-s$, producing an expression with the same distribution as $Y_t$,

where the $U_i$ are independently uniformly distributed on $[0,1]$. Therefore, if the random variable $X$ has the limiting distribution of $Y_t$, then $U(1+X)$ must also have this distribution for an independent uniform variate $U$. This is the desired recurrence relation. It remains to exploit it.

Let $X$ be a random variable with the limiting distribution function $F$ (of density $f$) and let $y \ge 0$. By definition,

This breaks into two parts depending on whether $y/(1+X)$ exceeds $1$, for when it is less than $1$ this probability equals $y/(1+X)$ and otherwise it equals $1$. We need to integrate this probability over all possible values of $X$, which can range from $0$ on up. This yields

For $0 \le y \le 1$, this shows $F$ is linear in $y$, whence $f$ is a constant in this interval. Let's rescale $F$ to make this constant unity--we'll renormalize afterwards. Thus, using the rescaled $F$, we obtain the recurrence relation

By differentiating both sides with respect to $y$ we obtain a comparable recurrence for the density. It can be simplified to

The solution breaks into functions defined piecewise on the intervals $[0,1]$, $[1,2]$, and so on. It can be obtained by starting with a constant value of $f$ on $[0,1]$, integrating the right hand side of the recurrence to obtain the values of $f$ on $[1,2]$, and repeating ad infinitum. The resulting function on $[0,\infty)$ is then integrated to find the normalizing constant. Only the first few expressions can be integrated exactly in any nice form--repeated logarithmic integrals show up immediately.

Here is a histogram of a simulation of the 100th partial product, iterated 10,000 times. Over it is plotted an approximation of $f$ obtained as described above using numerical integration. It closely agrees with the simulation. 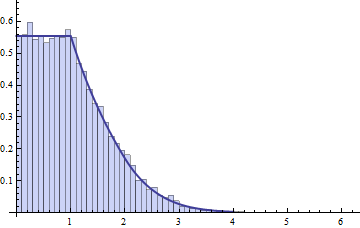 These calculations were carried out in Mathematica (due to the need for repeated numerical integration). A quick simulation of the problem--as originally formulated--can be performed in R as a check. This example performs 100,000 iterations, drawing a Poisson $N$, conditionally drawing the $X_t$, and computing $Y_t$ each time: