Confidence interval for population mean when sample is a series of counts?

I have count data for each of a sample of individuals (it's the number of times each independent individual performed a certain behaviour during a standardised observation of that individual). How can I calculate a confidence interval for the population mean? All over the internet there are Poisson methods for calculating the CI for a single count, but I can't find a method for a sample of separate counts. R code would be appreciated!

Edit: information about my data is useful. I have ten cells of data: Gender, by a five level ordinal variable, with small n in each cell. I am not certain the data is Poisson. I have done a possible dodgy Poisson regression which shows a significant effect of Var and an interaction with Gender. I would like to plot means with CIs to see if I believe the model.

Here'a a quick display of the data: 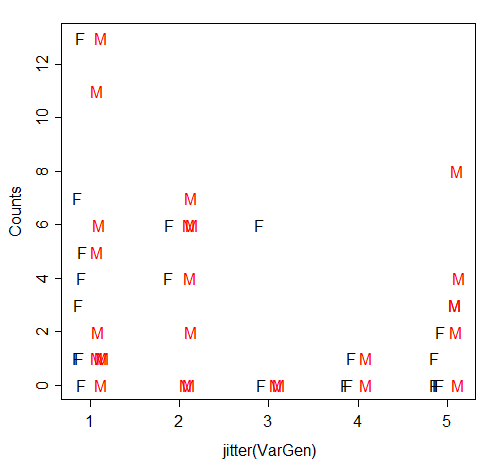 If you're prepared to assume that within each Gender/Var combination the counts are Poisson with the same mean, then this is reasonably straightforward.

The variance of a sum of independent Poissons is Poisson, so you can form a confidence interval for the expected sum within each Var/Gender category using methods you say you're already familiar with. Since the mean is the sum divided by a constant, you simply divide the endpoints of your confidence interval for the expected sum by that constant. Done!

However, there's a fairly clear suggestion of more variation within groups than the Poisson model would indicate ("overdispersion").

Some possibilities - you could look at fitting an overdispersed Poisson model, or you could look at a negative binomial model, and then in either case obtain a confidence interval for each subgroup mean from that.

For example, here's the fitted means $\pm 1$ standard error of the mean for a main effects overdispersed Poisson model with log link (done in R): 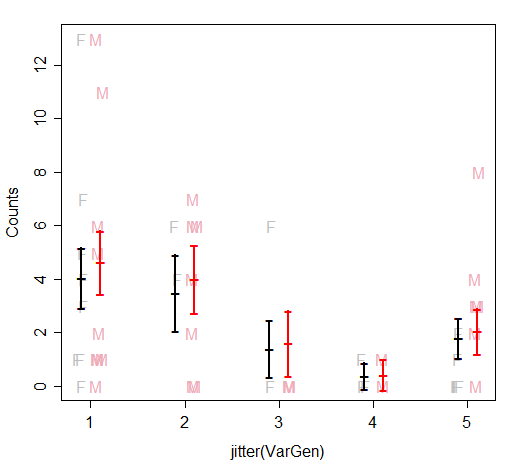 I'd expect similar results from a negative binomial model. (You would possibly prefer a model with an interaction term though the results would look fairly similar to these.)

These standard errors would be about 1.8 times as big as you'd get by assuming a straight Poisson model.

Not the answer you're looking for? Browse other questions tagged confidence-interval mean poisson-distribution count-data or ask your own question.

1
Count data from unequal time frames
3
Determining appropriate sample rate for count data
2
Expected Counts in Pearson's Goodness of Fit Test
1
Alternatives to Chi-Squared for Single Categorical Outcome and Single Categorical Predictor w/counts for factors [R]
1
How to compute a confidence interval for the mean of count data?
0
What test would be appropriate for a table containing data on number of visits for several individuals?
4
What is the distribution of a Poisson variable, where the Poisson rate is Normal (or Binomial)?