I am a beginner in statistics.(and probability theory too).I studied Exponential distribution and just started doing problems when I got stuck in the following one:

Suppose that $X_1, . . . , X_n$ form a random sample of size $n$ from the exponential distribution with parameter $\beta$. Determine the distribution of the sample mean of $X_n$.

Can someone tell me how to approach the problem? Its a easy one( my intuition says) but unfortunately I am not being able to write down things step by step.

The sample mean is

This doesn't contradict the answer given by @Jon Egil, only that his answer is an aproximation that depends on the sample size, and this one is the exact distribution.

Rephrased to better answer the original question, in line with the constructive comments.

The Central Limit Theorem (CLT), coined by George Pólya in 1920, is fundamental theorem for Probability Theory. Roughly, it states that the distribution of the sum (or average) of a large number of independent, identically distributed (iid) variables will approximate normal, regardless of the underlying distribution.

In relation to the point estimate of the mean, clearly, as more variables are sampled from the distribution, the sample mean is closer and closer to the underlying true mean. This is in accordance with the Weak Law of Large Numbers. Large is not defined clearly, but 30-50 is often cited as a reasonable number.

To build intuition, play with this R code and especially the sample size (50 below):

Please also see these two runs on my computer yielded the following results: 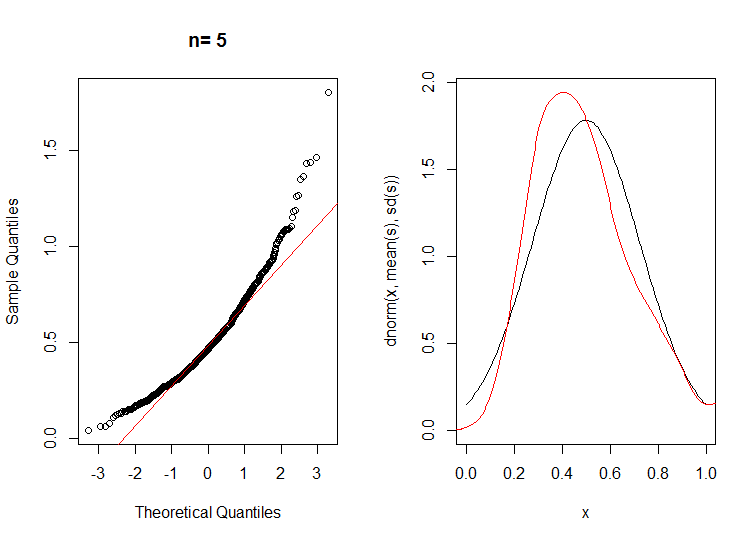 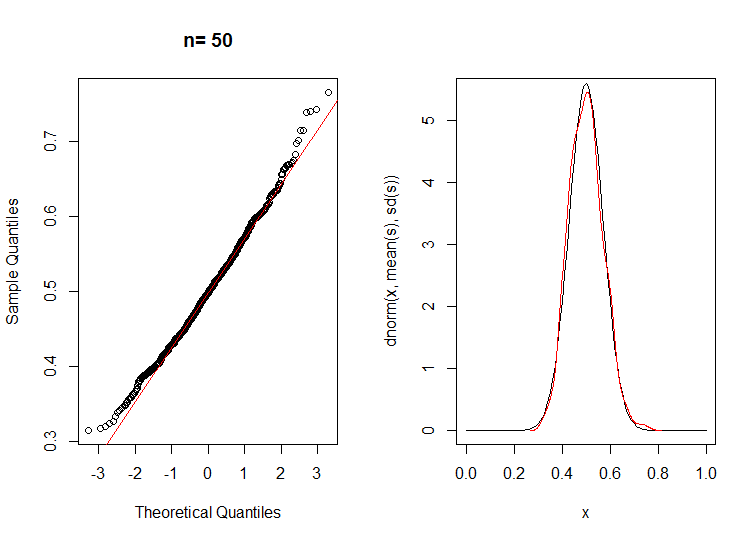 Visual inspection clearly shows the the bell curve of a normal distribution as n is large, while the small n has quite non-normal skew and tails.

Also note the Shapiro-Wilk normality test, available in R as:

Of these draws, only n=75 passed the Shapiro-Wilk normality test. Other seeds for the random generator will yield other results. But the general trend will remain, higher n means increasingly normal distribution of the sample mean.

Not the answer you're looking for? Browse other questions tagged probability self-study exponential-distribution or ask your own question.