Histogram/distribution fitting for this dataset with unequal and open-ended intervals?

I have this income distribution data for various groups: https://docs.google.com/spreadsheet/ccc?key=0Akwg3n_e05cCdEdtT0VZYU5keW5DVkNoNmpBWmdzeUE

As you can see, I have intervals/bins with varying widths. I also have an open-ended interval and the mean income in that open interval varies a lot between groups.

For pedagogical purposes, I'd like to be able to calculate how many people and/or percent is in a given interval, given an equal bin width.

1) Is this doable?
2) Do I need to fit a distribution to a histogram or how do I do it?
2b) What would you base this histogram / distribution on (mean, median etc.)? (As mentioned, the mean in the open-ended interval varies a lot between groups, something I'd like to take into consideration = show truthfully graphically.)
3) Can you please explain this in simple mathematical operations based on the data given?

There are lots of possible data sets that could generate these summary bins, so it's impossible to be exact, but you can make reasonable guesses.

One way to get subinterval estimates is to create a function that gives the number of people at each income level. The easiest, and perhaps the best (simplest assumptions), is to connect known points and interpolate between them. You don't really have known points, but I used the (x=median, y=intervalCount/intervalWidth). There's not much difference between the mean and medium in this set, which suggests the data values are pretty well-behaved in each interval.

Once you have such a function, you can integrate it between any two points to get any subinterval counts. 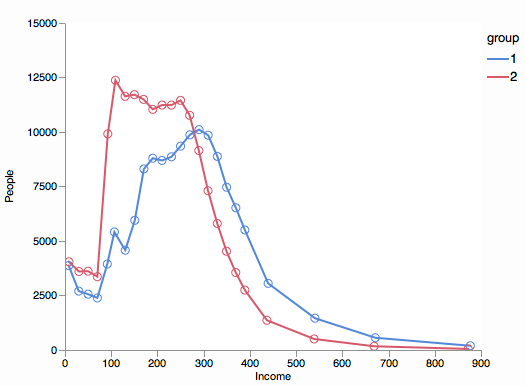 I left out the 0-0 interval because the value is literally off the chart and 1000+ because it has no real width.

Since the data is obviously not any traditional distribution, a local smoother is a decent way to smooth it out. Here's a spline smoother: 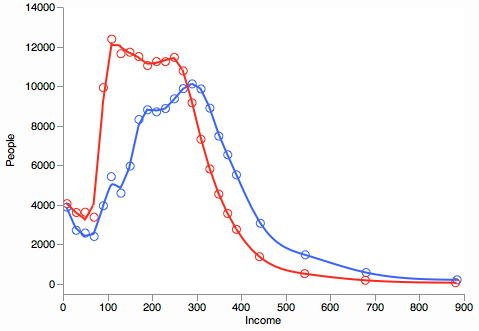 It does better at the tail, but is perhaps too smooth at the beginning.

The 100-119 interval looks high in both populations. It could be due to a propensity for people to round up to 100 when answering the survey.

As far are truth in graphics goes, it best to just plot the data that you have, which is the intervals. It might be useful to show the mean/medians, but they only depart from the middle for the high ranges, which might be worth separate study. 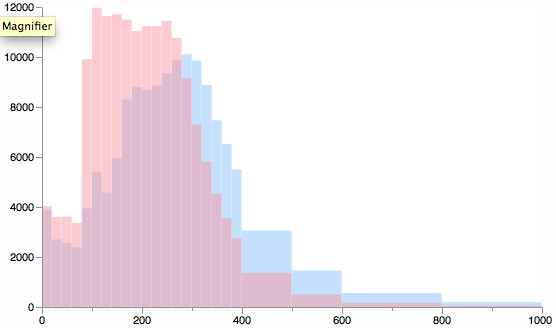 We can try in double our bin count by considering the medians. Theoretically, the median divides each interval into two intervals with equal population (two bars of equal area but possibly different heights). However, the breakdown is not so obvious due to possible ties and fractional medians. Here is it with interval widths of (median-lo) and (hi-median+1): (each full interval width is (hi-lo+1)). 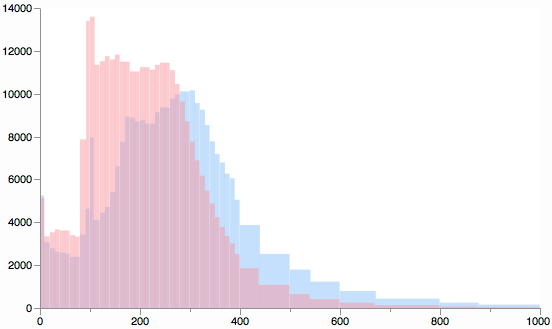 One fairly simple way to use just the counts of people in the intervals is to use logspline density estimation (the logspline package for R is one tool to do this, there may be others). There are routines (oldlogspline for the R package) that will fit these density estimates based on interval censored data (what you have), then just use that density information to compute the proportion in any interval that you are interested in.

You could expand on this to possibly take into account the mean/median information you have as well, but you will probably need to figure out your own how to fit that information, I don't know of any existing tools that would do that for you.

Not the answer you're looking for? Browse other questions tagged distributions data-visualization histogram density-function or ask your own question.

2
Which distribution to parametrize price histogram with exponential tail?
6
Approaches for comparing visual representation of two distributions with unequal sample sizes
1
Plotting a Gaussian distribution with an histogram. Got problems with the math
2
Choosing center of histogram bins for fitting
4
good number of bins for logarithmic bin width
0
Computing histogram bins with insensitivity to domain scale