Confused about an example of Brownian motion

I' am reading Introduction to Stochastic Processes by Lawler and have hit a particular example given in the book about Brownian motion that confuses me. I'll give most of example here:

Let $t>1$ and let us compute the probability that a standard Brownian motion crosses the x-axis sometime between 1 and $t$, i.e.,

By symmetry, again the probability is the same if $X_1=-b$. Hence, by averaging over all possible values of b we get

I skipped the work that was need to demonstrate the last one. I' am confused since $X_t$ is a continuous random variable, so the probability it takes on an particular value is 0. So shouldn't the following be true?

When a ballplayer gets a home run, that's nice--but it happens all the time. When first he points to where the ball will go over the wall, and hits a home run precisely there on the very next pitch, we are deeply impressed.

This analogy suggests your intuition is correct: if you were to preselect any individual number $s$ between $1$ and $t$, and then observe many realizations of this "random walk" process, almost surely none of them would cross the x-axis precisely at $s$. We would be deeply impressed at your clairvoyance were that to happen.

Here is what some of these realizations look like. The figure plots six of them, distinguished by color. All start at $(0,0)$, but only the portions between $1$ and $t=2$ are shown. 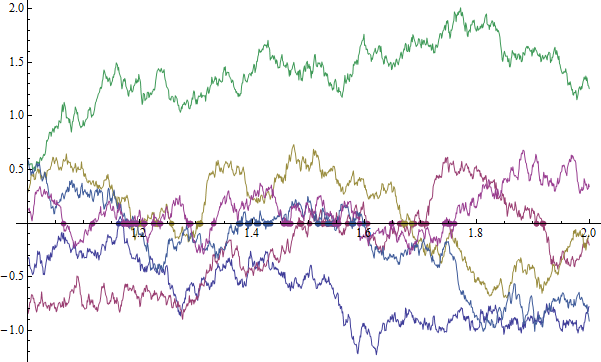 As it happens, five of these six realizations cross the x-axis somewhere between $1$ and $2$ (at the points shown as dots).

Since these paths are almost surely continuous, the Intermediate Value Theorem (of elementary Calculus) implies that whenever one crosses the x-axis, it must actually meet it: that is, for five of these six paths there exists at least one $s$ in the interval $[1, t]$ for which the path's height actually equals $0$. We should be no more surprised that this happens than we are that at least one player hits a home run during a baseball game.

Another way to see why the chance of a crossing in $[1,t]$ is nonzero is to observe that a crossing almost certainly occurs when $X_1$ is positive and $X_t$ is negative. Thus, the chance of a crossing is at least as great as the chance that simultaneously $X_1 \gt 0$ and $X_t \le 0$. It should be obvious that these individual chances are large (each equals $1/2$, because both $X_1$ and $X_t$ have zero-mean Normal distributions). It should be almost as obvious that, despite the positive correlation between $X_1$ and $X_t$, the simultaneous chance is still pretty good--and certainly not zero.