I am taking measurements of a computer system performance over time and I'd like to understand if the performance is degrading or improving as time passes..

After doing some research, I picked the KS test for this comparison, and I'd like to confirm whether my understanding and application of the two-sample KS test to this problem is in fact correct or if I am doing it completely wrong.

Anyway, I have some time-series data, measuring my system response time (in milliseconds) for the months of November and December. Here are the sample results, summarised for brevity:

I generate ECDFs from the histograms and plot using R: 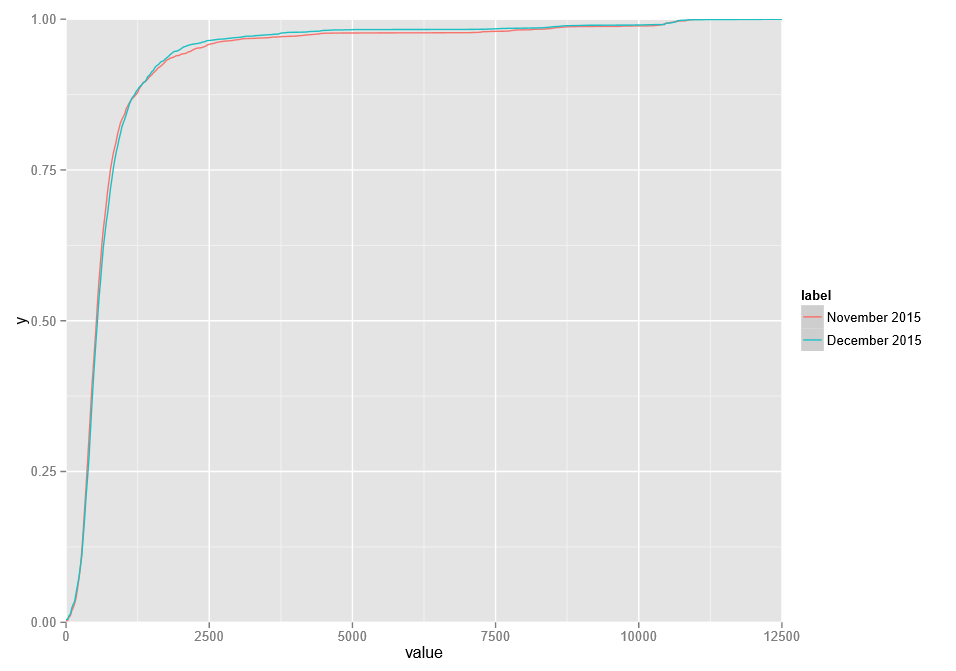 From visual inspection, it is evident, that December results are generally better than November's, especially in the top quartile.

I run a two-sample KS test on the data as follows, using different alternative hypothesis:

This results in the following:

If I understood the KS test and interpreted the results correctly, this is what the test is telling me about my data:

Hypothesis #2: the CDF of x lies below that of y

Hypothesis #3: the CDF of x lies above that of y

So from this I can say with some certainty, that November is worse that December.

Have I interpreted the results correctly or have I completely miss-understood the test (and possibly the purpose/application of the test)?

First, please note that your understanding of what the p-values mean is not correct. E.g.:

If the p-value is considered "very low" (how much, it's up to you to decide by stipulating a p-value threshold, say 0.05 by tradition), then you may say that it seems to be very unlikely that the test statistic value came from the null distribution by chance (although it could!), therefore it's reasonable to reject the null hypothesis.

Second, would it not have been easier to compare just the means of the system response times between November/December using a t-test (if the raw data are approx. normally distributed), or to compare the sample locations with a Wilcoxon-Mann-Whitney U-test? Please note that I am not familiar with the task at hand so this might be a completely useless suggestion.

Sorry, I think that you misunderstood this metrics purpose. KS gives a criterion about the similarity of the distribution of two dataset. In this cases p-value indicates the probability that both dataset have the same distribution.

Not the answer you're looking for? Browse other questions tagged r kolmogorov-smirnov-test empirical-cumulative-distr-fn or ask your own question.