I'm a track/running coach in Texas. That's my gentle way of saying that I don't have a statistical background, but I'm trying to learn what I can. Forgive me if I don't use the lexicon correctly.

I have been collecting the finishing times of the top six places at a particular annual meet in 102 running events (51 each for boys and girls, considering there are multiple age groups). I have aggregated the results from the past 17 years, for a total of 10,404 entries. This is available in a Google Fusion Table here, in case anyone is interested.

My objective is to try to predict the finishing time of each of the top six places at next year's meet (2016), which means I'll be using 17 entries per prediction. This means I'll make around 555 predictions; I'm not going to make predictions for 57 other places due to gaps in the data. Additionally, I'd like to come up with a range above and below this prediction that will add reasonable certainty. Originally, I called this a "confidence interval" (I used 95%) but after further reading, "prediction interval" appears to be more correct. Then again, I get confused, because this isn't a random sampling of information.

I originally used a spreadsheet formula to derive my predictions and range, but this has sprawled out of control and I've lost track of my own thought process (reader beware: the formula for each of those cells is a mammoth, ugly beast). Although there is a correlation here (times have improved gradually over the years in almost every event, due to increased participation) it's obviously not linear, since it must even out before it reaches zero.

My questions are thus:

Thanks so much for your help and patience.

EDIT: As one commenter has noted, the data also includes the number of participants in each event.

Also, it has been a couple of years since I set up my initial equation, but for those of you who don't want to sort through that ugly spreadsheet formula, I believe I used this: $$ f(y)~=~\overbrace{\underbrace{m~\cdot~\ln(x)~+~a}_\text{Time Prediction}~\mp~\underbrace{\frac{{t_{\alpha,v}\cdot SE_y}}{\sqrt{{n}}}}_{\Delta y}}^\text{Lower and Upper Confidence Limits} $$ Again, amateur here, so forgive me if that's gibberish.

I upvoted you because I like this as a whole. I do wish you had more data to really demonstrate the difference in time crossing the finish line by age groups and gender under different circumstances, like the temperature of the air that day and maybe a few others. To predict the outcome of an event is difficult, but with more data, you can predict anything to a relatively high degree of accuracy. What I have done was to get the "Mean", and "Standard Deviation" and run a simulation on a possible finishing time. 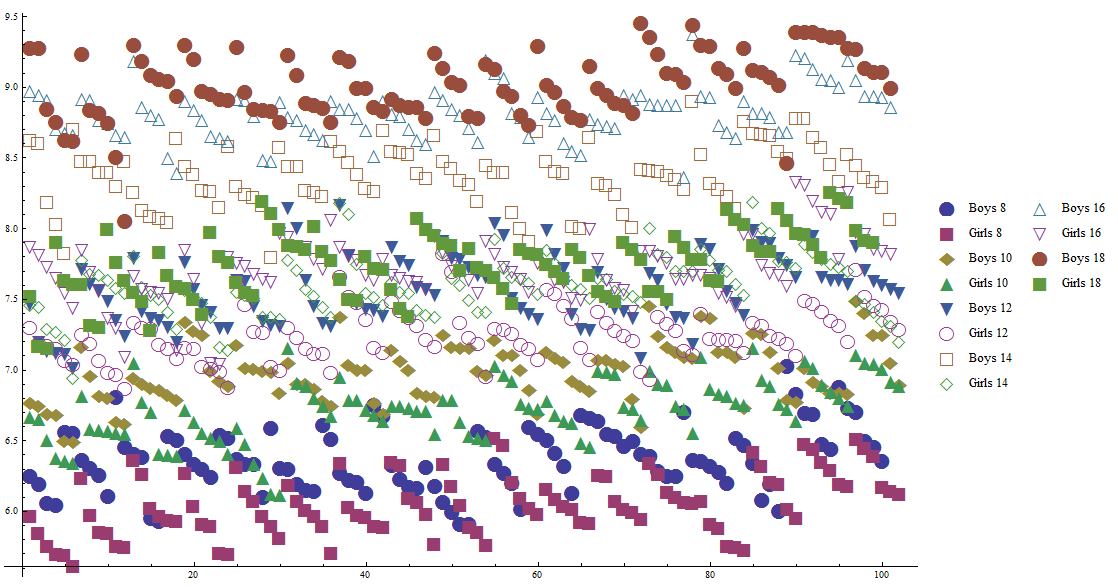 Not the answer you're looking for? Browse other questions tagged r time-series prediction pspp or ask your own question.