Use of fixed effects and random effects

When can we do a linear regression without fixed or random effects and when do we need to use those in the regression analysis? I have tried studying a lot but have got only a vague idea. I would be extremely thankful if anyone can explain me with examples.

Here is a standard linear panel data model: $$ y_{it}=X_{it}\delta+\alpha_i+\eta_{it}, $$ the so-called error component model. Here, $\alpha_i$ is what is sometimes called individual-specific heterogeneity, the error component that is constant over time. The other error component $\eta_{it}$ is "idiosyncratic", varying both over units and over time.

A reason to use a random or fixed effects approach instead of pooled OLS is that the presence of $\alpha_i$ will lead to an error covariance matrix that is not "spherical" (so not a multiple of the identity matrix(, so that a GLS-type approach like random effects will be more efficient than OLS.

If, however, the $\alpha_i$ correlate with the regressors $X_{it}$ - as will be the case in many typical applications - omitting these individual-specific intercepts will lead to omitted variable bias. Then, a fixed effect approach which effectively fits such intercepts will be more convincing.

The following figure aims to illustrate this point. The raw correlation between $y$ and $X$ is positive. But, the observations belonging to one unit (color) exhibit a negative relationship - this is what we would like to identify, because this is the reaction of $y_{it}$ to a change in $X_{it}$.

So, random effects or pooled OLS would be the wrong strategy here, because it would result in a positive esimate of $\delta$, as these two estimators basically ignore the colors (RE only incroporates the colors for the estimate of the variance covariance matrix). 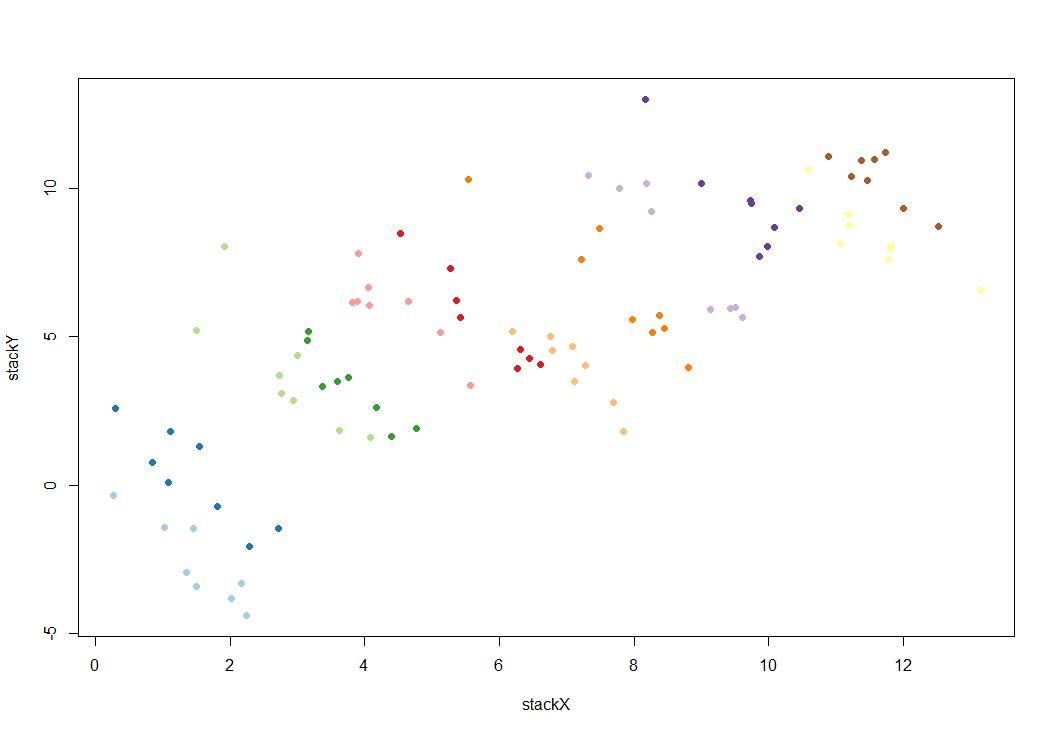 Not the answer you're looking for? Browse other questions tagged regression panel-data random-effects-model fixed-effects-model or ask your own question.