I found some pros of discriminant analysis and I've got questions about them. So:

If number of features is small and the distribution of the predictors $X$ is approximately normal in each of the classes, the linear discriminant model is again more stable than the logistic regression model.

LDA is popular when we have more than two response classes, because it also provides low-dimensional views of the data.

If there are covariate values that can predict the binary outcome perfectly then the algorithm of logistic regression, i.e. Fisher scoring, does not even converge. If you are using R or SAS you will get a warning that probabilities of zero and one were computed and that the algorithm has crashed. This is the extreme case of perfect separation but even if the data are only separated to a great degree and not perfectly, the maximum likelihood estimator might not exist and even if it does exist, the estimates are not reliable. The resulting fit is not good at all. There are many threads dealing with the problem of separation on this site so by all means take a look.

By contrast, one does not often encounter estimation problems with Fisher's discriminant. It can still happen if either the between or within covariance matrix is singular but that is a rather rare instance. In fact, If there is complete or quasi-complete separation then all the better because the discriminant is more likely to be successful.

It is also worth mentioning that contrary to popular belief LDA is not based on any distribution assumptions. We only implicitly require equality of the population covariance matrices since a pooled estimator is used for the within covariance matrix. Under the additional assumptions of normality, equal prior probabilities and misclassification costs, the LDA is optimal in the sense that it minimizes the misclassification probability.

How does LDA provide low-dimensional views?

It's easier to see that for the case of two populations and two variables. Here is a pictorial representation of how LDA works in that case. Remember that we are looking for linear combinations of the variables that maximize separability. 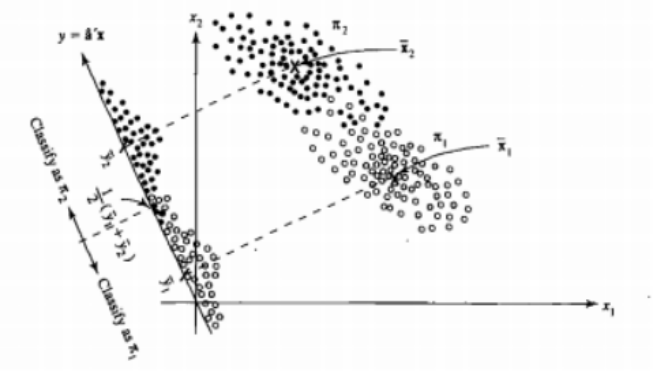 The general case of more than two populations and variables is dealt similarly. If the dimension is large, then more linear combinations are used to reduce it, the data are projected on planes or hyperplanes in that case. There is a limit to how many linear combinations one can find of course and this limit results from the original dimension of the data. If we denote the number of predictor variables by $p$ and the number of populations by $g$, it turns out that the number is at most $\min(g-1,p)$.

If you can name more pros or cons, that would be nice.

The low-dimensional representantion does not come without drawbacks nevertheless, the most important one being of course the loss of information. This is less of a problem when the data are linearly separable but if they are not the loss of information might be substantial and the classifier will perform poorly.

There might also be cases where the equality of covariance matrices might not be a tenable assumption. You can employ a test to make sure but these tests are very sensitive to departures from normality so you need to make this additional assumption and also test for it. If it is found that the populations are normal with unequal covariance matrices a quadratic classification rule might be used (QDA) instead but I find that this is a rather awkward rule, not to mention counterintuitive in high dimensions.

Overall, the main advantage of the LDA is the existence of an explicit solution and its computational convenience which is not the case for more advanced classification techniques such as SVM or neural networks. The price we pay is the set of assumptions that go with it, namely linear separability and equality of covariance matrices.

EDIT: I suspect my claim that the LDA on the specific cases I mentioned does not require any distributional assumptions other than equality of the covariance matrices has cost me a downvote. This is no less true nevertheless so let me be more specific.

If we let $\bar{\mathbf{x}}_i, \ i = 1,2$ denote the means from the first and second population, and $\mathbf{S}_{\text{pooled}}$ denote the pooled covariance matrix, Fisher's discriminant solves the problem

This is equivalent to the LDA you derive under the assumption of normality, equal covariance matrices, misclassification costs and prior probabilities, right? Well yes, except now that we have not assumed normality.

There is nothing stopping you from using the discriminant above in all settings, even if the covariance matrices are not really equal. It might not be optimal in the sense of the expected cost of misclassification (ECM) but this is supervised learning so you can always evaluate its performance, using for instance the hold-out procedure.

LDA makes severe distributional assumptions (multivariate normality of all predictors) unlike logistic regression. Try getting posterior probabilities of class membership on the basis of subjects' sex and you'll see what I mean - the probabilities will not be accurate.

The instability of logistic regression when a set of predictor values gives rise to a probability of 0 or 1 that $Y=1$ is more or less an illusion. Newton-Raphson iterations will converge to $\beta$s that are close enough to $\pm \infty$ (e.g., $\pm 30$) so that predicted probabilities are essentially 0 or 1 when they should be. The only problem this causes is the Hauck-Donner effect in the Wald statistics. The solution is simple: don't use Wald tests in this case; use likelihood ratio tests, which behave very well even with infinite estimates. For confidence intervals use profile likelihood confidence intervals if there is complete separation.

See this for more information.

Note that if multivariable normality holds, by Bayes' theorem the assumptions of logistic regression hold. The reverse is not true.

Normality (or at the very least symmetry) must almost hold for variances and covariances to "do the job". Non-multivariate normally distributed predictors will even hurt the discriminant extraction phase.

In order to fit a (nonlinear) function well you need observations in all regions of the function where "its shape changes". Logistic regression fits a sigmoid function to the data:

In the case of well-separated classes all observations will fall onto the two "ends" where the sigmoid approaches its asymptotes (0 and 1). Since all sigmoids "look the same" in these regions, so to speak, no wonder the poor fitting algorithm will have difficulties to find "the right one".

Case 1: The two groups overlap to quite some extent: 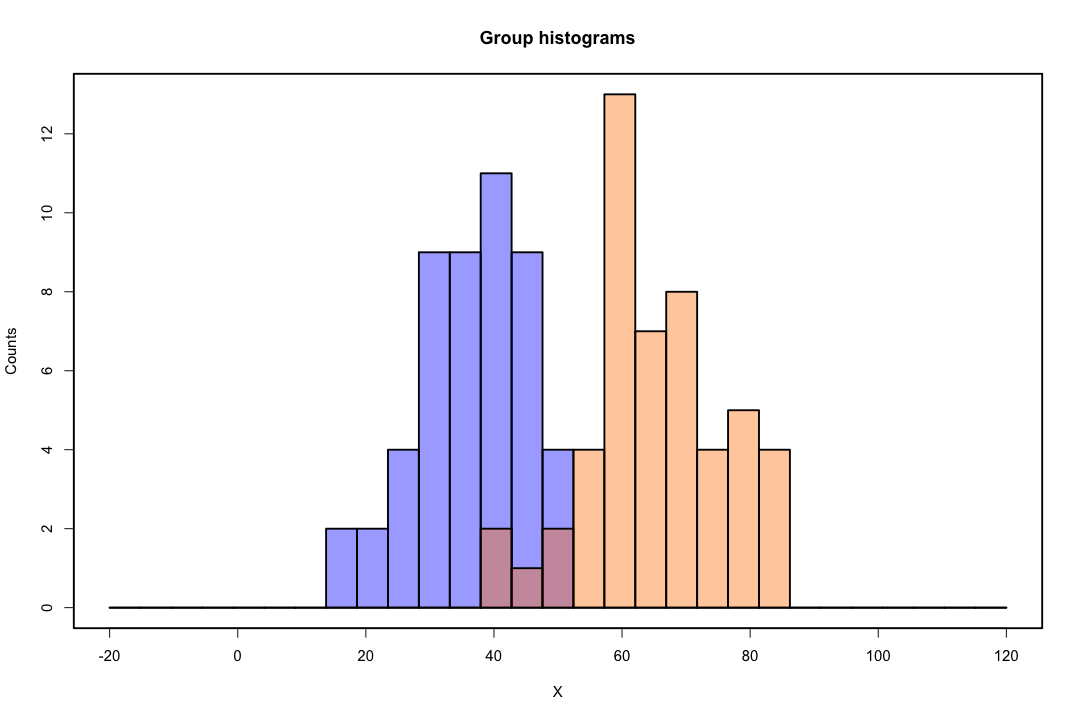 and the observations distribute nicely around the inflexion point of the fitted sigmoid: 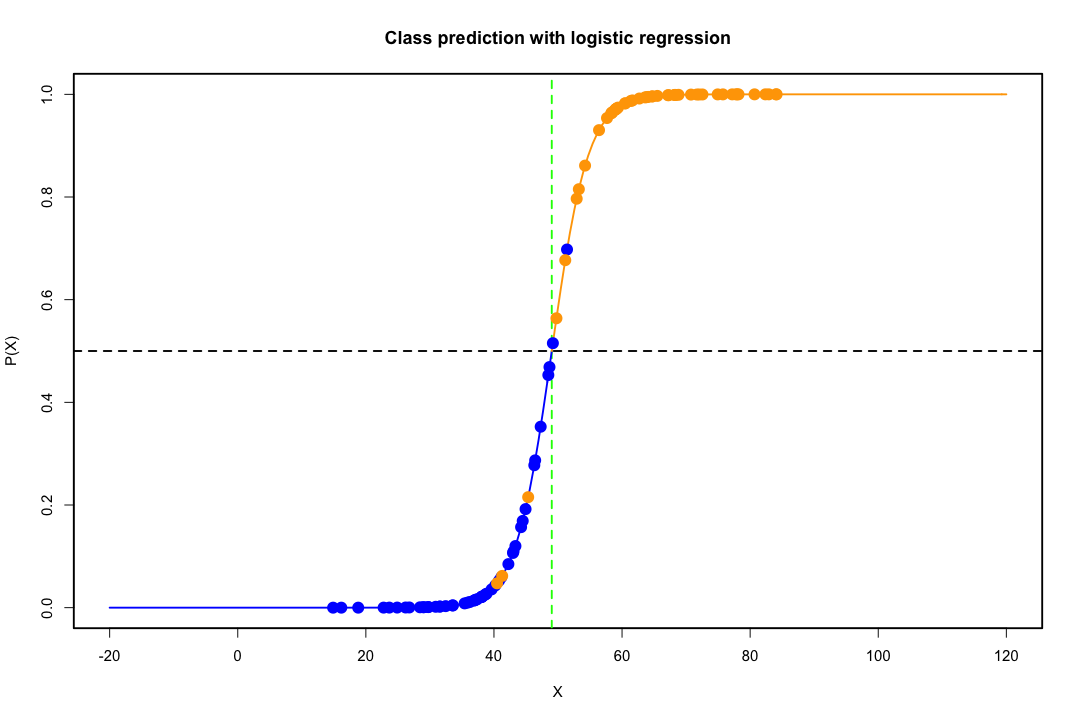 These are the fitted the parameters with nice low standard errors:

and the deviance also looks OK: 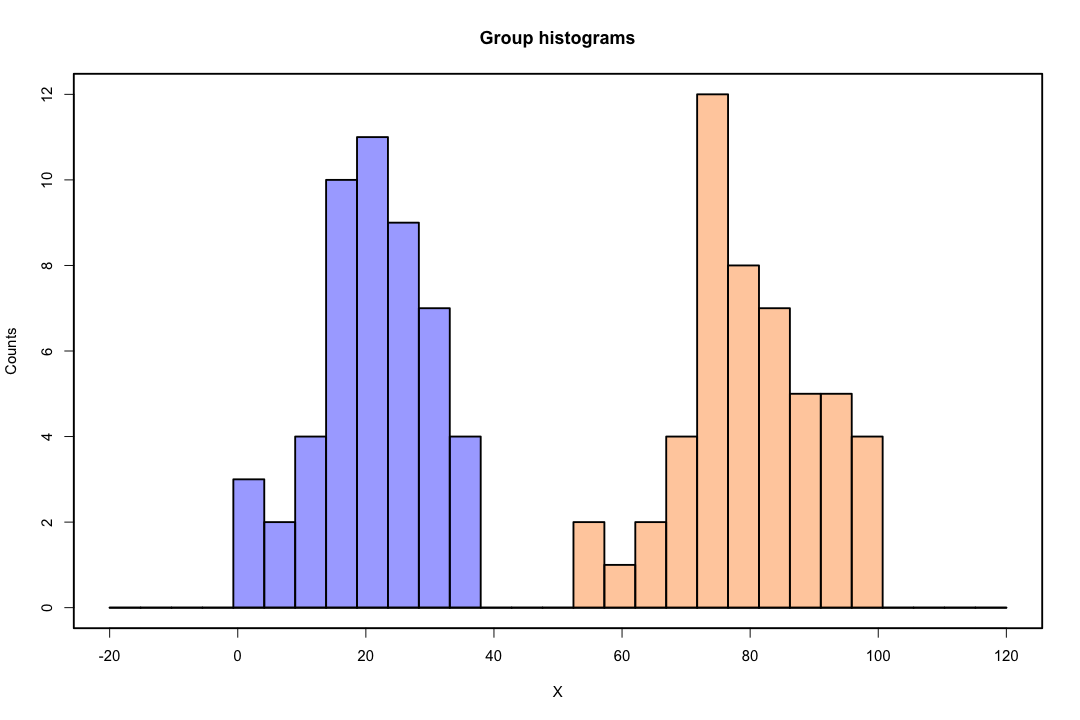 and the observations all lie on the asymptotes practically. The glm() function tried its best to fit something, but complained about numerically 0 or 1 probabilities, because there are simply no observations available to "get the shape of the sigmoid right" around its inflexion point: 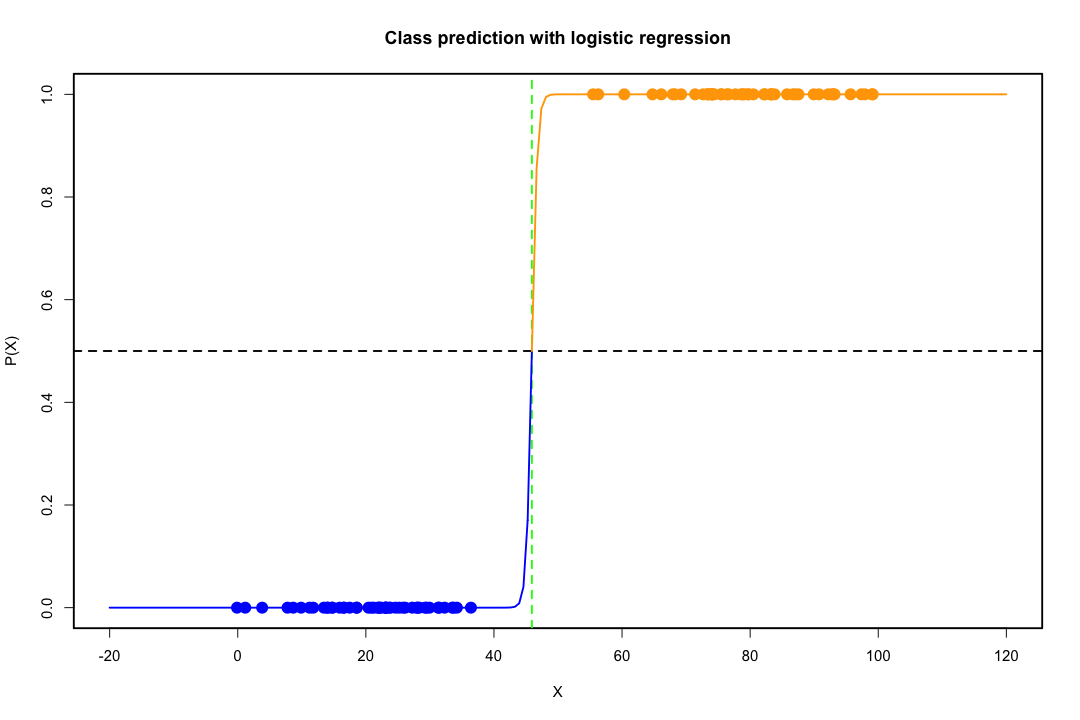 You can diagnose the problem by noting that the standard errors of the estimated parameters go through the roof:

and at the same time the deviance looks suspiciously good (because the observations do fit the asymptotes well):

At least intuitively it should be clear from these considerations why "the parameter estimates for logistic regression are surprisingly unstable".

Not the answer you're looking for? Browse other questions tagged regression logistic multivariate-analysis discriminant-analysis or ask your own question.