When (and why) should you take the log of a distribution (of numbers)?

Say I have some historical data e.g., past stock prices, airline ticket price fluctuations, past financial data of the company...

Now someone (or some formula) comes along and says "let's take/use the log of the distribution" and here's where I go WHY?

I've really wanted to understand log-based distributions (for example lognormal) but I never understood the when/why aspects - i.e., the log of the distribution is a normal distribution, so what? What does that even tell and me and why bother? Hence the question!

UPDATE: As per @whuber's comment I looked at the posts and for some reason I do understand the use of log transforms and their application in linear regression, since you can draw a relation between the independent variable and the log of the dependent variable. However, my question is generic in the sense of analyzing the distribution itself - there is no relation per se that I can conclude to help understand the reason of taking logs to analyze a distribution. I hope I'm making sense :-/

This question deserves a clear answer as to "WHY and WHEN"

If you assume a model form that is non-linear but can be transformed to a linear model such as $\log Y = \beta_0 + \beta_1t$ then one would be justified in taking logarithms of $Y$ to meet the specified model form. In general whether or not you have causal series , the only time you would be justified or correct in taking the Log of $Y$ is when it can be proven that the Variance of $Y$ is proportional to the Expected Value of $Y^2$ . I don't remember the original source for the following but it nicely summarizes the role of power transformations. It is important to note that the distributional assumptions are always about the error process not the observed Y, thus it is a definite "no-no" to analyze the original series for an appropriate transformation unless the series is defined by a simple constant.

Unwarranted or incorrect transformations including differences should be studiously avoided as they are often an ill-fashioned /ill-conceived attempt to deal with unidentified anomalies/level shifts/time trends or changes in parameters or changes in error variance. A classic example of this is discussed starting at slide 60 here http://www.autobox.com/cms/index.php/afs-university/intro-to-forecasting/doc_download/53-capabilities-presentation where three pulse anomalies (untreated) led to an unwarranted log transformation by early researchers. Unfortunately some of our current researchers are still making the same mistake. 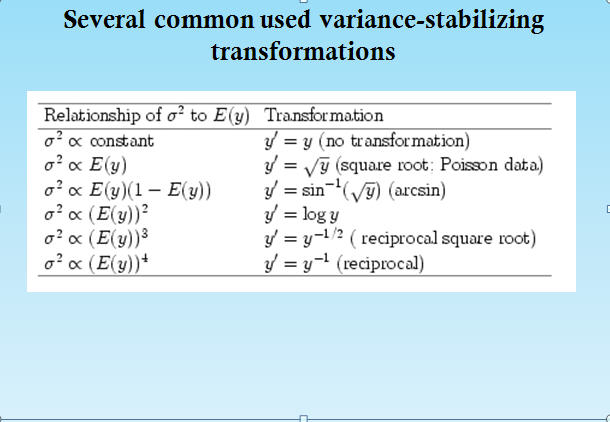 Note that when you have no predictor/causal/supporting input series, the model is $Y_t=u +a_t$ and that there are no requirements made about the distribution of $Y$ BUT are made about $a_t$, the error process. In this case the distributional requirements about $a_t$ pass directly on to $Y_t$. When you have supporting series such as in a regression or in a Autoregressive–moving-average model with exogenous inputs model (ARMAX model) the distributional assumptions are all about $a_t$ and have nothing whatsoever to do with the distribution of $Y_t$. Thus in the case of ARIMA model or an ARMAX Model one would never assume any transformation on $Y$ before finding the optimal Box-Cox transformation which would then suggest the remedy (transformation) for $Y$. In earlier times some analysts would transform both $Y$ and $X$ in a presumptive way just to be able to reflect upon the percent change in $Y$ as a result in the percent change in $X$ by examining the regression coefficient between $\log Y$ and $\log X$. In summary, transformations are like drugs some are good and some are bad for you! They should only be used when necessary and then with caution.

Log-scale informs on relative changes (multiplicative), while linear-scale informs on absolute changes (additive). When do you use each? When you care about relative changes, use the log-scale; when you care about absolute changes, use linear-scale. This is true for distributions, but also for any quantity or changes in quantities.

Note, I use the word "care" here very specifically and intentionally. Without a model or a goal, your question cannot be answered; the model or goal defines which scale is important. If you're trying to model something, and the mechanism acts via a relative change, log-scale is critical to capturing the behavior seen in your data. But if the underlying model's mechanism is additive, you'll want to use linear-scale.

If we convert to log space, relative changes appear as absolute changes.

Now, taking the absolute difference in log space, we find that both changed by .0413.

Both of these measures of change are important, and which one is important to you depends solely on your model of investing. There are two models. (1) Investing a fixed amount of principal, or (2) investing in a fixed number of shares.

Model 1: Investing with a fixed amount of principal.

Now suppose we think of a stock value as a random variable fluctuating over time, and we want to come up with a model that reflects generally how stocks behave. And let's say we want to use this model to maximize profit. We compute a probability distribution whose x-values are in units of 'share price', and y-values in probability of observing a given share price. We do this for stock A, and stock B. If you subscribe to the first scenario, where you have a fixed amount of principal you want to invest, then taking the log of these distributions will be informative. Why? What you care about is the shape of the distribution in relative space. Whether a stock goes from 1 to 10, or 10 to 100 doesn't matter to you, right? Both cases are a 10-fold relative gain. This appears naturally in a log-scale distribution in that unit gains correspond to fold gains directly. For two stocks whose mean value is different but whose relative change is identically distributed (they have the same distribution of daily percent changes), their log distributions will be identical in shape just shifted. Conversely, their linear distributions will not be identical in shape, with the higher valued distribution having a higher variance.

If you were to look at these same distributions in linear, or absolute space, you would think that higher-valued share prices correspond to greater fluctuations. For your investing purposes though, where only relative gains matter, this is not necessarily true.

Example 2. Chemical reactions. Suppose we have two molecules A and B that undergo a reversible reaction.

which is defined by the individual rate constants

Their equilibrium is defined by the relationship:

Two points here. (1) This is a multiplicative relationship between the concentrations of $A$ and $B$. (2) This relationship isn't arbitrary, but rather arises directly from the fundamental physical-chemical properties that govern molecules bumping into each other and reacting.

That said, if you have a model, be it for stock market prediction or chemical kinetics, you can always interconvert 'losslessly' between linear and log space, so long as your range of values is $(0,\inf)$. Whether you choose to look at the linear or log-scale distribution depends on what you're trying to obtain from the data.

EDIT. An interesting parallel that helped me build intuition is the example of arithmetic means vs geometric means. An arithmetic (vanilla) mean computes the average of numbers assuming a hidden model where absolute differences are what matter. Example. The arithmetic mean of 1 and 100 is 50.5. Suppose we're talking about concentrations though, where the chemical relationship between concentrations is multiplicative. Then the average concentration should really be computed on the log scale. This is called the geometric average. The geometric average of 1 and 100 is 10! In terms of relative differences, this makes sense: 10/1 = 10, and 100/10 = 10, ie., the relative change between the average and two values is the same. Additively we find the same thing; 50.5-1= 49.5, and 100-50.5 = 49.5.

I wanted to give an answer in the simplist form. If exponents are short hand for multiplication, and log is the inverse of exponentiation, the taking the log of something is a form of division.

If we had another function on the same plot of y=1,000,000 it would be hard to graph those together given the range on the y axis. But if we use log() on both now we have functions y=5 and y= 6.

Extend this to simple linear form of y = mx + C and you can see how powerful this can be as things get increasing poweful.

To use a one senetence analogy log transform is equivalent to the scale on a map that says 1in = 1 mile. We dont want a map where 1 mile = 1 mile.. Logarithms scale down when we need it. Exponents scale up. We use both for normalizing data

In statistical inference or parameter learning processes, it's very common to cumulate product a series of probability densities. But some times the individual densities are too small (or too big) that computer won't be able to store their product. For example we want to calculate a likelihood $L=p_1 \cdot p_2$ where $p_1=8e^{-300}$ and $p_2=6e^{-300}$, but if you multiply them together in a computer you will get $L=0$, because the true result $4.8e^{-601}$ is smaller than the smallest positive number a computer can handle. Hence we always use log probabilities or log probability densities during computation.

As explained in "Why use log?", it is recommended to use log densities/probabilities for all inference and model learning processes.

Not the answer you're looking for? Browse other questions tagged distributions data-transformation logarithm or ask your own question.

5
Need help understanding what a natural log transformation is actually doing and why specific transformations are required for linear regression
3
Why it is good to take log on Finance data? Does it have nice properties?
1
Why is it okay to take the log (or any other transformation) of the dependent variable?
1
For my study design: When to log-transform data vs. when to use a non-parametric approach
1
Why would you want to use a transformation function?
192
In linear regression, when is it appropriate to use the log of an independent variable instead of the actual values?
52
Interpretation of log transformed predictor and/or response
17
What could be the reason for using square root transformation on data?
22
Transforming proportion data: when arcsin square root is not enough
15
Is Prophet from Facebook any different from a linear regression?
See more linked questions

3
What's the difference in growth of Y in a linear regression model when using a log-lin model or a lin-log model
3
Detrending or not and should I always take log first?
1
Control for over-dispersion. Why do this: take natural log of metric, exponentiate, rank, remove top and bottom 10%
5
When is the log-normal distribution appropriate?
4
Why do we log transform response ratios?