I have a binomial GAM with a smooth-by-random-factor interaction. From this I am able to predict and visualize the smooth term for any level of my random effects: 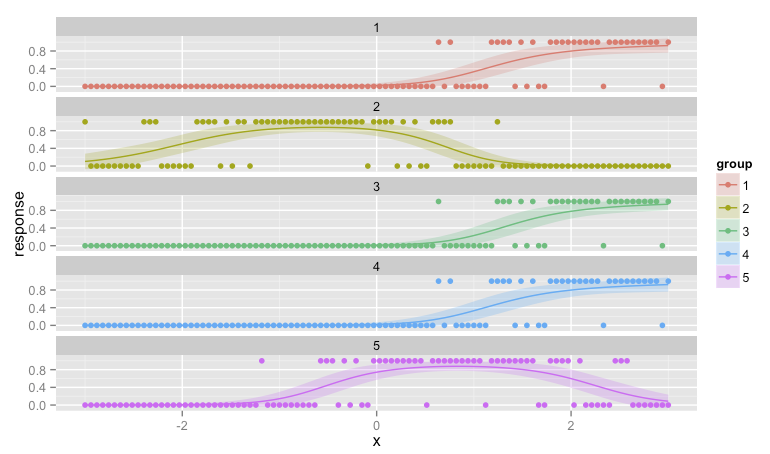 How do I predict the mean smooth and confidence intervals around it?

The solution suggested by Simon Wood to the simpler problem of predicting the population level effect from a model with random intercepts represented as a smooth is to use a by variable in the random effect smooth. See this Answer for some detail.

You can't do this dummy trick directly with your model as you have the smooth and random effects all bound up in the 2d spline term. As I understand it, you should be able to decompose your tensor product spline into "main effects" and the "spline interaction". I quote these as the decomposition will be to split out the fixed effects and random effects parts of the model.

Nb: I think I have this right but it would be helpful to have people knowledgeable with mgcv give this a once over.

This is what I came up with:

To get the population level we need just the effect of s(x, bs = "ts") and zero out the other terms. 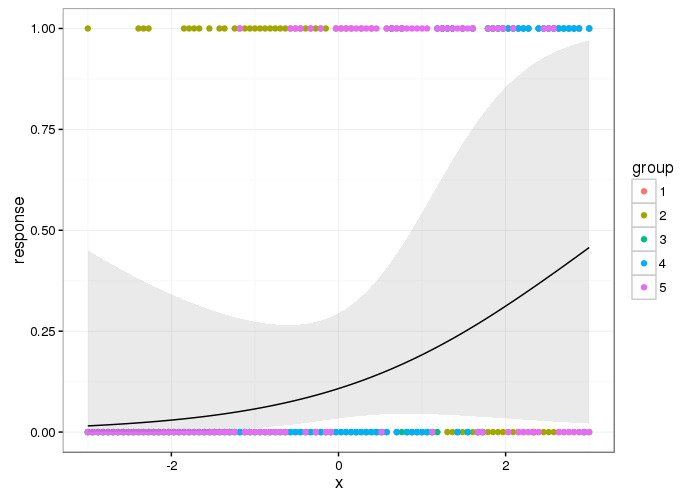 From a cursory inspection this looks qualitatively similar to the result from Ben's answer but it is smoother; you don't get the blips where the next group's data is not all zero. 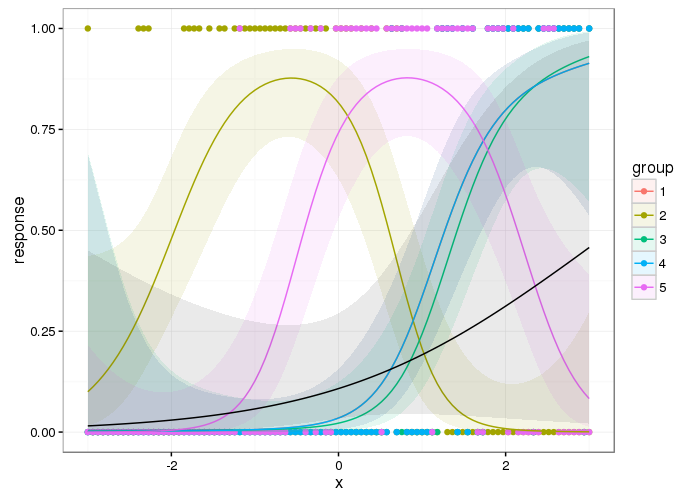 It depends. There are a bunch of ways to define the "average" response. The answer here is based on the unweighted average across groups; with this simple, artificial example it doesn't make any difference, but in other cases you might want to take a population-weighted average.

n.b. there are several reasons the following is not quite right, although it's not an unreasonable start

I will update when I get a chance, but it's still a slightly useful answer

Repeating data generation for my convenience ...

Tweak prediction step a tiny bit to retain se in the results (it would be nice to write a broom::augment() method for this case ...)

Generate mean predictions by averaging at each value of x; construct confidence intervals by adding "in quadrature" (i.e. sqrt(sum(x^2))) (I don't know why c() is necessary, but it seems to be).

Not the answer you're looking for? Browse other questions tagged r generalized-additive-model mgcv or ask your own question.