Did I just invent a Bayesian method for analysis of ROC curves?

This is a long post. If you're re-reading this, please note that I've revised the question portion, though the background material remains the same. Additionally, I believe that I've devised a solution to the problem. That solution appears at the bottom of the post. Thanks to CliffAB for pointing out that my original solution (edited out of this post; see edit history for that solution) necessarily produced biased estimates.

In machine learning classification problems, one way to assess model performance is by comparing ROC curves, or area under the ROC curve (AUC). However, it's my observation that there's precious little discussion of the variability of ROC curves or estimates of AUC; that is, they're statistics estimated from data, and so have some error associated with them. Characterizing the error in these estimates will help characterize, for example, whether one classifier is, indeed, superior to another.

I've developed the following approach, which I call Bayesian analysis of ROC curves, to address this the problem. There are two key observations in my thinking about the problem:

The Bayesian approach can be used to simulate large number of AUCs from a single set of estimates. For example, 20 simulations look like this compared to the original data. 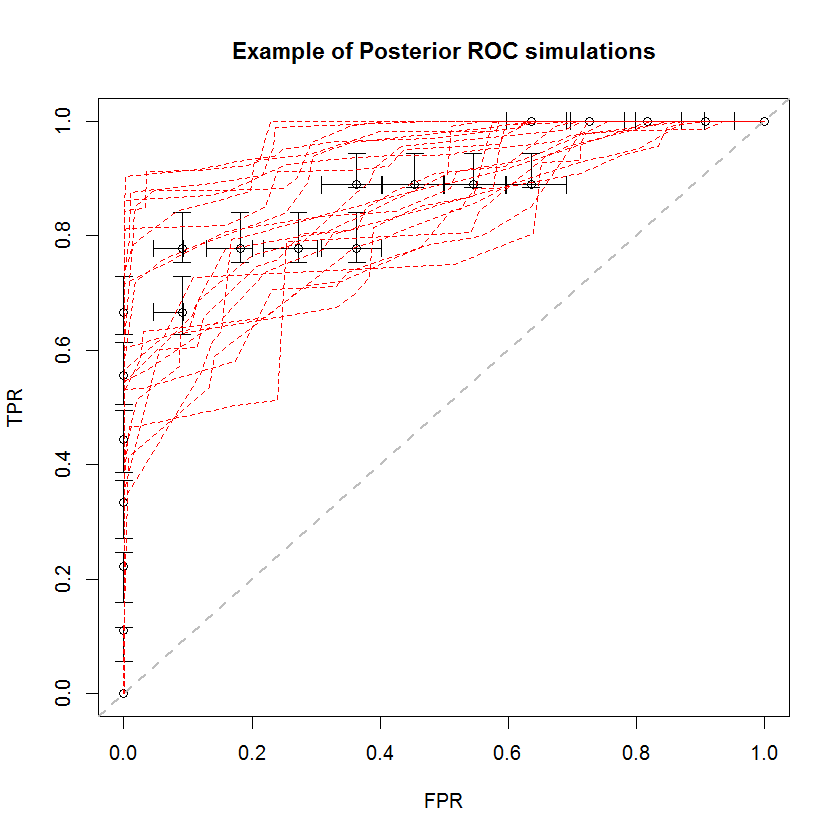 This method has a number of advantages. For example, the probability that the AUC of one model is greater than another can be directly estimated by comparing the AUC of their posterior simulations. Estimates of variance can be obtained via simulation, which is cheaper than resampling methods, and these estimates do not incur the problem of correlated samples which arise from resampling methods.

I developed a solution to this problem by making a third and fourth observation about the nature of the problem, in addition to the two above. 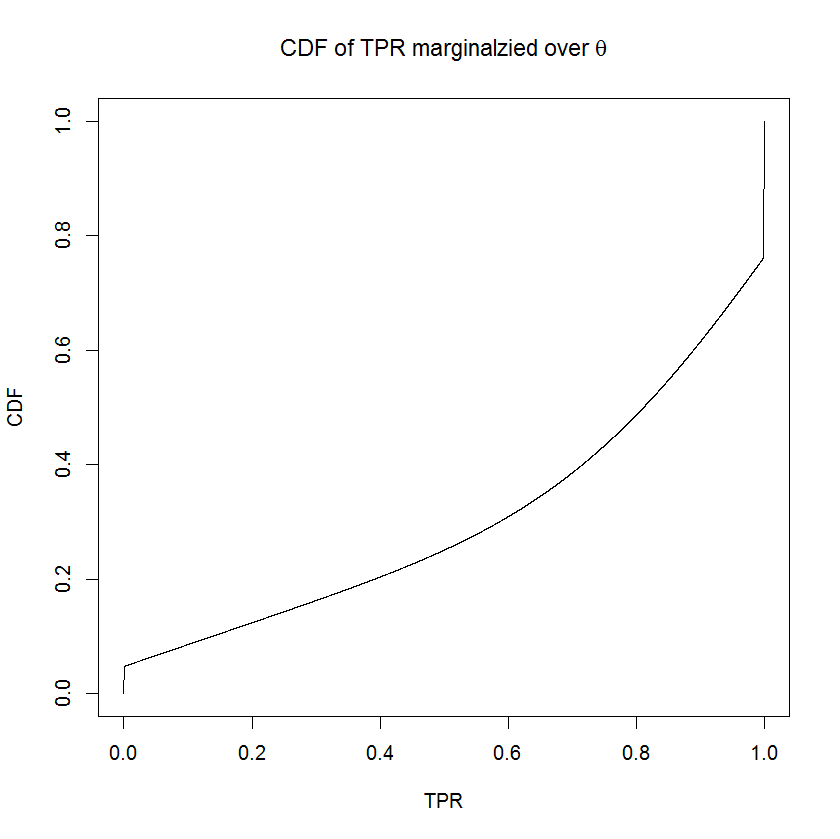 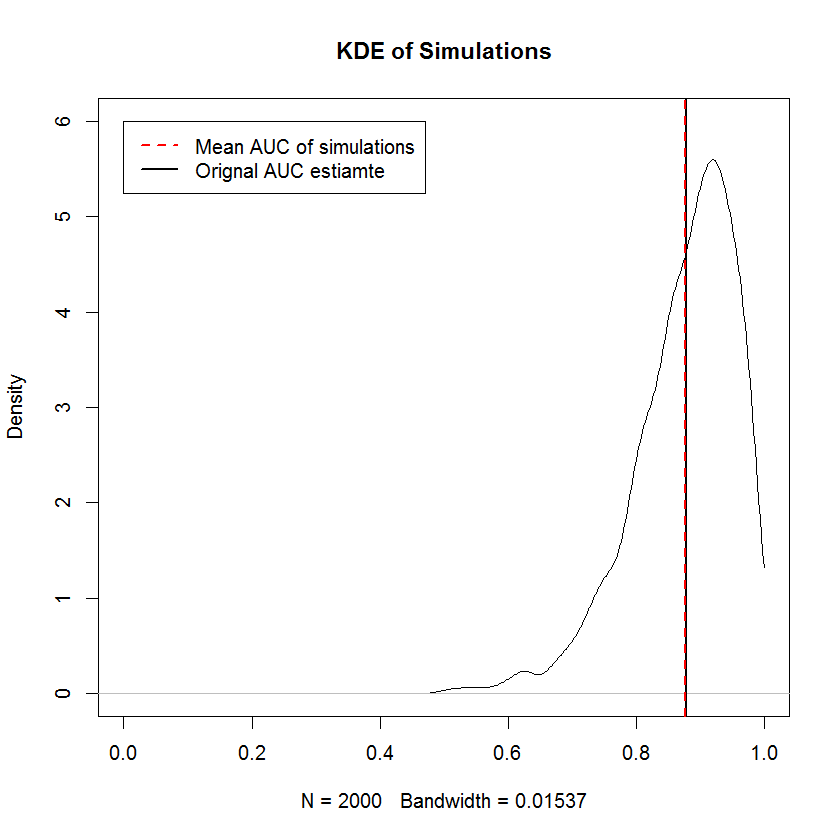 Comparison to the Bootstrap

In a lengthy chat discussion with @AdamO (thanks, AdamO!), he pointed out that there are several established methods to compare two ROC curves, or to characterize the variability of a single ROC curve, among them the bootstrap. So as an experiment, I tried bootstrapping the my example which as $n=20$ observations in the holdout set and comparing the results to the Bayesian method. The results are compared below (The bootstrap implementation here is the simple bootstrap -- randomly sampling with replacement to the size of the original sample. Cursory reading on bootstraps exposes significant gaps in my knowledge on re-sampling methods, so perhaps this is not an appropriate approach.) 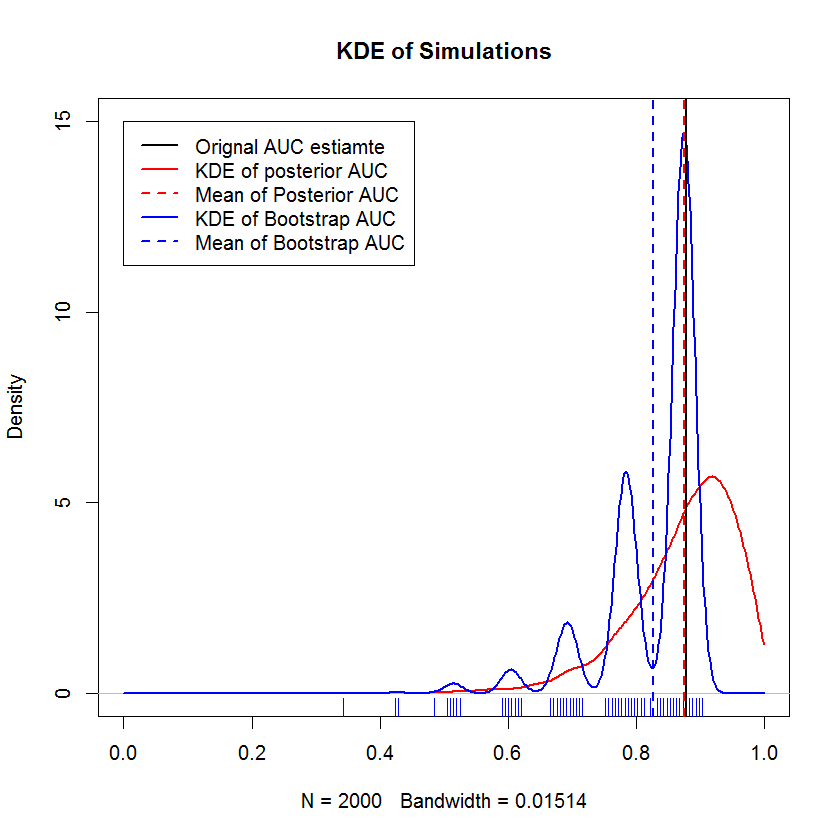 This demonstration shows that the mean of the bootstrap is biased below the mean of the original sample, and that the KDE of the bootstrap yields well-defined "humps". The genesis of these humps is hardly mysterious -- the ROC curve will be sensitive to the inclusion of each point, and the effect of a small sample (here, n=20) is that the underlying statistic is more sensitive to the inclusion of each point. (Emphatically, this patterning is not an artifact of the kernel bandwidth -- note the rug plot. Each stripe is several bootstrap replicates that have the same value. The bootstrap has 2000 replicates, but the number of distinct values is clearly much smaller. We can conclude that the humps are an intrinsic feature of the bootstrap procedure.) By contrast, mean Bayesian AUC estimates tend to be very near to the original estimate, and "smooth out" the humps that the bootstrap exhibits.

My revised question is whether my revised solution is incorrect. A good answer will prove (or disprove) that the resulting samples of ROC curves are biased, or likewise prove or disprove other qualities of this approach.

First off, there is no accepted way to "analyze" a ROC curve: it is merely a graphic that portrays the predictive ability of a classification model. You can certainly summarize a ROC curve using a c-statistic or the AUC, but calculating confidence intervals and performing inference using $c$-statistics is well understood due to its relation to the Wilcoxon U-statistic.

It's generally fairly well accepted that you can estimate the variability in ROC curves using the bootstrap cf Pepe Etzione Feng. This is a nice approach because the ROC curve is an empirical estimate and the bootstrap is non-parametric. Parameterizing anything in such a fashion introduces assumptions and complications such as "is a flat prior really noninformative?" I am not convinced this is the case here.

Lastly, there's the issue of pseudo likelihood. You can induced variability in the ROC curves by putting a prior on $\theta$ which, in all of ROC usage, is the only thing which is typically not considered a random variable. You have then assumed that the variability in TPR and FPR induced by variability in $\theta$ are independent. They are not. In fact they are completely dependent. You are sort calculating a Bayesian posterior for your own weight in kilograms and pounds and saying they do not depend on each other.

If one were to approach the issue of ROC "analysis" from a Bayesian perspective, it would perhaps be most useful to address the problem of model selection by putting a prior on the space of models used for analysis. That would be a very interesting problem.

Not the answer you're looking for? Browse other questions tagged machine-learning bayesian sampling roc auc or ask your own question.

5
How to interpret 95% confidence interval for Area Under Curve of ROC?
9
What statistical tests to compare two AUCs from two models on the same dataset?
-1
Are bootstrap distributions always Gaussian?
3
Confidence interval of AUC with Reitsma model in mada R package
-1
Is AUC (area under curve) a type of “empirical Bayes estimator”?

8
Decision threshold for a 3-class Naive Bayes ROC curve
11
Evaluation of classifiers: learning curves vs ROC curves
6
pattern of ROC curve and choice of AUC
1
Did I understand ROC curves correctly?
23
ROC vs Precision-recall curves on imbalanced dataset
0
ROC AUC and PR AUC: Are the AUC values different for each class?
1
ROC curve: models have different FPR ranges
1
How to calculate TPR and FPR and plot ROC curves for object detection?
1
AUC ROC and probabilistic interpretation