I'm reading a peer-reviewed article from a highly respected member of my field. In it the author defines equations for the mean and variance of the mean. 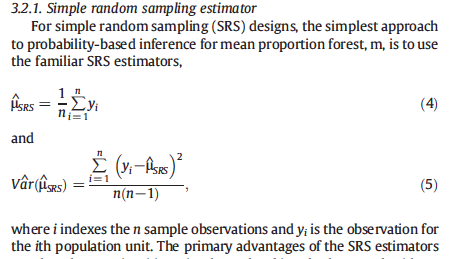 I'm trying to understand why the denominator for variance has both n and n-1 in it. I thought the basic equation for variance from a simple random sample was simply

and it seems like this author has added an additional component to the denominator- which changes the value of the variance substantially. Can someone enlighten me?

The estimator you have written is not unbiased! The unbiased estimator of the population variance that is most oftenly used is

but since the population variance, $\sigma^2$, is unknown we replace it by its unbiased estimator, namely the $S^2$. Putting that in the place of $\sigma^2$, you will obtain equation (5).

Here is a useful - and exciting - read on the matter.

Howard Wainer, Picturing the Uncertain World, The Most Dangerous Equation.

Not the answer you're looking for? Browse other questions tagged variance or ask your own question.

81
How exactly did statisticians agree to using (n-1) as the unbiased estimator for population variance without simulation?
5
Why is the variance of the error term (a.k.a., the "irreducible error") always 1 in examples of the bias-variance tradeoff?
3
How does the Welch correction for the t-test make the test non-parametric?
2
Justification for removing μ out of brackets in definitions of average of deviations and variance