P-values vs Coefficient Values in GLM

In the following excerpt, the author noted an association with the dependent variable based solely on the p-value and not the magnitude of the coefficient. Here is a link to the study. 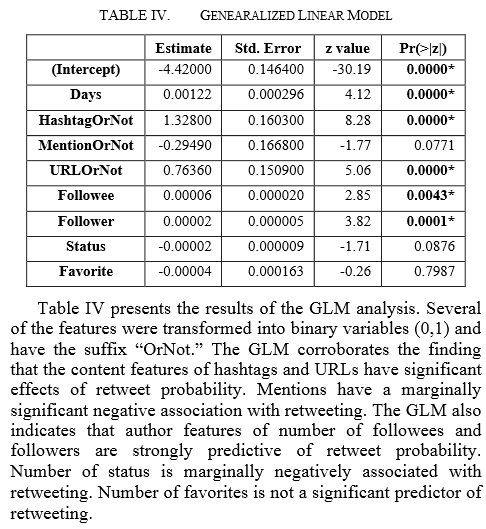 I thought that the coefficients would tell us the magnitude of change in the dependent variable with a change in the feature; like a gradient. Why are Followers and Followees strong predictors if they have such small coefficients?

Understanding the magnitude of the effect as expressed through the regression coefficient depends entirely on the scale on which the X variables are measured. Remember, the coefficient in a GLM model represents the change in Y for a one unit change in X. In this example, a number of the predictors are binary variables (those with the 'orNot' suffixes). Thus, for these variables, a one unit change represents moving from the minimum value (0) to the maximum value (1). Variables such as Followers and Followees are continuous variables, and thus a one unit change in these X variables means something very different as they range from a minimum of zero to a maximum of (possibly) several thousand.

Accordingly, it is not possible to directly compare the estimated coefficients for different variables in a GLM model without taking into account the scale on which those variables are measured.

Not the answer you're looking for? Browse other questions tagged statistical-significance generalized-linear-model p-value or ask your own question.