Rule of thumb for the number of significant digits to report

What is a good rule of thumb for the number of significant digits to report? Preferably, the rule of thumb is given in a citable publication. I am particularly interested in a rule that does not consider the standard error or confidence interval of the estimate.

This is what I have found so far:

There are a number of similar questions here, but they ask about a rule with a known standard error. Example: Number of significant digits to report .

If this helps, here is why I need this. I am writing a package to pretty-print values (https://github.com/prettyprint/prettyprint). Too many times, the output of an analysis is too hard to read, and therefore understand. Yes, you can make it pretty using format, signif, and round, and that's basically what the package already does for you in the background.

I would like to make pretty-printing as easy as possible for the user. Sure, if they are willing to provide a standard error or confidence interval, I will use them to pretty-print the value (have not implemented this yet). However, to make it more usable for them, I also want some sensible rule when they do not provide a standard error or confidence interval. All they have to do is type pp(x), and x is printed in a sensible and user-friendly way.

For numbers in tables, A. S. C. Ehrenberg wrote:

such rounding is necessary to facilitate mental arithmetic

G. Van Belle has a table for the suggested number of "significant digits" for percentages: 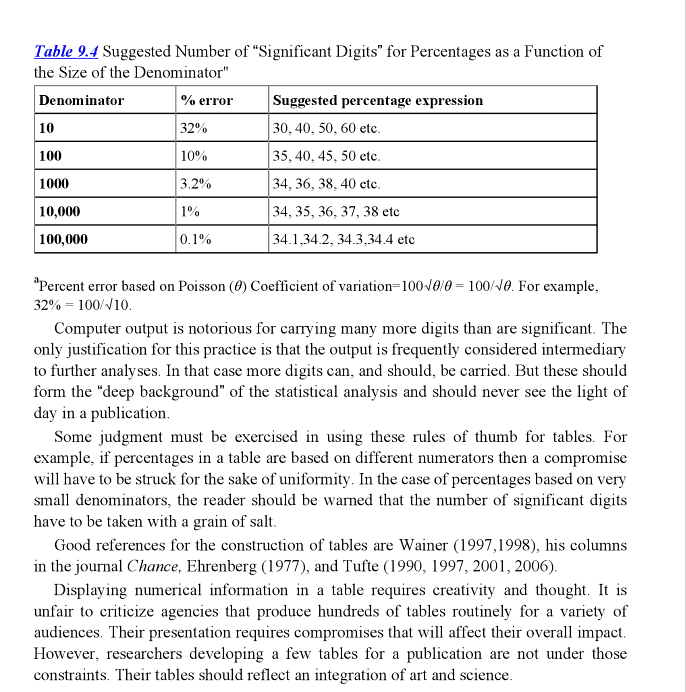 To oversimplify a bit, there are two kinds of accuracy. Engineering accuracy means two or three digits. This is generally ample for the end user like the designer of a bridge or an airplane or a medical trial or an evaluation scheme for pricing financial options. Getting more than two or three digits for end-user applications will typically be impossible, because the problem is too complex, and meaningless, since it is not defined precisely enough.

Scientific accuracy, by contrast, means five or ten digits. This is what one aims for in solving fundamental problems upon which other ideas or computations will be built. For example, the flow of air over a Boeing 767 is an engineering application, but the flow through an infinite idealized circular pipe is a scientific application. Computing the natural frequencies of a symphony orchestra kettledrum is an engineering problem, but computing the eigenvalues of an L-shaped region is scientific. One’s expectations can and should be different.

In physics, almost nothing is known to more than 10 digits. We know the gravitational constant to about 5 digits, Planck’s constant to about 7, the speed of light to 8 or 9. These precisions are not increasing very fast. In twenty years our computers will be a million times more powerful, but physics will still not know much to more than 10 digits.

Not the answer you're looking for? Browse other questions tagged r reporting rule-of-thumb presentation or ask your own question.

13
Number of significant digits to report

41
How to determine significant principal components using bootstrapping or Monte Carlo approach?
13
Number of significant digits to report
6
How to report the ratio of two sets of experimental results?
3
Should you report variance of asymmetrical data, such as ratios?
0
Confidence Interval Calculation for a small decimal numbers