What algorithm should I try to predict number of tweets

I have been collecting data of each tweet being sent out for each article. The data is like this.

What I'm wondering is what algorithm should I use to try to fit in this kind of graph to predict number of tweets happening in an hour or minute interval. 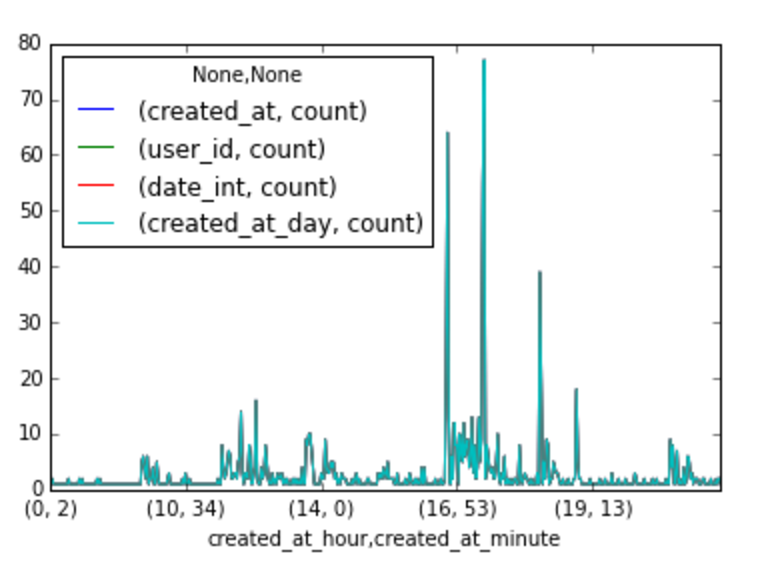 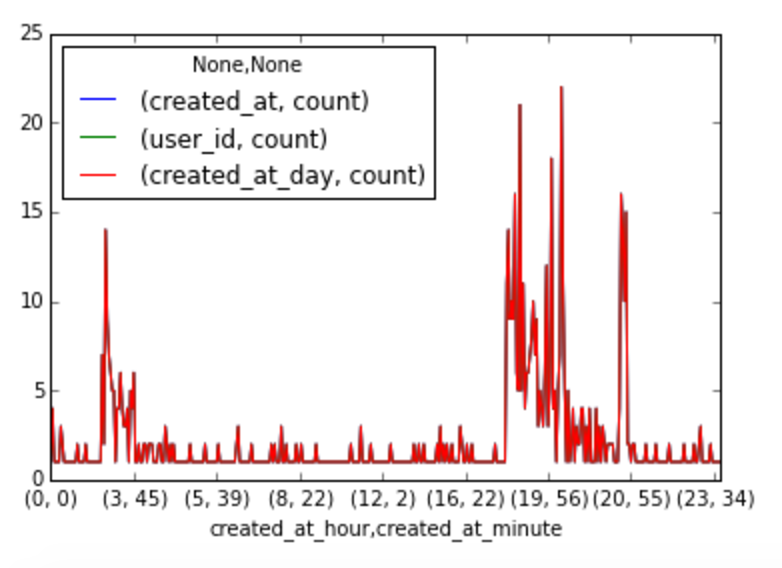 This is what I have done to produce the graph.

Smoothing (loess, MA and variations) is one option of trying to make sense, as the other responder suggests.

And it's highly likely that they are autocorrelated: an article hits Twitter in hour T, goes viral, which makes the number of tweets in hours T+k jump up as a consequence.

However, if all you have is data on tweets and nothing else, it may be hard to estimate one general model for the number of tweets en masse. As you can see on the graph yourself, it looks very very irregular. Few very big spikes, with most of the time being rather quiet.

If you could somehow group the articles into types/genres, that might help you condition the model and bring some order into it. Or bring in more data/variables.

Or, and now I am just wildly speculating, given the nature of the data, it could be an example of some highly skewed distribution (to the left, so most of the time, very few tweets are observed), but sometimes, a viral thing happens and it explodes. Which is realistic enough I guess. But you'd also need to model some autocovariance there, as one freak "draw" conditions the distribution in later times (so shifting it more to the right, making it more "normal"ish...).

It could be an interesting exercise, but I really don't know how you'd rigorously go about fitting such model (if it were, e.g. some sort of Pareto distribution or something).

Now that I think about it: logs! A log-normal distribution is skewed to the left, and if you take the log of it, you get a normal. So perhaps try taking logs of the counts (add 1 to cover 0 tweets) and fitting an autocorrelated normal distribution on the logs?

Sorry for the wild speculations :D

If you want to make a prediction, the data should follow some underlying patterns(which it should, in this case). Then you can use ARIMA to find underlying seasonal/cyclical patterns.

Not the answer you're looking for? Browse other questions tagged machine-learning time-series nonlinear-regression algorithms or ask your own question.

212
When (and why) should you take the log of a distribution (of numbers)?

22
Hypothesis testing and significance for time series
12
Correlating volume timeseries
5
How to plot algorithm runtime for huge input set?
4
Visualizing composititional time series with negative values and meaningful totals
0
How to graph throughput
3
What are the X and Y axes of Clustering Plots?
3
Time Series Forecasting, why try and predict randomness?