Why does a regression tree not split based on variance?

When choosing each split, recursively, in a regression tree, I understand that you want to measure the spread, in each side of the split, essentially.

So, in some sources, including this one at 6 minutes into the video, I see that a different form of variance is used, except the sum of squared residuals of each region is not divided by the number of points.

Is this a typical metric to use for determining where to split? A similar question here also shows the same equation.

I'm wondering why we don't divide each term by the number of points in each region, i.e. left and right of the split?

That way, the splits would get more credit for reducing the variance of MANY points in a single region, rather than weighting the error of each region the same, regardless of the number of points?

First off, let me just say that there are plenty of metrics that could be used to determine a split in the Regression Tree (that's an altogether different question) but the criterion you mentioned--minimizing the sum of squares--is definitely the most popular.

With respect to your second question (i.e. why we don't divide by the number of points in a region), here is an example that might give insight into the potential problems related to splitting based on the minimum sum of variances:

Now, try switching sum to mean in the tss function and re-run this entire block of code. Notice how different the resulting plot is?

So the best split offers the best gain. If the loss function is sum of squares the gain function could look like:

This simplified cost function will yield the same ranking of splits and is much faster to compute. It is possible to perform rolling SS computation such that, SS does not have to be fully recalculated each split. Instead the $SS_{left}$ and $SS_{right}$ are iteratively adjusted for moving one sample at the time from left node to right node. Here's an answer for RF classification where the same trick is used.

In order to compare the behavior of the different splitting formulas, let's consider a simple example: 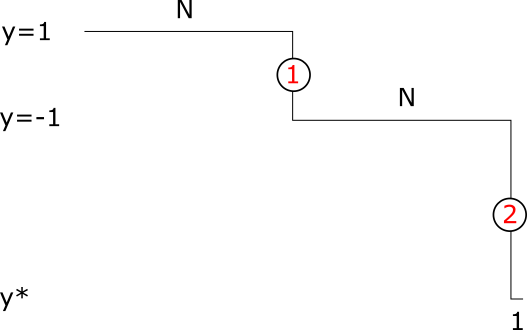 There are two reasonable split points in this scenario, first the point (1) in the middle, and the point (2) at the right boundary.

So, let's calculate how the split position changes in dependence of the value of $y^\ast$: For which $y^\ast$ is the split made at (1), or how low $y^\ast$ might get until the split occurs at (2).

For the calculations we first use the criterium the OP posted in the question, which involves the sum of squares (SS):

Now, doing the same for the version of the splitting formula which includes the variance, the result is

That is, the factor $\sqrt{2N}$ is missing. With this, the split is made at (2) if the value at the boundary is slightly lower than $-1$, regardless of the number of datapoints $N$.

Conclusion: The splitting formula using the sum of squares (SS) leads to the more intuitive behaviour that the split is preferred at point (1) in the middle.

Instead, the formula with the variance does not consider the number of particles in the respective regions, as the SS value is divided by the number of data points. As seen above, it easily prefers a split where only one data point is separated to a balanced split where the region is halfed.

It's an old question but the reason I can think of is as follows: We don't divide each term by the number of points in each region because while performing the split, we are not interested in average deviance instead we are interested in the absolute deviance; thus, a larger set of observations will usually have a larger deviance than a smaller set in the same situation.

Not the answer you're looking for? Browse other questions tagged variance random-forest covariance cart or ask your own question.

22
What is the relationship between the GINI score and the log-likelihood ratio
14
Does Breiman's random forest use information gain or Gini index?
7
How to split nodes in regression trees

5
Does Random Forest ever compare the splitting of one node to the slitting of a **different** node?
3
Regression trees with multiple input and output levels
2
Can we say that k fold cross validation reduces bias and variance as compared to train-validation-test split procedure?
13
Why is pseudo-random sampling applicable for Monte Carlo integration, even though it does not satisfy the CLT requirements?
0
Does “adding nodes one” mean “adding a layer of nodes”?
0
What is minimized/optimized when we use AdaBoost
0
R - Plotting Random Forest