'Z-standardizing' data based on Poisson process

Hello all this is my first post on Cross Validated, so please let me know if it is not in an acceptable form.

I have been attempting to analyze a data set where I have a Bernoulli process that is generating a sequence of two outcomes with given probabilities. I am calculating the average length of runs of a given outcome which I believe could be considered a Poisson process for example: 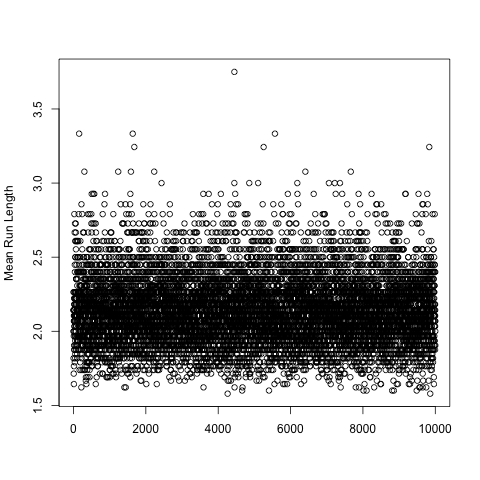 This is a plot of some fake data that I generated to illustrate the distribution.

So far I have tried using a Freeman-Tukey transformation e.g.:

But this is providing some odd output. For example if the run length in the sample is equal to the mean run length of the distribution I would assume X above should be 0 but it is not.

My question is twofold.

Run lengths in a Bernoulli process will not be Poisson.

The parameters of these two geometrics will not in general be equal (because $p$ is not always $\frac12$), so if you combine the two kinds of run-length together you'll have a "mixture" of geometrics. However, it's not quite a mixture in the normal sense because it always alternates between each type (i.e. they're sequentially dependent, not independent) - the number of runs of 0's and 1's cannot differ by more than 1.

Nevertheless for very long sequences, we can get the distribution of run lengths readily enough:

Consider simulating a set of runs with $p=0.2$:

which produces the following display of of observed log(proportions) at each run length, as well as logs of the above distribution (pmf): 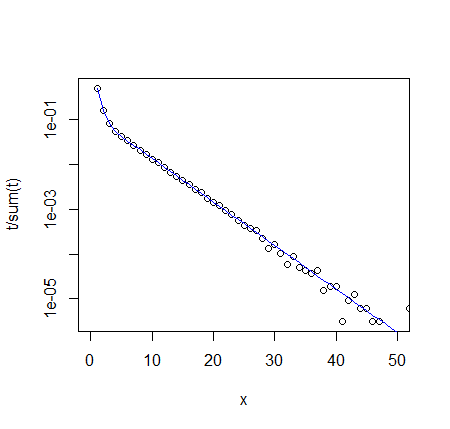 Not the answer you're looking for? Browse other questions tagged poisson-distribution standardization z-score or ask your own question.

2
How to find an appropriate standardization method for combining non-normally distributed variables?
5
How do I test how "good" my Poisson Model is?
9
Probability of an independent Poisson process overtaking another
2
Coefficient of Variation for Poisson Process
5
Distribution of successes of poisson process followed by a binomial distribution
3
Testing for a Poisson process
1
compute sample probabilities given a poisson distribution