Can my data be assumed to be normally distributed?

I have read a lot about when to use a (paired) t-test or a Wilcoxon Signed Rank Test as the non-parametric alternative but I need your help:

I have gathered some paired data and want to perform some hypothesis tests on them. Then I've calculated the differences between both groups and made a density-plot which looks like this: 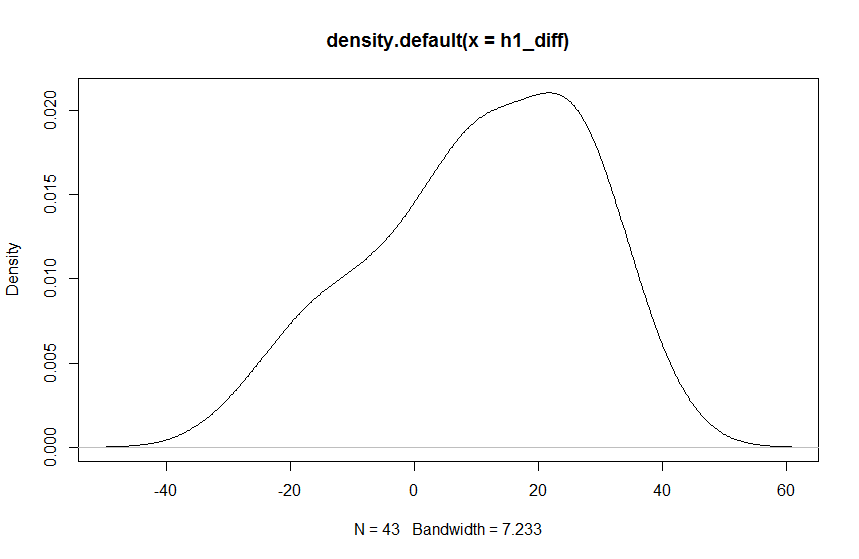 As this looks kind of normally distributed, I have also performed a Shapiro-Wilk and Anderson-Darling normality test. Both deliver p-values greater than .05 (p = .1101 and p = .0955).

Although the p-values are just a bit above the significance level and the graph is rather skewed and has no "nice" bell-shape, can I assume that the data is normally distributed based on this output? So should I perform a paired t-test or should I use the Wilcoxon Signed Rank test instead?

Although the p-values are just a bit above the significance level, can I assume that the data is normally distributed based on this output?

First, are you sure the Anderson-Darling test should be compared against 0.05? Wikipedia lists a variety of cutoffs depending on your understanding of the distribution.

I'm not sure if your data is normally-distributed (it looks skewed, but we all know that density plot is an estimate), but both Shapiro-Wilk and Anderson-Darling are null hypothesis tests. A high p-value simply means you fail to reject the hypotheses set forth by each test. In both cases, you cannot necessarily accept the distribution's normality.

Not the answer you're looking for? Browse other questions tagged hypothesis-testing normal-distribution t-test or ask your own question.