Goodness of fit of sorted data

Say I have a list of 10000 sorted counts $\ge 0$ that sum to 20000 and I want to determine that they came from placing 20000 balls randomly, independently and uniformly into 10000 cells. A straight Chi-squared test would be reasonable if I assume independence, but 10000 counts of two would be blessed by chi squared, but I'd be somewhat skeptical of independence (randomness as well). I could compare the counts with a Binomial(20000,1/10000) ~ Poisson(2), but the counts are no longer independent, so a Chi-squared test is probably no longer reasonable even if I compute the covariance matrix for the counts.

Surely this has been dealt with before. (I'm interested in the case where the probabilities are non uniform, but want to understand the simple case first)

(All the cleverness in what follows is due to Robert Israel and André Nicolas.)

This can be extended to compute the covariances (I'm working on it in my copious free time) and from there we can compute a better Chi-squared statistic. I am still not convinced that we cannot do better. I am also surprised that this is not a well known problem.

Update This is the final update (I have now gotten the algebra to cover the handwaving in the initial formulation.)

This result is kind of cute as we can use the Sherman-Morrison-Woodbury method to find the inverse (of a truncation of the infinite matrix as the inverse diverges.)

We can use the fact that if an $n$ dimensional random variable $X$ is distributed as $N(\mu,\Sigma)$ then $(x-\mu)\Sigma^{-1}(x-\mu)$ is a $\chi^2_n$ random variable. As the numbers of each count is essentially a binomial R.V. we can pretend that at least for the small counts they are normally distributed. This sugests using $(x-\mu)\Sigma^{-1}(x-\mu)$ as a test statistic, where $x$ is the number of small counts. Ignoring the larger counts has the nice side effect of making the problem full dimensional. If we do this in practice we see that if the number of bins we use is small enough, the result is nearly $\chi^2_n$ distributed.

The mean and variance look about correct

It passes the eyeball goodness of fit test. 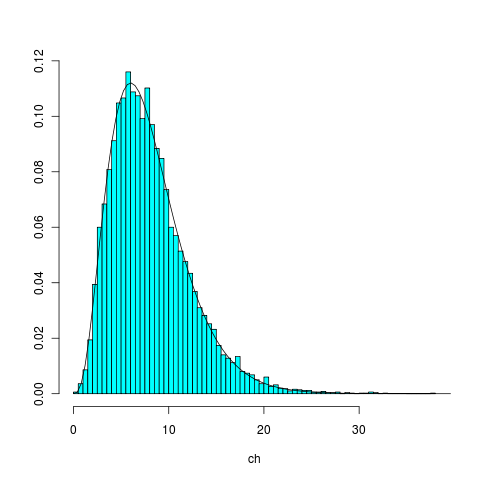 It turns out, unsurprisingly, that the distribution looks incrasingly unlike a $\chi^2_n$ distribution as $n$ increases, the tail becomes much heavier, and I am not certain what to do about that. I have tried adding all of the counts in the tail to the final bin, but that does not seem to help.

I cannot say that this test is definitely more powerful, than the straight Chi squared test, as I can find points that are accepted by one and not the other, but somehow this seems to take into account more of the structure of the problem. Intuitively this method takes into account the shape of the contours of the probability distribution. It not surprisingly places a fair amount of weight on the condition on the sum of the bins, and actually weights the higher numbered bins less than the smaller bins (the opposite of the chi-squared test).

Simulation solves the problem generally, not just for the uniform distribution case. The actual distribution is monomial, making the Poisson distribution an excellent approximation. You can test the fit with chi-square, bearing in mind that this is an approximation anyway. Its approximate nature is evident in the following results based on simulating the procedure 100,000 times. Specifically, in each trial 20000 balls were uniformly and independently placed into 10,000 bins. The bin counts were tallied and those were summarized. For example, one trial's outcome turned out to be

These bins (0..7 and >=8) were fixed for all trials so that all the chi-square statistics would have the same degrees of freedom. Notice how good the Poisson fit is.

The histogram below shows the distribution of the 100,000 resulting chi-square p-values, using 7 degrees of freedom (even though there are 9 bins). This is a little unusual--I expected 8 df, but I attribute the loss of two degrees of freedom to two reasons. First, the count for 0 is not based on any observations: it is deduced from all the positive counts by knowing the total is 10000. Second, the Poisson fit is based on the ratio 20000/10000, which is independent of the value of 10000 used to compute the zero counts. Regardless of why this loss of 2 df occurs, this convention works, as the histogram makes evident: the distribution of p-values is almost as uniform as one would like. 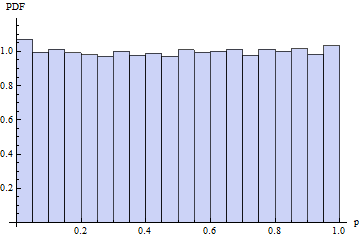 There is a slight tendency for a few very small p-values to occur, as we can see by zooming into the extreme left of this histogram (p < 0.005); the counts ought to be near 50 but they tend towards 60 as p approaches 0: 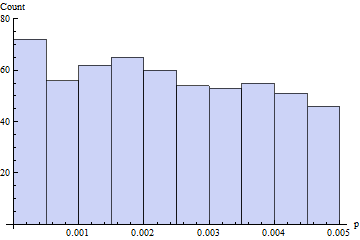 This does not seem severe enough to worry about.

I would construct my own test, and calculate the distribution of the test statistic under $H_0$ using simulation. This gets around the problem of small expected values in each cell, which will cause problems for tests that are only asymptotically correct as cell counts go to infinity, like the chi-square.

For example, you could construct a test statistic $T = \sum_{i=1}^{20000}|O_i-2|$ where $O_i$ is the observed count in cell $i$ and 2 is of course the expected count in each cell (I've simplified this expression from the general case.) You obviously can use functions other than the absolute value instead. Then in some programming language such as R you could generate, say, 10,000 samples from the null hypothesis distribution, and for each sample $j$ calculate $T_j$. You would then calculate $T_0$, the test statistic on the observed data set, and compare it to the values of $T_j$; if it's way out in the tails of the simulated distribution of the $T_j$, for example below the $2.5^{th}$ percentile or above the $97.5^{th}$ percentile, you'd reject the null hypothesis that the observations came from the null hypothesis distribution.

By making the test two-sided, as in this example, you would catch "too good to be true" fits such as your example of all cell counts = 2. You can also do this with a chi-square or many other tests by looking at the lower tail of the chi-square (or other appropriate) distribution as well as the upper tail.

Not the answer you're looking for? Browse other questions tagged goodness-of-fit or ask your own question.