How to estimate real series from smoothed moving average?

Suppose I have an observed time series $y_t$, which I suspect has been smoothed out. It appears to be significant autocorrelation at lag 1 and 2, therefore I suppose that the observed series $y_t$ is in the form:

where $x_t$ is the original series I am after.

How can I recover the "original" series $x_t$? Clearly I need a method to estimate $\theta_0$ and $\theta_1$ and then apply the relevant transformation. But how to do that? I don't see how to apply an arima process here.

Your model can be written as arima model, or to be precise MA(2) model:

ARIMA models are usualy postulated with coefficient $1$ for $z_t$, because you can always move the multiplicative constant to the variance of the disturbances.

Here is the example in R:

You can recover $x_t$ as residuals of the arima model: 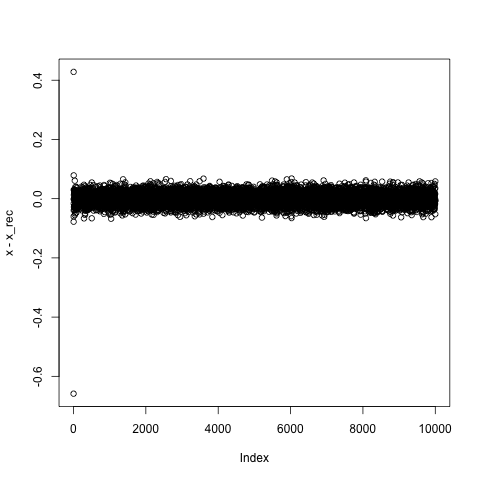 As you see the procedure recovered coefficients with the precision of 3 decimal places. The recovered $x_t$ is also recovered to similar precision. The difference is the initialisation. ARIMA model assumes that the process is infinite, but the data is never infinite, so each estimation procedure must assume some initialisation. As evidenced from the plot the first few elements of recovered $x_t$ have the biggest error, but then the error stabilizes.

Since ARIMA models are estimated via Kalman filter procedure, you could implement it yourself with the proper intialisation. Note that in this example I used quite a big sample of 10000 elements. Less data would result in worse precision, you should run some tests to see the extent of the impact of sample size to the precision of recovery.

where $e_t,u_t$ are errors. If these equations make sense to you then, you can estimate them using Kalman filter, see example here.

Next, you test whether $\theta_0+\theta_1=1$, if it holds statistically, then maybe your specification holds, so you can proceed with a constrained fit.

You have to set the expectations though: smoothing leads to data loss, generally. So, you can't reproduce the original series exactly. That's why using Kalman filter we had to make an assumption about the observed and true processes, i.e. we needed to inject some outside data to compensate for lost data (from smoothing) in order to recover the true series.

Not the answer you're looking for? Browse other questions tagged time-series estimation matlab arima moving-average or ask your own question.

3
How to interpret lags in cointegration test for constructing the mean reverting series
10
Nonstationary solutions for stationary ARMA equations
3
Fit an ARMAX model in R
1
How to estimate an unobserved variable?
0
Should I change the lag order after including an exogenous regressor in ARIMA?
1
Stationarity and trends in ARIMA models
3
Stationarity and Ergodicity - links
0
ML model to forecast time series data