I was recently commenting on game mechanics, when I realized that I actually underestimated this particular part.

Given an unbalanced die (in this case, some of the sides are 0), what is the expect number of rolls to reach a total sum of N.

Let $N$ be the number of rolls it takes to reach a total of $T=24$ or greater using a die $X$ with non-negative integral values. Suppose $n \ge 0$ rolls have occurred and the value of $T$ has not yet been reached. Let $p_n$ be the probabilities of the totals, which therefore range from $0$ to $T-1,$ and set $p_n(T)$ to be the chance $T$ has already been reached. Because this is an exhaustive description of the possibilities, $p_n$ is a probability distribution. (This describes a stopped process.)

The next roll updates $p_n$ to $p_{n+1}$ by adding the random variable $X$ and capping its results at $T.$ This addition is performed by means of a convolution of the distribution of $X$ and $p,$ thereby requiring $O(T\log(T))$ effort, because all probabilities associated with totals of $T$ or greater may be ignored.

The expected number of rolls to attain $T$ will be somewhere around $T/E[X],$ as suggested in the question. Thus, this calculation will need to be repeated around that many times, resulting in $O(T^2\log(T)/E[X])$ effort, which is practicable for $T/E[x]$ up to many thousands.

This gives us full information about the distribution of $N.$ In particular, its expectation is

Here, for instance, is the survival function for the example in the question: 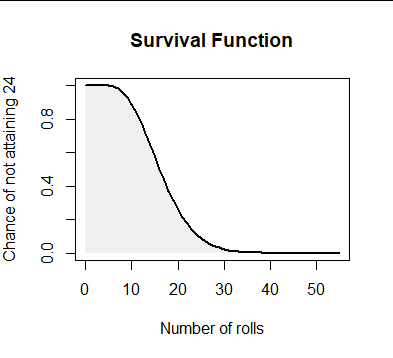 As proof of concept, here is R code to carry out the calculation for the example in the question. Its arguments are a representation of the die (a vector of its possible values) and the target value. Its output gives values of the survival function at $n=0, 1, 2, \ldots$ up to a point where cutting off its infinite tail likely makes an error less than a specified small threshold value.

The expected number of rolls is the sum:

Incidentally, for an ordinary die, the expected number of rolls to reach $24$ is a little greater than $7:$

The expected number of rolls of a normal (and fair) six-sided die (i.e. the uniform case you mention) to reach a total of at least 24 is not 7; that's an underestimate -- several million simulations indicates it's actually about 7.33

Several million simulations also indicates that the expected number of rolls for your modified die to reach at least 24 is about 17.19.

Not the answer you're looking for? Browse other questions tagged expected-value dice or ask your own question.

3
Mean number of throws to exceed a threshold

6
Chi-squared distribution for dice not returning expected values?
10
Expected number of dice rolls require to make a sum greater than or equal to K?
3
Proof of Algebraic Formula for the Sum of Two-Dice Toss as a Convolution
11
How to calculate the probability of the outcome of this convoluted dice rolling mechanic?
0
Expected rolls to get n result k times non-consecutively
4
minimum number of rolls necessary to determine how many sides a die has
16
Expected rolls to roll every number on a dice an odd number of times
2
How many rolls required for 90% chance to reach expected values of consecutive dice rolls in tabletop game?