I’m new to Granger Causality concept. I know that the “Granger causality” is a statistical concept of causality that is based on prediction. According to Granger causality, if a time series X "Granger-causes" (or "G-causes") a time series Y, then past values of X should contain information that helps predict Y above and beyond the information contained in past values of Y alone.

Suppose we have two time series;

The following table shows samples of X,Y over time: 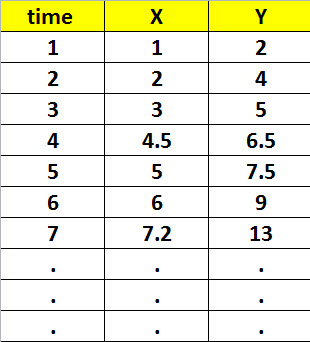 A non-linear Granger causality test was implemented by Diks and Panchenko (2006). The code can be found here and it is implemented in C. The test work as follows:

This null hypothesis is a statement about the invariant distribution of the vector of random variables $W_t = (X_t^q, Y_t^p, Z_t)$, where $Z_t=Y_{t+1}$. If we drop the time indexes, the joint probability density function $f_{X,Y,Z}(x,y,z)$ and its marginals must satisfy the following relationship:

They proposed the following estimator for $q$:

In the case of bivariate causality, the test is consistent if the bandwidth $\varepsilon$ is given by $\varepsilon_n = Cn^{-\beta}$, for any positive constant $C$ and $\beta \in (\frac{1}{4}, \frac{1}{3})$. The test statistic is asymptotically normally distributed in the absence of dependence between the vectors $W_i$. For the choice of the bandwidth, Diks and Panchenko (2006) suggest $\varepsilon_n = max(C_n^{-2/7},1.5)$, were $C$ can be calculated based on the ARCH coefficient of the series.

There are other tests of non-linear Granger causality such as in Hiemstra and Jones (1994), but this test in particular suffers from lack of power and over-rejection problems, as stated by Diks and Panchenko here.

As pointed out by @RichardHardy, you should be careful about using local density estimation in small samples. Since Diks and Panchenko showed that in samples smaller than 500 observations their test may under-reject, it would be wise to make further investigations in case the test does not reject the null hypothesis.

Transferring the notion of Granger causality from VAR to other models does not seem to have intrinsic contradictions. The basic principle when testing for Granger non-causality is to build a model that allows for a contribution of lagged $x$ towards predicting $y$ (besides lagged $y$'s own contribution), and testing the null hypothesis that the contribution is zero (by checking its statistical significance). If $x$'s contribution is too large to be written off to pure chance (is found to be statistically significantly different from zero), Granger non-causality is rejected; otherwise it is not.

The answer by @RegisA.Ely provides a very comprehensive way of testing, and I appreciate it. However, I have some reservations over how effective it might be when applied in small samples. My approach is more general and therefore should be applicable in small samples, too. That is, for a small sample, a "small" model would be used to avoid estimating complicated structures that need large sample size for decent estimation precision.

Not the answer you're looking for? Browse other questions tagged regression time-series nonlinear-regression causality granger-causality or ask your own question.

0
What is Granger Causality and how to determine it?