I would like to understand the basic concepts of probabilistic neural networks better. Unfortunately so far I have not found a resource which answers all the questions I have. So far my understanding and my questions are as follows:

PNN are easy to understand when taking an example. So let's say I want to classify with a PNN points in 2D and my training points are the blue and red dots in the figure: 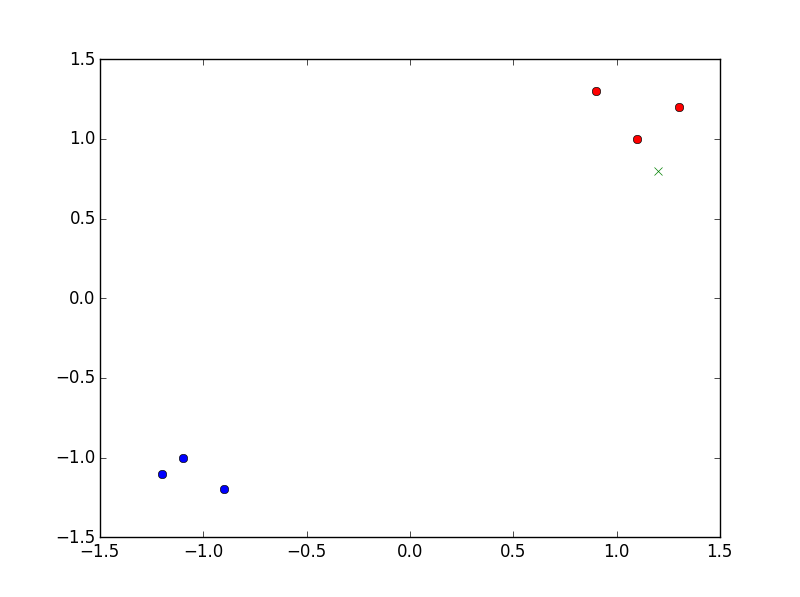 I can take as base function a gaussian of variance, say 0.1. There's no training in a PNN as soon as the variance $\sigma$ of the Gaussian is fixed, so we'll now get to the core of your questions with this fixed $\sigma$ (you could of course try to find an optimal $\sigma$...).

Here you can see that every blue point will have a gaussian (with variance $\sigma=0.1$) equal to 0 whereas the red ones will have quite high values. Then the summation of all the blue gaussians will be 0 (or almost) and the red one high, so the max is red label : the green cross is categorized as red.

As you pointed out, the main task is to find this $\sigma$. There are a lot of techniques and you can find a lot of training strategies on the internet. You have to take a $\sigma$ small enough to capture the locality and not to small otherwise you overfit. You can imagine cross-validating to take the optimal one inside a grid! (Note also that you could assign a different $\sigma_i$ to each label e.g.).

Here's a video which is well done!

1
Moving from support vector machine to neural network (Back propagation)
2
Calculating gradient in a neural probabilistic language model
1
How do I calculate output of a Neural Network?
1
Step-by-step construction of an RBF neural network
4
Understanding Recurrent Neural Networks
2
Fitting a neural network with more parameters than observations
2
Neural network: Why can NNs have identical structure in the hidden units and still learn?