I have a transition matrix P,i don't understand how my teacher explains properties of the states without any calculation. In example :

It seems there has been some miss understanding, since all the statements you made are wrong for the given Markov-chain.

All of these concepts are very well explained on the Wikipedia article on markov chains. I highly recommend you read the corresponding sections.

where a * stands for positive probability for that transition.

Now, draw the state transition diagram of the Markov Chain. 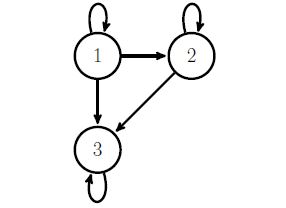 Class {2} can be interpreted in a similar manner.

Not the answer you're looking for? Browse other questions tagged markov-process or ask your own question.

17
Check memoryless property of a Markov chain
1
Identifying the communicating classes and stating whether they are period, aperiodic, recurrent or transient
2
Classification of states in Markov Chain
1
Reducible Markov Chain with a state that communicates with nothing
5
Aperiodicity in markov chain
7
Markov chain,transition matrix and jordan form
2
Irreducible markov chain problem
0
stationary distribution of a markov chain