How can I use bayesian reasoning to explain a Scrum team if they initial estimates were right or wrong and if the project is currently delayed or not?

Imagine a software development team estimates they are going to be able to complete 80 user stories in 5 sprints using Scrum:

But after the first 3 sprints, things look like this:

Is there a way to use Bayes rule to update the original idea that there was only a 5% chance that the project will be finished on after the 5th sprint? What is the chance now? Would it had been possible to calculate it after the first sprint differed from the estimate?

Assuming sprints behave as they have behaved in the past... What is the way to calculate the number of sprints that are needed to finish the project so that there is only a 5% chance that more sprints are needed?

Update: Based on the first received answer against the original question, it seems that I am not providing enough information to solve using Bayesian reasoning. So here is a little more data: Instead of saying that the team believes there is only a 5% chance they will need more sprints to complete the project lets say that they use the PertDistribution to describe their uncertainty, and they describe it like this:

The 5th percentile of this is 15.3 which (am I wrong?) means that there is only a 5% chance they will build less than 15.3 stories on each sprint.

Given this new information: Is it possible to use Bayesian reasoning to adjust the distribution based on the experienced outcomes and refine the PertDistribution parameters to match the actual behavior of the project?

Is ther right strategy (most conservative) then to first update the PERTDistribution to have a minimum of 7.9 right after the first sprint? (to reflect the fact that 8 stories was not "impossible"?)

First, your question is very interesting from a curiosity perspective, but I doubt the answer will help the team get more consistent. It could show them they were wrong, but it does not mean they will learn to get better estimates. It might just add tension to the already late project.

Instead of bringing them measurement of how wrong they were, you could try to bring them a possible solution; Evidence Based Scheduling, by Joel Spolsky is an excellent article about how to incorporate probabilities and predictions into time estimates, and how to manage consistent but bad estimates.

Bayes Rule: can we update our belief?

Assuming the 5% estimate is "the truth", can we refine our information knowing the start of the project?

Bayes rules tells us that

From the following set of equation,

We can get this expression,

Why it is hard: without any assumption, we do not know the probability distribution of $S_4$ and $S_5$. We do not know how $S_{1,2,3}$ might influence $S_{4,5}$. The main different with the coin experiment (Wikipedia) you cite in your comment is the following; For the coin, each flip samples the same underlying distribution. The probability that the coin lands head does not depend on the last flip. Your data, on the other hand, is a time series. It is likely that the output of the team in one sprint influences it's output in another sprint. It is also likely that external factors that are not measured alter their output. In this sense, each coin flip is an experiment but measuring the output at a single sprint is not. Ideally, for this kind of task, you would want to have reports of past project, and the number of story done at each week and try to model the trend. If your objective is to predict $S_4$ and $S_5$, you do not have any exemple or any data, just assumptions.

But we can work with assumptions. The assumption you gave in your original question was that "Sprints behave the same as they did in the past". One interpretation would be: At any given week, the teams output follows the same probability distribution, let's say a Normal distribution $\mathcal{N}(\mu,\sigma^2)$, and each week is independent from all the others. Let's roll with it.

We can estimate the parameters (Wikipedia) of the distribution.

Even when assuming that every sprint comes from the same distribution and is independent from the other sprints, which is not a "trivial" assumption, the precision of our model is not that great since we have only three points.

Under the assumption that the number of story completed at each sprint are i.i.d. and follow a Normal distribution, using only the data we got for the first three weeks, we can say with 95% confidence that the probability of finishing the project in time is less that 1.4%.

This assumes that nothing changes between sprint, and will not change until the end of the project. So this estimate might be a little bit pessimistic. Also, we ignored that the team had an initial estimate of 5% of success.

Adding the team estimate If we assume that their estimate is true, that there was indeed a probability of 5% of delay at the beginning, and if we continue to assume that each sprint is independent from the other and follow the same Normal distribution, we have that 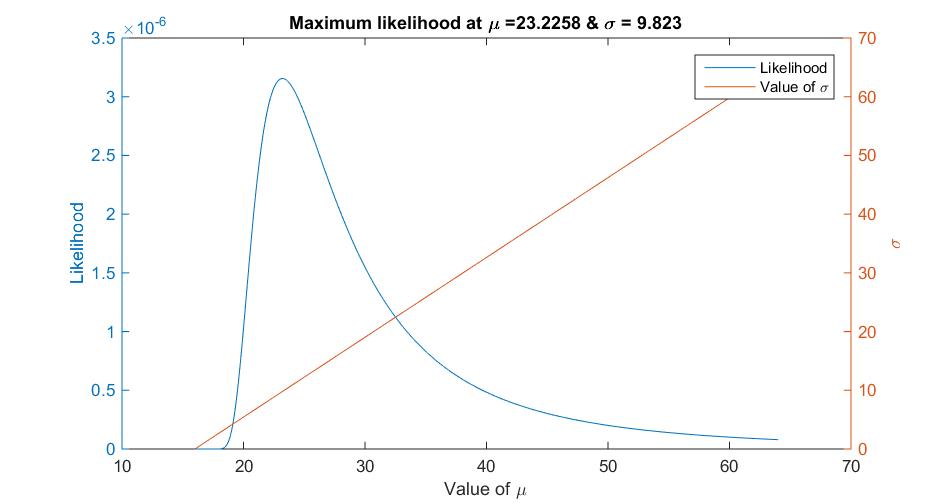 Oh, by the way, this new probability is not saying that their initial estimate was wrong, on the contrary, it assumes that it is right! It is an update of it, knowing that the first three sprints went $8,8,12$.

What confuses me is the "I don't think we can do 26,26 at $S_4,S_5$". It seems intuitively obvious that a human would think it is unlikely after 8,8,12, but under the probability distribution configured with the assumptions you described, it does not seem unlikely.

In both scenarios I described, (Finding the distribution from the data, or from the initial probability estimate + the data), it is very unlikely that the team will do 26,26. But it is not impossible.

You wrote "using only the data we got for the first three weeks, we can say with 95% confidence that the probability of finishing the project in time is less that 1.4%" How come, if there is only 1.4% chance that that it is finished in time, there is only 5% chance that is delayed ? Isn't that a contradiction?

Not the answer you're looking for? Browse other questions tagged bayesian estimation prediction-interval project-management or ask your own question.

1
Long term probability of a game with multiple outcomes?
2
Is there an formula to translate a Beta distribution back to a Pert distribution? Or is simulation the only way?
0
What is the likelihood that the first of N unlikely steps occurs in the first 1/Nth of the total time, given that all N steps succeed?
3
Is it OK to update binomial probability with new data?
0
Is this a correct use of Bayesian statistics when choosing a box A-E?
6
How to optimise waterfall questions of purchase value
0
Real-time Bayesian updating. How to link posteriors?