When to use regression trees/forests?

As I was looking for a fine regression algorithm for my problem. I found out one can do that with simple decision trees as well, which is usually used for classification. The output would be something like: 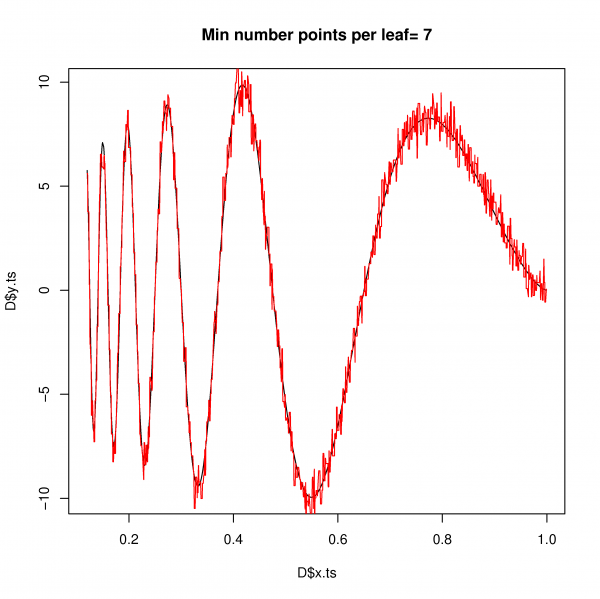 The red noise would be the prediction states of such a tree or forest.

Now my question is, why at all to use this method, when there are alternatives, that really try to figure out the underlying equation (such as the famous support vector machines SVM). Are there any positive / unique aspects, or was a regression tree more a nice-to-have-algorithm?

As your figure exemplifies, single decision trees would under perform SVM in most problems. But an ensemble of trees as random forest, is certainly a useful tool to have. Gradient boosting is another great tree derived tool.

SVM and random forest(RF) algorithms are not alike, of course. But both are useful for the same kind of problems and provide similar model structures. Of course the explicitly stated model structures of forest/trees as hierarchical ordered binary step-functions are quite different from SVM regression in a Hilbert space. But if focusing on the actual learned structure of the mapping connecting a feature space with a prediction space the two algorithms produce models with similar predictions. But, when extrapolating outside the feature space region represented with training examples, the "personality" of the model takes over and SVM and RF predictions would strongly disagree. See the example below. That's because both SVM and RF are predictive models, your can see that both SVM and RF did a terrible job extrapolating.

So No SVM is not trying to figure out the underlying true equation and certainly not anymore than RF. I disagree with your platonist view-point, expecting real life problems to be governed by some algebra/calculus math, that we humans coincidentally happen to teach each other in high school/uni. Yes in some cases, such simple stated equations are fair approximations of the underlying system. We see that in classic physics and accounting... But that does not mean the equation is the true hidden reality. The "all models are wrong, but some are useful" would be one statement in a conversation going further from here...

I does not matter if you use SVM, RF or any other appropriate estimator. You can always inspect the model structures and perhaps realize the problem can be described by some simple equation or even develop some theory explaining the observations. It becomes a little tricky in high dimensional spaces, but it is possible.

In general rather consider RF over SVM, when:

Not the answer you're looking for? Browse other questions tagged regression machine-learning svm random-forest or ask your own question.

8
Ideas for outputting a prediction equation for Random Forests
7
What do these decision boundaries indicate in random forest and svm?
3
Machine Learning Methods for Binary Classification
1
Machine Learning methods / Regression Trees for Longitudinal/Panel Count Data
1
Random Forest for Regression: How does a decision tree decides the value of a terminal node when outcome is many continues values?
1
How does the voting work in a random forest
9
How to make the randomforest trees vote decimals but not binary
1
Aggregation of “tree results” in random forest regression
1
Can a decision tree make a decision based on two variables at one split?