I know all the numbers, but I don't know which numbers belong to which group. Is it really possible to give a proper answer to this question?

As I understand your question, you have a vector of datapoints that come from two distributions $f_X$ and $f_Y$, where you do not know their group memberships. You can think of this data as of mixture of $f_X$ and $f_Y$ distributions and to solve it you can use one of the clustering algorithms designed for such problems. The simple non-parametric approach would be to use algorithms such as k-means, but you could use also model-based approach such as finite mixture model (e.g. Mclust). It is not a problem for either of the algorithms that the values are shuffled.

Let me illustrate those approaches with an example with simulated data. 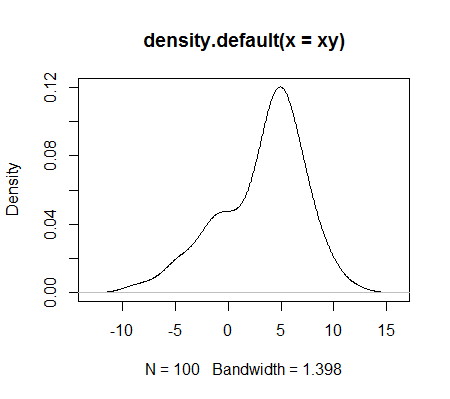 For this dataset k-means returns

Each of the methods classified correctly group membership 78-79% of cases. In this example groups were equal-sized but this does not have to be the case for any of the algorithms described. If you have knowledge of variances in both groups this would make estimation easier. Here it was assumed that both groups are normally distributted, but you can make other distributional assumptions in finite mixture model as well. It is most popular to use E-M algorithm or Bayesian approach to estimate finite mixture models.

Not the answer you're looking for? Browse other questions tagged clustering group-differences mean or ask your own question.

404
How to understand the drawbacks of K-means
14
Are there any non-distance based clustering algorithms?
2
Fit mixture of distributions to your time-series data in R
0
Composition of Normals — Finite mixture with some known parameters

3
How to compare two groups on a set of dichotomous variables?
1
Compare means of two groups with a variable that has multiple sub-group
0
Cluster two feature samples with no knowledge of the number of clusters
0
Randomized groups for A/B testing
1
Trying to get the relative difference between two groups with negative values