What is the relevance of standard deviation?

I do a humanities subject but have a statistics based analysis of a rating experiment and cannot get my head around standard deviation.

What on earth does SD represent here? I know that it is about dispersion but I don't get whether the SD is low or high here.

So yes, as you suggest in comments, a small SD indicates that most of the distribution is close to the mean.

If the standard deviation is in the ballpark of about 0.7-1, then a typical rating is about 1 point away from the mean.

Generally speaking there's no absolute standard of "large" or "small" for standard deviations (it depends on what you're doing, what the values are measuring, and on a number of other things) -- but with ratings on 1 to some maximum (like 5) there is a "biggest possible" standard deviation, which is half the range*. Since the range is 4, a standard deviation of 2 is definitely "big", representing essentially complete (and even) polarization into 1 or 5 ratings.

Here's a few examples to give some basis for comparison: 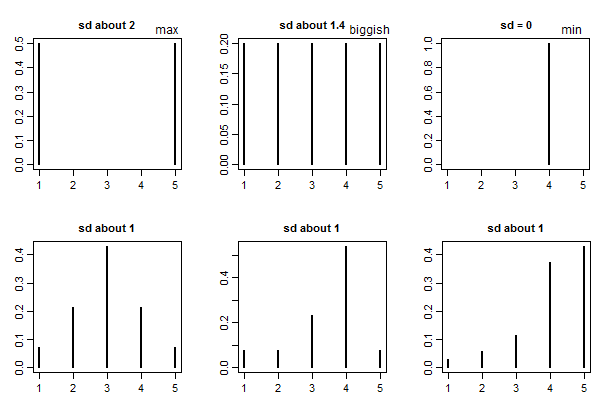 Not the answer you're looking for? Browse other questions tagged standard-deviation mean or ask your own question.

4
What does the size of the standard deviation mean?